Another day, another cold weather outfit! At least this time it isn’t another tea dress and boots, I do like to surprise you all occasionally….

This is another outfit worn amid the chaos and panic that ensued upon the arrival of The Beast From The East! Holy cow, was it cold that week! I really had no choice but to wrap up as warm as possible (I obviously also wore a coat…), and this is one of the thickest, snuggliest jumpers I own. It certainly did the job – a little too well actually, because my office actually has a weird micro-climate all of it’s own and was strangely warm that day, except for the toilets which appeared to have an Arctic gale blowing down the corridor…. Anyhow, warm it might be, but it is basically just a wooly black jumper and not the most interesting or feminine pieces, so I felt like the ensemble needed something else to dress it up a bit and feel more ‘me’, especially since I also had to wear those flat boots again in case of a deluge of snow!

It felt a little too chunky to go with something floaty, so I went instead with this little mini skirt, gifted to me by my Sister last Christmas. It’s a lot shorter than I would normally wear to work, but given how bundled up I was I was confident I wasn’t flashing enough to be inappropriate! I also dug out this hat, which by some miracle was an exact match to the beige threads in the skirt, which was a happy coincidence really, as I only went looking for one to stay warm!

Anyway, it did the trick and I stayed snuggly warm all day, while still managing to feel a little girly at the same time! 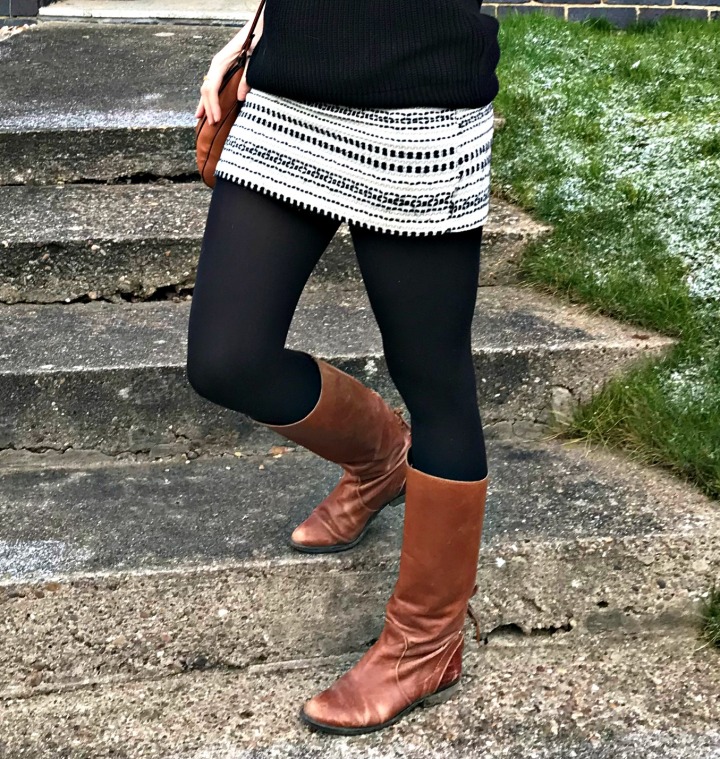 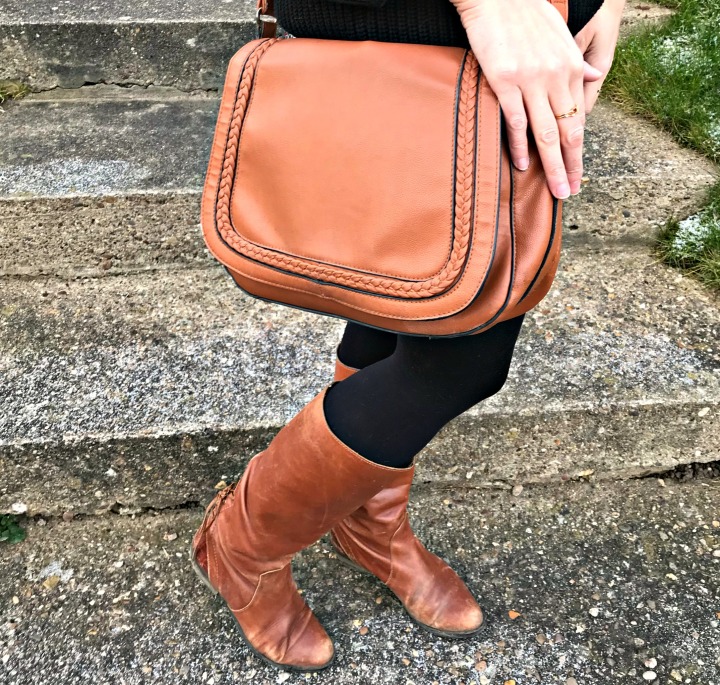 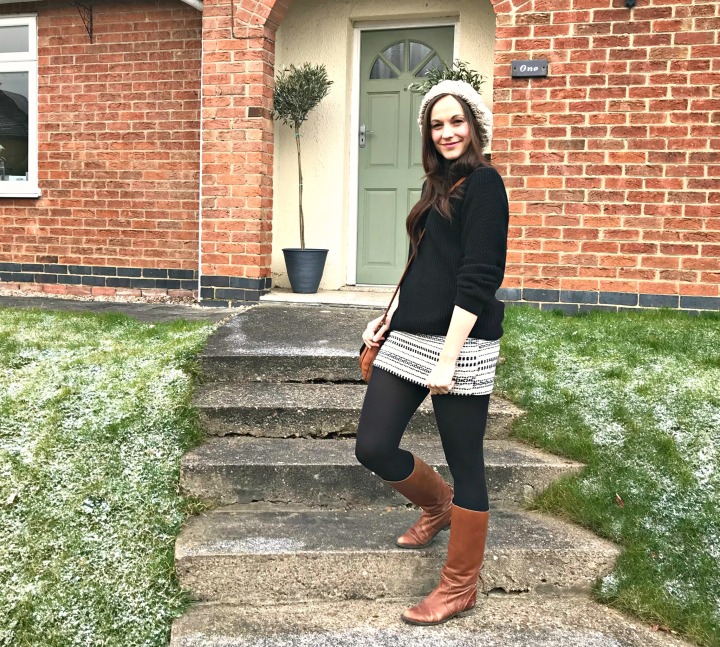 How have you guys been faring with the cold?

7 thoughts on “Outfit: The Winter Mini”

This snow is confusing my brain. I know I said I was ready for winter but I’m not sure I was quite prepared for it to be this cold yet! At least it makes me feel better about slumming it on the sofa all day!
We started Christmas shopping at the weekend! Or attempted to… getting out of the house with three under three is… interesting! We didn’t have the most successful trip. There were poo incidents. Vomit incidents. Lots of crying and a very awkward visit to an M&S cafe where three trips to the baby change were required! Think we spent longer in there than actually shopping! It was pretty hellish. But we did manage to make a start and the main thing is, we did it! Sometimes it will work out, sometimes it will be a disaster, but despite all the dramas getting out of the house felt so good. And now that Bailey has had his PCR come back negative hopefully we’ll be doing a lot more of it!
I wore completely ridiculous shoes today (save 173/188). Bailey woke up with a raging temperature last night so we are awaiting the results of a PCR test and I thought I might as well prepare for isolation by wearing clothes I have no intention of leaving the house in! I’m no longer wearing any of this outfit though. First I had a red jumper on, which Jesse threw up on. So I changed into this one, and he threw up on that too. So I changed again, then Taylor pissed on these trousers so now I’m in mum jeans and a baggy old cardi. Oh, and the ridiculous shoes have come off because it’s pelting it down with snow again. And that pretty much sums up my life right now… Keep you fingers crossed for negative results 🤞
This time last year we were celebrating the first of our would be wedding days. Today feels eerily de ja vu like, with a new c-word variant rampaging, restrictions being ramped up again and worrying about whether our Christmas plans will happen. Plus, we still aren’t married! But the major difference is that as I write this two new baby boys are sleeping soundly on my chest. So strange to think that when we took this photo life seemed so up in the air and we were completely oblivious as to what was to come for us over the next 12 months. And who knows, were it not for the crappy turn of events that was 2020 maybe these little guys wouldn’t be here? So it’s kind of hard to feel too sad about how things turned out really. Keep smiling, everyone. No matter what comes to be over the next few weeks life still finds a way to bring us joy ❤️
Tis the season to take gloomy indoor outfit shots because you forgot to take one before you left the house this morning…
VERY excited boy watching the snow this morning! I can’t believe how much he remembers from the snow we had at the start of the year!
Loading Comments...
%d bloggers like this: