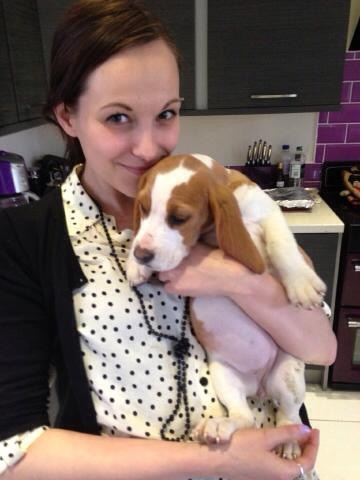 I wasn’t quite sold on getting a puppy at first. It wasn’t that I didn’t want one. OF COURSE I wanted one – it’s a freakin’ puppy! But I was massively concerned that maybe I wasn’t grown up enough yet to have this tiny, defenseless thing in my house that was completely dependent on me. I was worried we might not have the time to spare. I was worried I didn’t know enough about dogs, never mind puppies. I was worried in case we got one that just seemed to hate me. Or that I would hate the puppy, then I’d have to be one of those awful people that actually gives it back after a few weeks and everyone declares THE WORST PERSON EVER. There was just something that seemed inconceivable about the idea that I could get a puppy, like I kept on forgetting that I was actually 30 years old now, and could basically do what I wanted. I was so convinced by this, that when I told my parents we were thinking about it, I fully expected them to scold me for being so ridiculous as to think that was something I was capable of. But they didn’t. They were excited! And just like that, I couldn’t think of a reason NOT to get one! 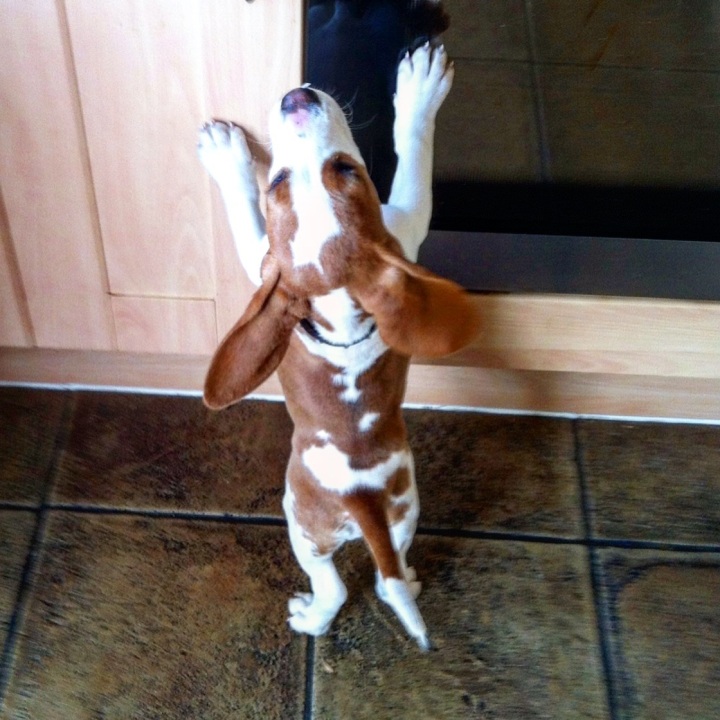 Then we were offered one. Well, it wasn’t strictly a puppy – it was a 10 month old Beagle boy who had been causing a bit of chaos in a home that really hadn’t done their research and somehow thought that coping with a young, notoriously mischievous dog like a Beagle at the same time as having a newborn baby was a sensible idea…. A friend reached out to me because they knew we were considering a Beagle and thought we might be willing to offer him a home. After a bit of a chat we decided to give it a go! But then we discovered the guys friend had convinced his wife to give the pup another chance and he was no longer looking for a new home. Gutted. I was actually shocked at how gutted I was, in fact. I’d only decided I was ready to take the plunge 5 minutes ago, but the realisation that this one wasn’t to be was a bit of a blow. Well, that was just the catalyst we needed, and within a week we’d found a breeder with some pups available and were on our way to see our Bons!

I’ve never really believed in the whole love at first sight thing, but honestly, how anyone could not fall for those sweet, squashy faced, floppy eared beauties is beyond me. She was every bit as adorable as I imagined she’d be, and from the first time she wriggled in my arms, all pot bellied and wrinkly, all the concerns I had about how we’d cope went out of the window and I knew she was supposed to be ours. We told the breeders we needed to think about it, but it was all a lie – before we’d even gotten home we’d already made plans to collect her that Sunday, and the deal was done – within 48 hours I was a bonafide dog owner! We were so excited that it was a week or so before we even read her paperwork and realised that she had actually born on my 30th birthday, which just cemented for me the fact that we were destined for each other.

It wasn’t easy at the start – I’ve written in depth about this before, but getting a puppy is an intense experience. Her arrival wasn’t quite the homecoming I had pictures, this poor, frightened little being covered in pee, poop, vomit and drool was thrust into my surprised hands on day one after a traumatic car journey and spent the first few hours cowering under the table. I felt so sad for the little mite that I questioned whether or not it was really the right thing to do, tearing her away from her family like that, but it wasn’t long before she was curled up sleeping in my lap, and the bond was formed. Then of course there was the first night – that awful few hours lying awake listening to her cry, desperate to give in and bring her to bed with you but knowing all the experts warn not to. And for the first 6 months she was ON! LIKE, ALL THE TIME! Her need for attention was simply constant and at times I genuinely wondered whether or not we’d made a mistake. I won’t dwell on that all too much today though, because the point of this post is actually that 5 years on – it was officially her ‘Gotcha’ day on Saturday – whatever trials and tribulations we’ve been through, I just couldn’t imagine life without her. Things didn’t work out the way we expected. Ollie and I didn’t make it and I never imagined I’d be moving her out to the countryside. But one thing is for sure – no matter how annoying she can be when she has her mad hour at 10pm or tries to dig up my newly planted sweetpeas, she is hands down the best decision I ever made. I love how she snuggles in for a cuddle when I let her in in the mornings (yeah, that whole not letting the dog in the bed thing didn’t stick. So sue me…). I love how happy she is to see me when I get home even if I just popped out to buy milk. I love watching her bound, gazelle-like, through the long grass when the fields are grown out to meadow. I think it’s adorable when Dan and I go in for a hug and she gets jealous and wants to squeeze in too, and when she whimpers and runs in her sleep. Sure, she has her flaws, but I love her so unconditionally that I wouldn’t change her for the world.

I was completely unprepared for how much this sweet little thing would consume my life in the best way possible. She is my baby and my bestie all rolled into one, and I thank my lucky stars that she is mine.

Happy 5 years Bonnie! Thank you for making me smile everyday, no matter how crappy it’s been.

5 thoughts on “Reasons to be Cheerful – 5 Years With My Pup!”