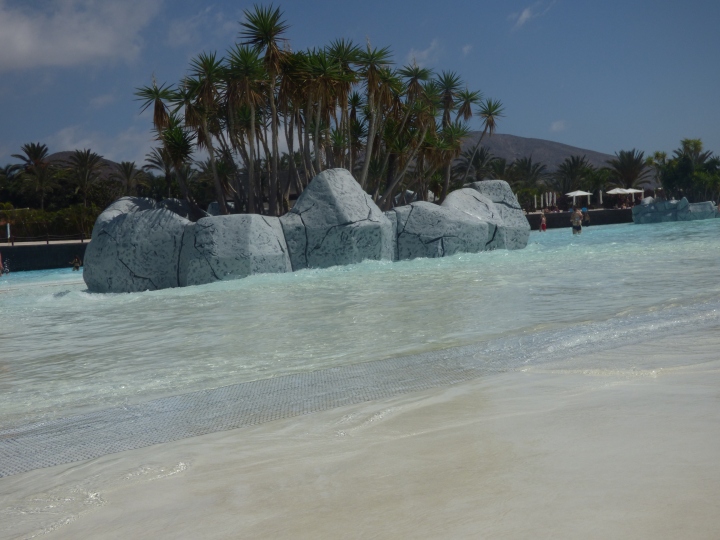 On the whole, Dan and I are a great pairing when it comes to holidays. We both want somewhere nice, that doesn’t cost the earth. We both value food extremely highly – possibly a little more highly than is reasonable in a human being. And we both want just the right combination of relaxation versus fun things to do. Every now and then though, our idea of ‘fun things to do’ differs slightly.

Dan’s childhood holidays, it seems, were largely comprised of trips to waterparks if his nostalgic stories are anything to go by, which make it the perfect activity as far as he is concerned. My childhood holidays were definitely not comprised of trips to waterparks. Mainly because my childhood holidays were largely comprised of shivering on a beach in not so sunny Scarborough, truth be told. But also because water parks have never really been my thing. I can swim well enough, but I’ve never really been particularly confident in the water. I hate being out of my depth or having water suddenly splashed in my face, so they just don’t have a huge amount of appeal. Pools are for lazing next to and the odd quick dip to cool off in my book, not white knuckle rides! So I wasn’t all that keen when he got all excited that Siam Park was right next to our hotel. Apparently, as he excitedly told me, it was rated the number one waterpark in the world! I immediately scoffed at this idea, certain that the best waterpark in the world was surely somewhere more exciting like Singapore or Australia, not little old Tenerife, but then he showed me the Tripadvisor reviews and I had to eat my words… So, after I admitted that I really had made him walk around an awful lot of Zara stores, I accepted my fate and agreed to go.

Spoiler – I freaking loved it! You know I hate being wrong, but turns out I’ve been missing out this whole time! Waterparks are actually AWESOME!! We had the best day, dashing around the rides, meandering along the lazy river (once we eventually found the entrance – man they keep that hidden away!), visiting the sea lions and hanging out at hands down the most unbelievable pool I’ve ever seen – I was even pretty brave as it turns out! I managed to go on almost every ride bar the Tower of Terror which was just a little too much for my nerves… So it seems I’m now a total convert, and I think you should be too! Here are my top tips if you’re planning a trip in the near future!

Speak to the locals

Being the bargain hunters that we are, we like to do our research and spent quite a lot of time reading reviews and advice from other travellers. A lot of the comments we read warned that it wasn’t worth the money unless you bought a fast pass (which allows you to jump the queues) if you went at the weekend, because the queues would be up to 40 minutes for most of the rides. Due to having other activities booked in it was the weekend or nothing for us. I am NOT a fan of waiting for things, but equally I’m not a big fan of paying extra just to get something a bit quicker either, and as an extra 15 euros on top of the normal 35, this seemed a bit pricey to me so I wasn’t keen. Luckily, the font of all knowledge that we ended up booking our excursions through advised that with it being nearly October by this point, the locals were going to be largely done with taking their families on trips and would be saving up for Christmas, so didn’t think we needed to worry about numbers. Turns out he was right – it was definitely busy, but the park is huge and it didn’t impact us, with the longest we had to wait for a ride being around 10 minutes. So definitely worth having a chat with someone in the know rather than just basing your knowledge on Tripadvisor reviews!

Obviously you can’t control how many people are in your party, but if you are an odd number you might want to see if you can make friends with some other visitors! There are plenty of rides for one or two people but a lot of the bigger, scarier rides require 4 for weight distribution. If you’re a three this could mean you have to wait a while for another single person to arrive to go with you. We met plenty of friendly people that were happy to buddy up though so had no problems.

As I said, I ended up being far braver than I expected, only wimping out on one ride (which was essentially what looked like a 50 foot vertical drop so I make no apologies…!). I thoroughly enjoyed almost all of them, but there was one that really freaked me out because it actually was a closed tube that was pitch black inside for a good 70% of the ride! I have a bit of an irrational fear of getting trapped in a small space underwater, so this one did actually almost induce a bit of a panic attack in me! All of the rides do have a handy board at the entrance advising of things like this though, so keep an eye out. They also rate the rides ‘scariness’ with green, amber and red ratings, though it doesn’t help you feel like the grown up you are when your shakily making your way up the steps all full of nerves and there are 5 year olds running past you with glee having already been down once….!!

Shop around for food and drink

Like a lot of attractions like this, you aren’t permitted to take in your own food and drink, which we worried might cost the earth when we got in. As it turned out the prices were pretty reasonable – the vast majority of people flock to the main restaurant and bar on the main pool side, however if you explore a little you will find plenty of quiet, shady little spots to stop for a snack, and most of them offer decent offers for a drink and a sandwich for around 5 euros. Also, technically not food & drink related, but don’t let anyone convince you you desperately need to spend 10 euros on water shoes. These are recommended because the ground can get hot in the sun, and you can’t wear flip flops on the slides for obvious reasons, but honestly? It was pretty hot the day we went, and the only places we were likely to be stood for a while were the queues, which actually tended to be largely in the shade. You have free access to a locker so if you did want flip flops just for walking around you can. Some people prefer them, but they are definitely not a necessity!

Don’t forget to check out the pool!

With all those exciting, white knuckle slides to go on, you could be forgiven for forgetting there is a pool, but don’t! I think the only way I can describe it is breathtaking! It’s absolutely huge, for a start, and the pretty little palmtree covered islands really make you feel as though you are somewhere tropical! It’s also definitely worth hanging around to see the wave machine, which is something else! 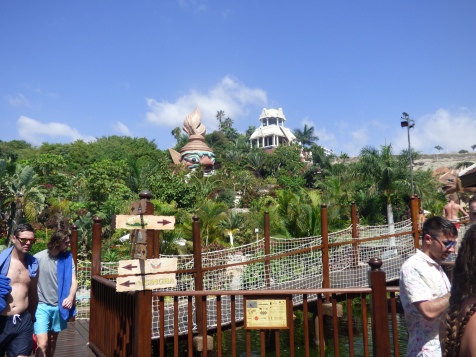 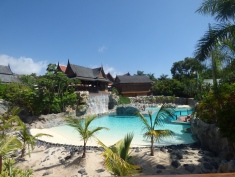 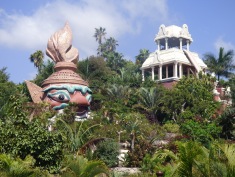 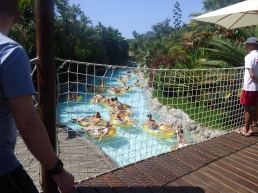 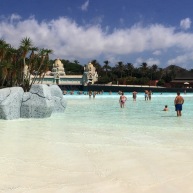 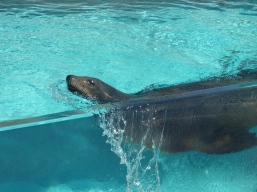 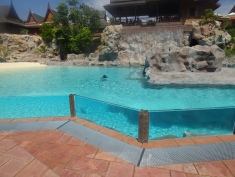 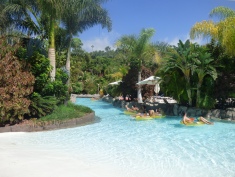 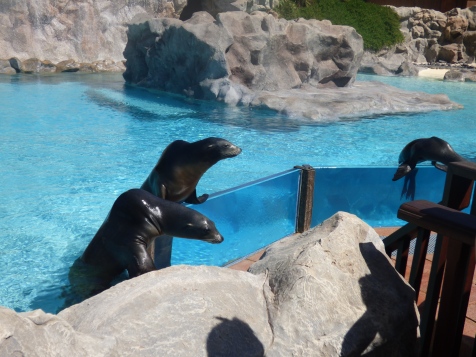 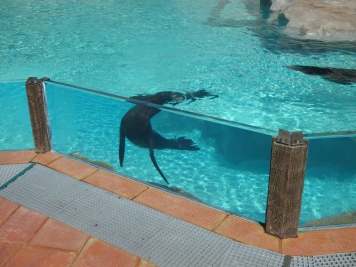 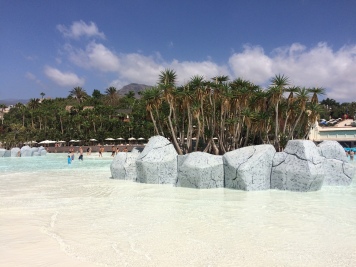 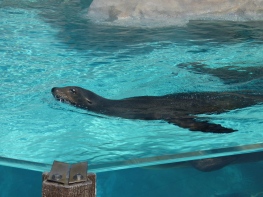 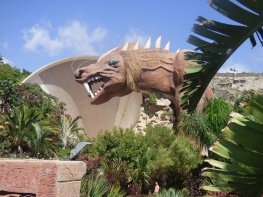 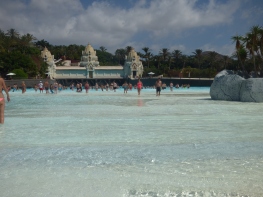 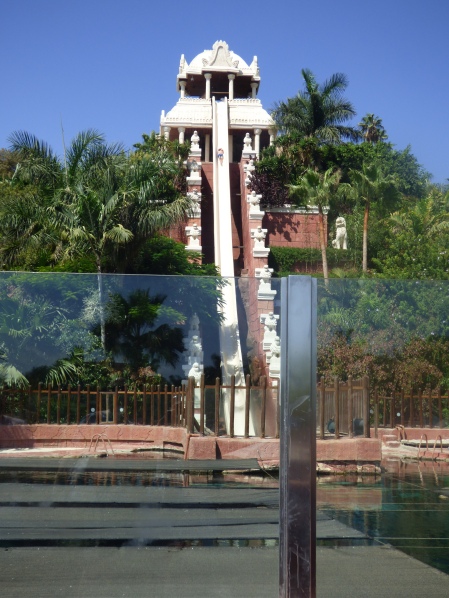 So, now that I’ve discovered my love for waterparks they might become a more regular fixture of our trips! Any recommendations for our next holiday?