I’m not quite sure how this happened, but it is August, and I am due to have a baby… THIS MONTH! There is, of course, a good chance this won’t actually happen as so few babies are actually born on their due dates, but it is a very weird and surreal thought that in the next 4 weeks we will definitely have had our little one! The whole concept of having another tiny human in our lives has seemed so abstract for most of my pregnancy, but it’s really starting to seem real now and is the most exciting and most terrifying anticipation I’ve ever experienced! It also means that after this one you probably only have one more bump-heavy outfit round up! You may well be very happy to hear that, but I for one, despite it’s challenges, have really enjoyed having a bump and the thought makes me a tiny bit sad! So we better get cracking before I start crying, because I always seem to be about 2 minutes away from a weeping sesh these days, damn hormones…

Much like June, July was also a very odd mix of rather schizophrenic weather – record breakingly blistering temperatures one day and critical storm warnings the next! It’s made dressing my bump a little tricky, because even with modern forecasting the state of play each day has been rather unpredictable, and with my body temperature almost always a few degrees shy of the Earth’s core right now, it has made for some rather uncomfortable times. Generally speaking though, I’ve mostly been sticking to my usual uniform of floaty midis, which seem to do the job whatever the weather, though do carry the risk of flashing if a little more on the windy side…: 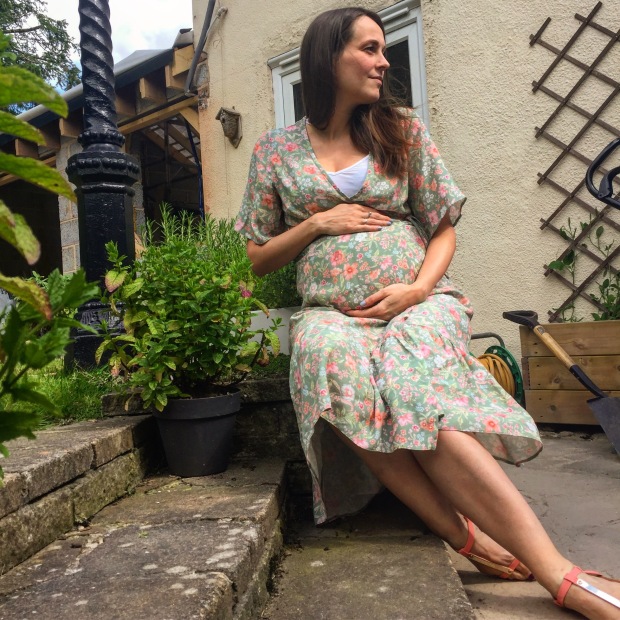 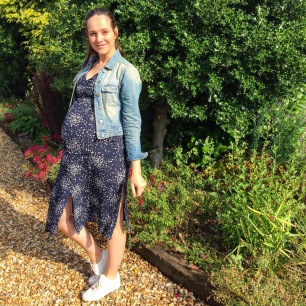 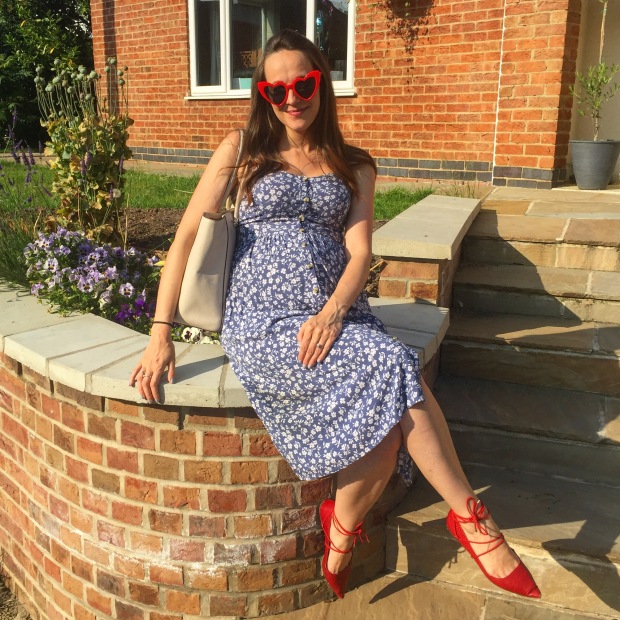 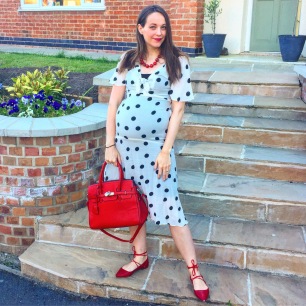 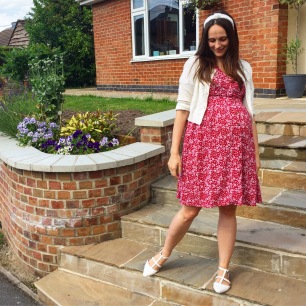 I also had the rare opportunity to get dressed up this month when Dan surprised me with an impromtu meal out at our favourite restaurant. This actually proved tricky, because while a lot of my day to day wardrobe still fits me, ‘going out’ attire tends to be of the cinched waist variety and not conducive to houseing a bump, so coupled with it being the hottest July day on record in the UK, it took a while (and a lot of discarded dresses all over my bedroom floor, much to Dan’s dismay!) to settle on this lovely cold shoulder affair from Oasis! 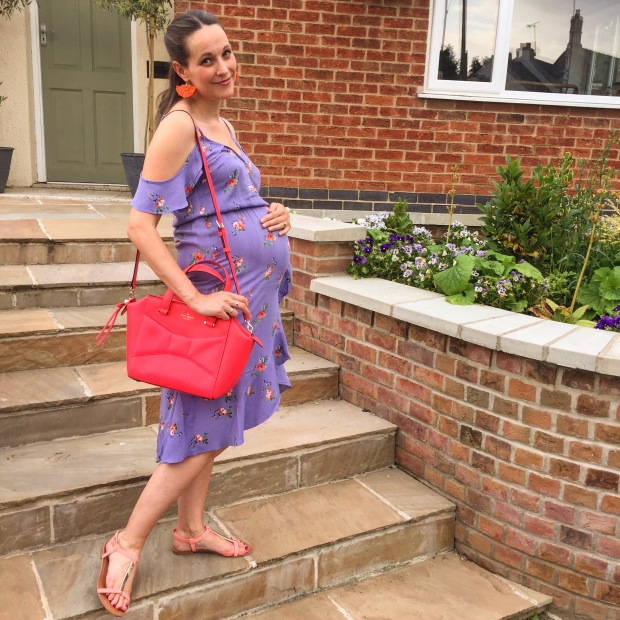 I’ve been blessed with a few extra work from home days this month as my midwife appointments have ramped up, which means casual outfits have also featured pretty frequently, getting me even more wear out of my beloved maternity jeans. My favourite style tip this month came from some of my lovely Instagram followers when I lamented over how my favourite button through frocks were straining at the tum – they suggested I wear one open over jeans or a tube dress, and now I’m hooked! 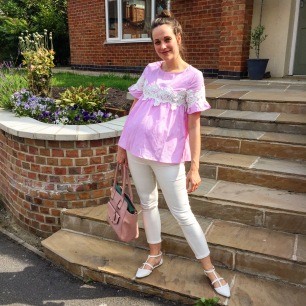 Tube dresses have remained a constant too, because OH THE COMFORT!! Striped seems to have been the order of the day, but have to give a special mention to this navy number I picked up from Primark, which is made of a ribbed fabric which is great for covering the less prominent bumps and bulges! Less of a shout out for the white Zara frock I picked up on eBay, which is gorgeous, but I promptly spilled coffee down the front of the moment I entered a networking event… Why do I think I’m grown up enough to wear white?? 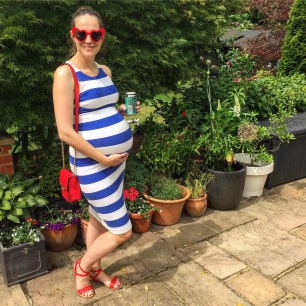 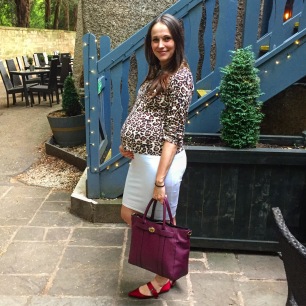 Finally something new though! The scorching week we had mid-July opened up a new challenge for me – staying as cool as possible! As a result, some smock style dresses I picked up from Shein after being impressed with their smock tops last month became absolute heroes! I was also thrilled to find that quite a few of my favourite tea dresses still fit thanks to them being shirred under the bust rather than seamed at the waist, so unfortunately for you, you are now going to be treated with an array of photos of my pasty legs! 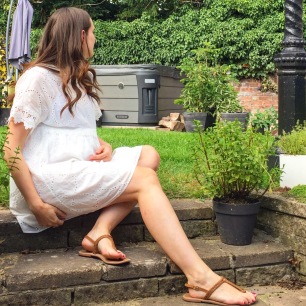 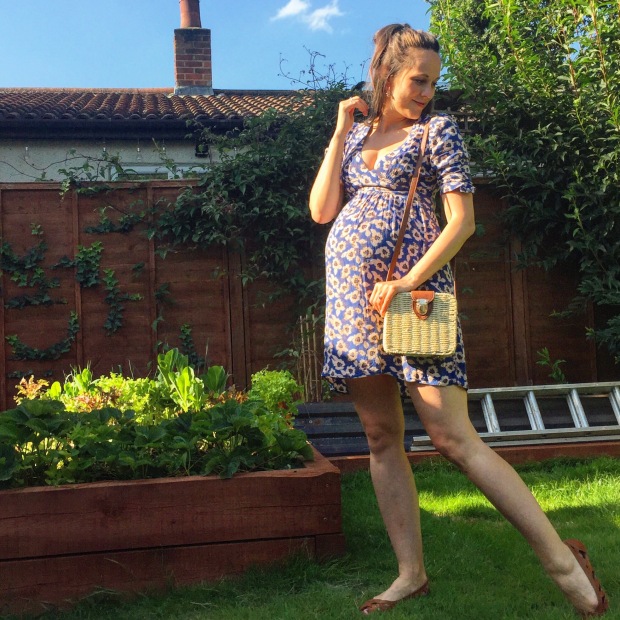 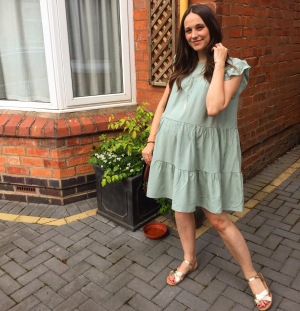 Buy of the Month

I actually bought this back in June but hadn’t had warm enough weather to don it until thankfully the sun came out for a big 4th July party at work! When I first spotted this sundress in New Look I fell head over heels for the bold check print, as it reminded me heavily of a dress I had as a child and induced some crazy strong nostalgia feelings in me! When it was reduced to £11 in the sale I knew I had to get it! I didn’t think it would fit me until after baby came, but happily, it does, and it’s had a few outings when it’s been warm enough! Those bright colours always make me smile and the shape is super flattering (now that I’ve been blessed with preggo boobs, anyhow…) I love it so much that I snapped it up twice more in a white and a mint green broderie anglais version second hand on eBay, and feel you’ll see them form a major part of my Summer wardrobe for years to come!

Outfit of the Month

This outfit was a bit of a departure from the norm for me, in both the styling and the fact that I’ve never been a big wearer of yellow. I kept stopping at this Primark dress though, something about it spoke to my inner hippy and after seeing it on a few of my favourite Instagrammers it became a bit of an obsession. Eventually it popped up in an eBay search with this matching hairband thrown in, and, well, the rest is history. I wore this outfit to attend one of our favourite annual events, a local Jazz, Funk and Soul Festival, and cannot describe how great I felt in it. The sun was shining, the music was great (particularly getting to see The Jacksons!) and people left, right and centre were commenting on my bump and wishing us well. I genuinely felt that whole mother earth glow kinda thing, and I absolutely LOVED it. So despite it not being something I would ordinarily go for, this frock is definitely going to enter the realm of favourites for me now thanks to the memories attached.

And so ends July’s round up! Can’t believe the next one might be the last with the bump! Though I am very much looking forward to reintroducing skirts, trousers and heels, so there is that…. Happy August everyone, hope it treats you well!

4 thoughts on “July Outfit Round Up”