Remember the twirly skirt thing? Well, there is another scenario which calls for a twirly skirt, probably more so than a bad day at work. The dreaded hangover. Weird right? Most people with a hangover retreat back under the covers, and if they do have to venture outside – on an emergency run for a can of Coke and some pickled onion Monster Munch, for instance – they probably don’t even change out of their pyjamas. In fairness, I wouldn’t usually venture outside with a hangover (because of bright light, loud noise and, well, PEOPLE. Plus, no-one really wants to see that, so it’s probably kinder to stay indoors). Hell, I wouldn’t usually venture downstairs with a hangover, never mind to the corner shop in my PJ’s. Yeah. Totes never done that….. Anyway…… Under the duvet would definitely be my location of choice when I’ve got my Gin head on. The morning after a Hen Do last week though, the bloody sun decided to shine, didn’t it?! Thanks a lot sunshine. You know for a fact I have no choice but to haul ass outside when you show your face. So you choose to do it on the one day I’d rather lie in a darkened room. Nice One!

Let’s face it even the worst hangover isn’t going to stop me making the most of an opportunity to wear open toes though, is it? So I did what any respectable ‘blogger’ would do. I manned up. I threw on some big shades and went outside to take photos of myself. Priorities people. Now, the general rule of thumb, as I’ve mentioned before, is that the worse I feel, the dressier I go. Therefore, it is safe for you to assume by these pics that this particular hangover was a humdinger since I decided to walk the dog dressed like an extra from Grease. There were actually sensible reasons for this outfit choice though, other than feeling the need to over compensate. Firstly, I don’t like people to know what a filthy, dirty drunkard I am, so if I dress like Sandra Dee no one will be any the wiser, surely? Secondly, when you would prefer to blend into the background and not be noticed, why not go AS BRIGHT AS POSSIBLE?! Logic, right there. Thirdly – double polka dots. Because one dose just simply isn’t enough. Ever. Even when you can’t actually focus on one dot, never mind a hundred of them. Seriously, that second photo down? The really blurry one of my feet? That’s actually what my vision was like in real life. And in case all of that wasn’t enough justification, massive wedges are widely agreed to be the perfect choice of footwear for hungover dog walking in the park. Especially if you have a dog that’s prone to dive bombing other people’s picnics, or chasing the rare black swans when there is a sign up specifically asking that you don’t let your dog chase the rare black swans . And it’s a park with steep steps at the entrance. And a lake you could possibly fall into (I didn’t. It was close though.) 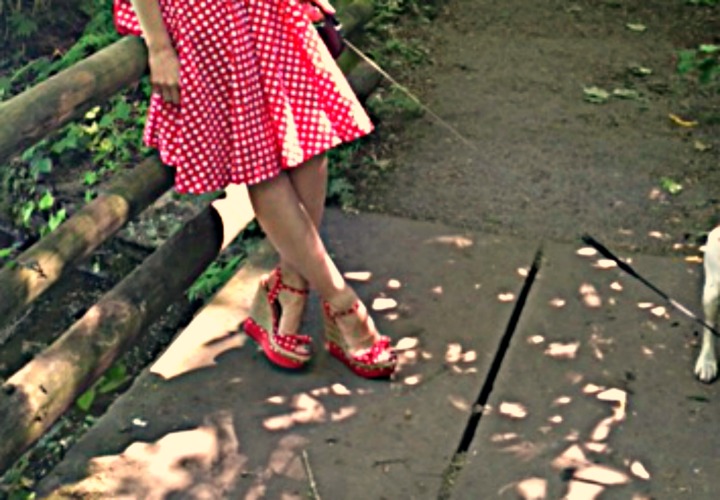 So there you have it. Hangover dressing at it’s best. Join me next time, when I’ll be wearing a ball gown to the garden centre when I have a cold. No, really.