So, apparently scientists have found that having too many clothes and an unorganized wardrobe makes you stupid. Having to spend too much time deciding between a pencil skirt or a circle skirt, and then what top to pair it with and which shoes go best, is just too much for your brain cells to handle. If you give them more than three things to focus on at once on a Monday morning, they will literally self combust and die. It also makes you ‘stressed-out’ and ‘unhappy’.

Well, I guess that explains everything. No wonder I’m so dim. Not only is my wardrobe fit to bust, it is also an unorganized mess. Not only that, but it’s spread across two different rooms. View the evidence…. 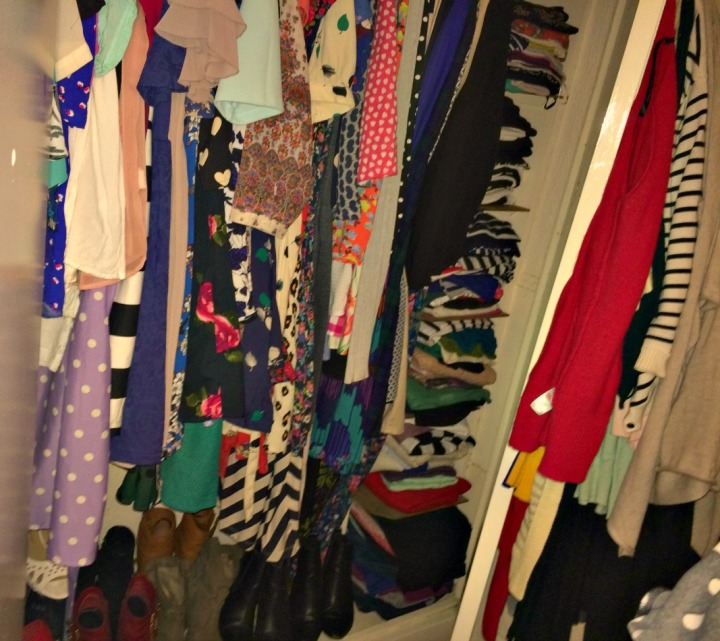 So this probably explains my current position in life. Just think – if my wardrobe had less in it, and if it was set out in a neater manner, I could probably take on the world. Imagine – maybe I’m really a genius? I mean, I’ve done okay so far in life. I haven’t set the world on fire or anything, but I have managed to gain a decent education and forge myself a career. I’ve successfully managed a large number of people for a couple of years now without accidentally killing one of them or running the department into the ground. If only I didn’t have so many clothes, I’d probably be CEO by now! Apparently the answer to this awful predicament is to wear pretty much the same thing every day, a la Steve Jobs, Mark Zuckerberg or Simon Cowell. Give yourself far less options and don’t let ‘inconsequential’ decisions like what to wear waste valuable brain power.

Okay, so I understand the basic logic of this argument – having small but perfectly formed capsule wardrobe would be bound to save you some crucial minutes and energy first thing in the morning. But would it make me less stressed-out or more happy? I think not. As someone who takes genuine pleasure from selecting the right top and shoes to go with the pencil skirt or the circle skirt, I just can’t see this being a huge problem for me. I also find it a little patronising to call someone’s style decisions ‘inconsequential’. No-one is going to argue that the world’s problems could be solved with the right dress, but for many, what you wear directly affects how you feel, and what you feel directly affects how you function. I’m sure there are plenty who would consider this beyond superficial and vapid, but perhaps they aren’t open minded enough to understand that different people have different ways of expressing themselves and feeling comfortable in their own skin, and surely confidence is the number one requirement for achieving your dreams. I am pretty confident that I would probably be equally capable of achieving what I have so far in life if I was forced to wear the same thing every day. But would I be happier? No, I don’t think so. And would I be smarter? Maybe. But I wouldn’t be me.

At least I’ll never kill any brain cells picking out my shoes:

Ikea, me and my brain cells salute you! Now, if there was ever a better excuse to start planning that pristine walk-in wardrobe….