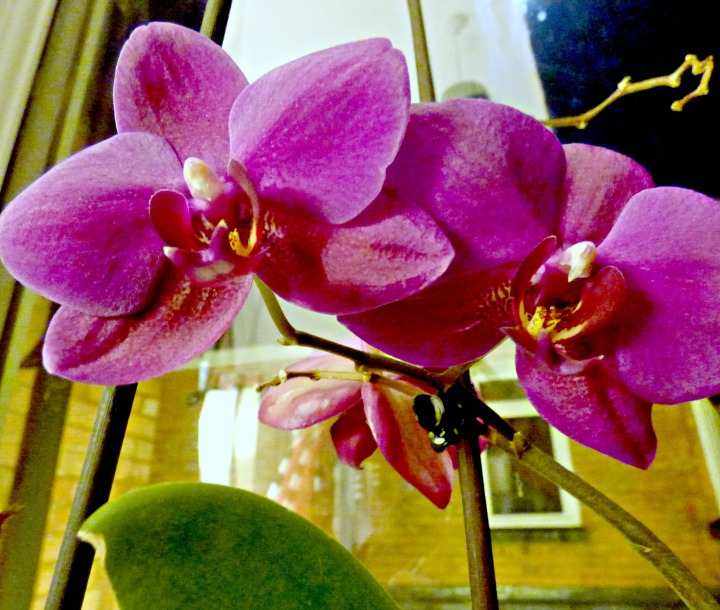 My orchids have sprung into bloom!

That’s probably not very exciting to most people. It makes me a very happy bunny though. See, I’m not particularly green fingered. I really want to be, but I’m just not. It irks me no end, because despite the fact I can be a sarcastic, grumpy old hag at times, I’m actually a pretty maternal and nurturing person. I am….! I AM DAMMIT!! Anyway, you would think that would lend itself to great skills when it comes to plants. Sadly, no. I also come from a family of gardeners, but those particular skills seem to have passed me by. It’s a shame, because I always pictured myself being one of those people who has an immaculate garden, all pretty and floral and perfect for lounging in with a G&T in hand…. but it seems it’s not to be. Unless I marry rich and hire a full time gardener, which could still happen, you never know….! Either way, me and plants really want to go together, but we don’t.

Despite this I’ve managed to gather rather a large selection of orchids. It started with one, which I bought as a treat in Ikea once because I wasn’t allowed to buy some unnecessary cushions (also, because OOOOOOH PRETTY!) and spiralled out of control sometime after a 50% off sale in Homebase. I’d gotten the impression that orchids were tricky to look after, but I got one anyway (because, again, PRETTY) and low and behold, 4 years later they are ALL STILL ALIVE! Not only that, but they grow me new flowers on a pretty regular basis, despite the fact I have a terrible tendency to forget they exist and not water them for weeks on end.

There doesn’t seem to be a pattern to them blooming (some expert is going to tell me there absolutely is now) but it still makes me smile to see them growing new shoots, especially when it’s at such a dreary time as January. It reminds me that Spring is just around the corner and soon everything will be warm and green again. It also reminds me about the metaphorical green shoots growing in my life right now, just the beginnings of something right now, but hopefully something that will grow and last as long as my orchids (um, maybe longer, I probably can’t get away with such neglect for much longer!!)

Soz for the cheesefest just then, I’m not quite sure what came over me. Either way, life feels pretty nice right now. Which feels like a nice thing to be able to say for a change!