Back in October, when I booked this little mini break for Dan’s Birthday, the Lake District wasn’t actually where I thought we’d end up. The plan was for total relaxation, and I didn’t have a specific location in mind, but then I found myself this sweet deal on the Devon coast and was sold – I was picturing lazy days in the spa, long walks on the beach and delicious seafood dinners. It was all looking pretty idyllic in my head! But then when I called up to book the hotel it all started going a little wrong. They didn’t want to honour the deal I’d seen (for reasons I’m still not clear on!) and what they were offering in it’s place just wasn’t the same. So I had to scrap my plans and go back to the drawing board, which isn’t ideal when you’re working to a deadline! It was during an ensuing frantic late night internet search for hotels with private hot tubs that I stumbled across The Burnside Hotel & Spa in Bowness, and heck, it just looked so darn nice I near enough booked on the spot!

Luckily we weren’t disappointed! We arrived late afternoon on a dreary January afternoon, but we received a more than warm welcome. After checking in, a wonderfully friendly and enthusiastic concierge showed us to our room – one he was very excited to show us – and gave us a little run down of the local area. He was right to be excited – the room was just lovely, and possibly one of the most stylishly decorated I’ve been lucky enough to stay in! Of course, the piece de resistance was the hot tub, standing out on our balcony with stunning views across to the nearby Lake Windermere. We arrived just in time to see the sun setting, and then of course our minds were purely focused on getting in that tub! After a long, luxurious soak we were feeling a little peckish, so headed off to see what food we could find. There is a restaurant there which looked lovely, but we were feeling lazy (also, I had hot tub hair…) so we opted instead to have a meal in the cosy little pub that’s also on site. We’d arrived a little too late to catch the daily movie in their cinema room (yes, really!) but were happy to settle in with some food and a drink from their rather impressive gin selection, while admiring the pooches that dropped in to visit – Bonnie wasn’t with us this time, but it was nice to know we can come and stay again with her in tow as the hotel is very doggy friendly! The pub is also the home of the spa, so we had a chance to sneak a peek at the stunning pool area. As I mentioned in my monthly round up, we never got around to using it, but you should definitely check out the pictures on the website! All that relaxing was extremely tiring though, so once we’d eaten we took ourselves off to bed (after another little pre-bedtime soak in the tub, of course!) 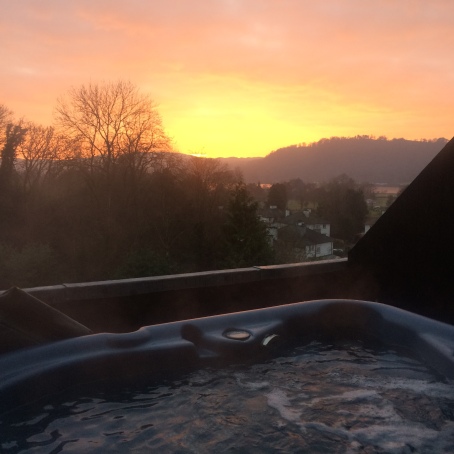 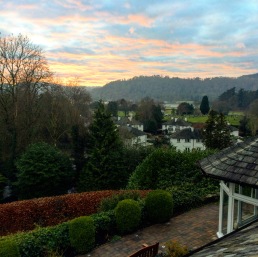 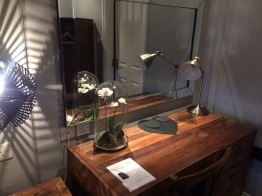 The next day, after a rather delicious brekkie – seriously, an extremely generous offering of hot and continental options, including all the pastries and fresh fruit you can eat – we decided we probably should venture outside for a bit so took the short stroll into Bowness to see what we could find. Bowness is a charming little village right on the edge of Lake Windermere. We headed straight for the shore when we got there as I’m attracted to water like a bee to honey somehow – must be because I was born to next to the sea! The views out across the lake were just stunning! The village itself was pretty bustling, but stood on a jetty looking out over the still waters was an incredibly serene experience – I felt as though we were the only people in the world and could happily have stayed there for hours if it wasn’t so damn cold! After a short while gazing we decided to warm up by having a little explore of the pretty cobbled streets, full of colourful buildings and strung with fairy lights. There is a lovely collection of shops – especially those offering locally made chocolate and treats – and independent cafes, restaurants and pubs, a few of which we made a mental note to pop back and visit that night! We decided to take the half an hour walk into Windermere, which was much smaller than we were expecting, but similarly pretty and littered with sweet little gift shops, and found ourselves a yummy spot of lunch in Sugar & Spice Bistro, where the lovely staff were more than happy to accomodate our random requests to chop and change the menu! 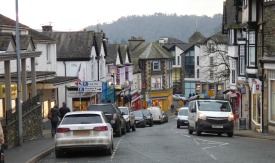 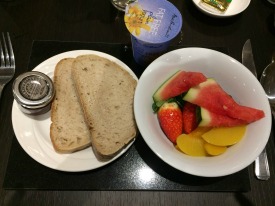 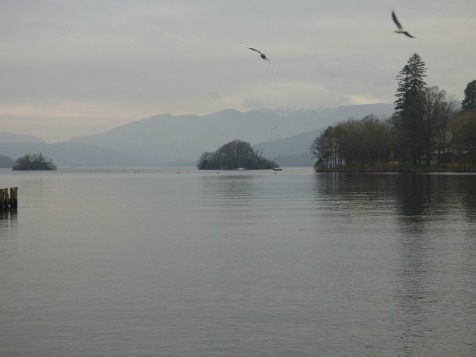 Obviously, after a hard days exploring and hunting out gifts for the family, we had to have another soak in the hot tub… After that though, we decided to head back out to Bowness to get some dinner. Our first choice, The Flying Pig, was unfortunately having some refurbishments done on their kitchen, so we settled on some tapas at Bodega. Here the atmosphere was buzzing, the service was excellent and we absolutely gorged ourselves on delicious dishes, all washed down with a local Hawkshead Brewery Larger. Afterwards we had a little stroll over to The Flying Pig to snuggle up in front of their open fire and sip more local tiples, this time a delicious elderflower gin by The Lakes Distillery. 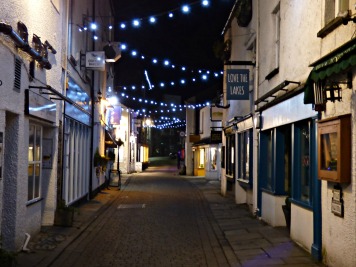 Sadly we had to check out the next day (after another slap up brekkie of course, had to get me some more of those pastries!) but we weren’t quite done with the lakes! We have a business, The White Lion, over in Ambleside on the other side of the lake so we decided to head there for lunch before the drive home. Ambleside is a stunning place, all stone and slate buildings and winding little streets, with majestic hills towering over. We wandered down to the lake’s edge again (of course, because I made Dan do these annoying things all the time) to get some photos, and then wandered the streets, admiring the vast amounts of dogs – Ambleside is definitely the most dog friendly place I’ve ever been, with even the major branded stores allowing them in – and wishing we had the pup in tow. 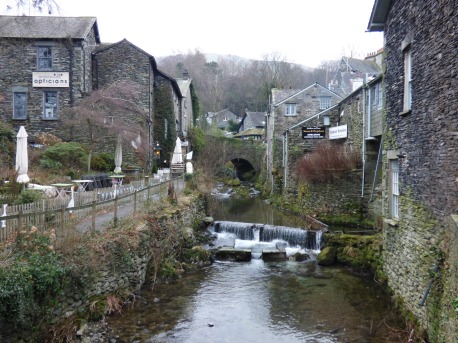 All too soon it was time to head home to see our own doggy, but not before making plans to visit the Lakes again soon! We will most definitely be back!