Strange but true – in my 35 years on the planet, until very recently, I had never really bought a sofa. Not a proper one anyway. Until my 20’s everywhere I rented was already furnished, bar the house I spent a year in with some friends from work – we couldn’t afford one so we had giant bean bags instead!! When I moved to France we were conscious we wouldn’t be there forever so we made do with those horribly hard £70 ones from Ikea so we could leave them there and be done with it! When we came back, we did buy a sofa of sorts, but not one I’d class as a ‘proper’ sofa. We’d just moved into a new flat with a huge living room and ended up buying a giant monstrosity, again from Ikea, that then wouldn’t fit properly into any new place we moved to and sagged so badly after a year that I frequently lost the dog underneath the cushions! I didn’t even want it, but my ex didn’t want to have to wait for delivery, and I only just managed to get rid of the damn thing last month after paying for it to live in storage for the last 2 years!! (This post is now starting to sound like a tirade against Ikea – it isn’t I promise, I love Ikea! Just not those damn sofas of mine!)

Fast forward a few years and Dan and I have now set up home together. It can be a little odd, moving in with someone in your 30’s. Both of you have already lived lives with others and accumulated a mish mash of belongings that can be hard to merge together, so you will most likely find yourself wanting to throw everything out and start again. Obviously that isn’t practical, particularly if you have just bought a house and have extensive remodelling plans! So we decided to prioritise, and wanted to start with a new sofa.

We must have looked at 100 sofas. After a while they all started to look the same to me – we were looking for a pretty standard combination of a reclining three seater and a two seater, made from leather and preferably in a dark colour, and found plenty of things fitting those requirements. After a while they all started to look the same to me, if I’m honest, but we soon found that not all sofas were created equal, because one day we sat on one that changed everything. Honestly, it was like sinking into a cloud, and immediately we knew it was the one – but as with all things it came at a price – and a very hefty price at that. We decided to ponder on it, but ultimately we weren’t sure we should spend that much money until we knew what the costs of the renovations were likely to be (especially when we also had a rather costly hot tub on our wish list!!).

Dan, it seems, was a little less prepared to give up on said sofa though, because after a couple of months of eBay and Gumtree trawling he found a couple of ex display models for just £900 for both! Right up until they were delivered a couple of weeks ago I was expecting it to turn out to be far too good to be true, but they arrived blemish free and every bit as comfortable as we remembered! It’s definitely a sign you’re getting old when a new sofa excites you more than anything else, but I can honestly say I’m over the moon with it! I actually look forward to going home just so that I can sit on it! 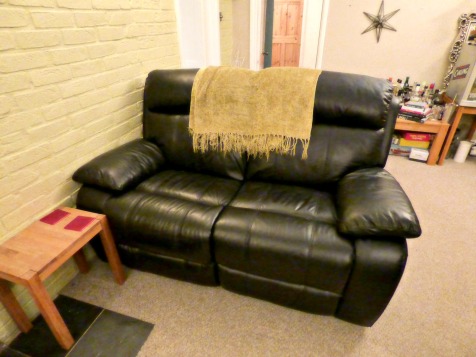 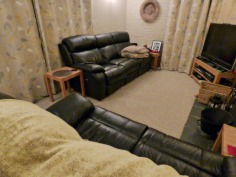 The best part is that it feels really lovely to have purchased something that is ‘ours’ rather than mine or his. It feels like the first proper step on the road to building a home together and I can’t wait to get cracking with the rest now!

3 thoughts on “Reasons to be Cheerful – Grown Up Treats”