Ah shopping. A favourite pastime of mine, for sure. There is little more pleasing to me than skipping home with a bag containing something I’ve been yearning for for quite some time and finally purchased with my hard earned cash. These days though, that isn’t often quite how it turns out. In my youth, a shopping trip was something that took planning. It was normally a day long activity, if not, at least an afternoon, and it was more than just a functional errand – it was a social experience.

I’m obviously showing my age now, but shopping isn’t quite the same anymore. I can still go and shop on the High Street, of course, but these days there is such an overwhelming choice online that it’s just far too easy to ‘accidentally’ buy yourself a new wardrobe while popping online to pay the gas bill or watch the latest episode of Fear The Walking Dead. On the one hand this is the stuff that dreams were made of to my 15 year old self, who prided herself on getting a ridiculous bargain. On the other, it means it is very easy to spend far more money than you planned to, and it’s incredibly hard to know who is a trusted, genuine store with all that choice out there. So once again, I decided to take one for the team and check out one of those sites that seems to be constantly begging for your attention, Shein. I bought some stuff to see if it’s decent or not, so that you don’t have to. I know. You can thank me later….

The concept of this site is nothing new. It’s a China based site with a crazy amount of varied stock which relies heavily on bloggers and affiliate programmes to promote its products. In short, it’s one of those ‘can this be too good to be true’ type sites that seems to offer an unbelievable amount of stuff for crazy cheap prices. But is it possible to sell decent items for such low prices? We’ll see…. 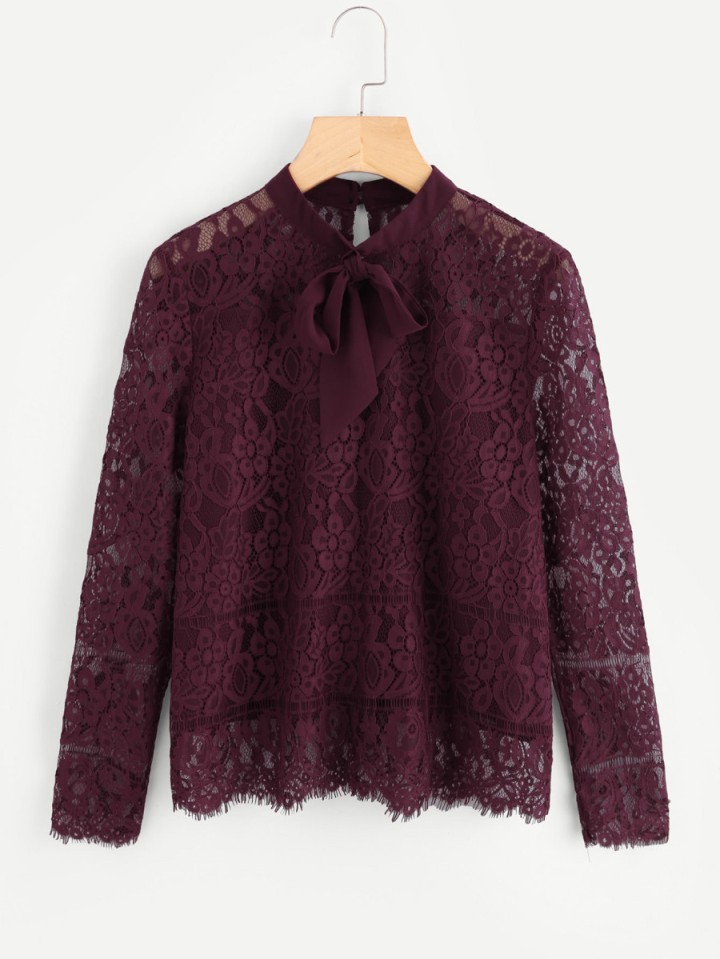 My search for some dressy tops is well documented. Kids these days just don’t dress up any more, and as much as I’m not a sheep, it’s nice to have some options for nights down the pub that don’t leave you feeling like you turned up on the wrong night for prom (which is a regular occurrence for me, truth be told…) This lace blouse was just what I was looking for – something that looks smart but can be dressed down with the right accessories. The colour is one that features heavily in my wardrobe so would be easy to mix in with my existing items, and the long sleeves were an added bonus as most of my evening tops are a little on the flimsy side. 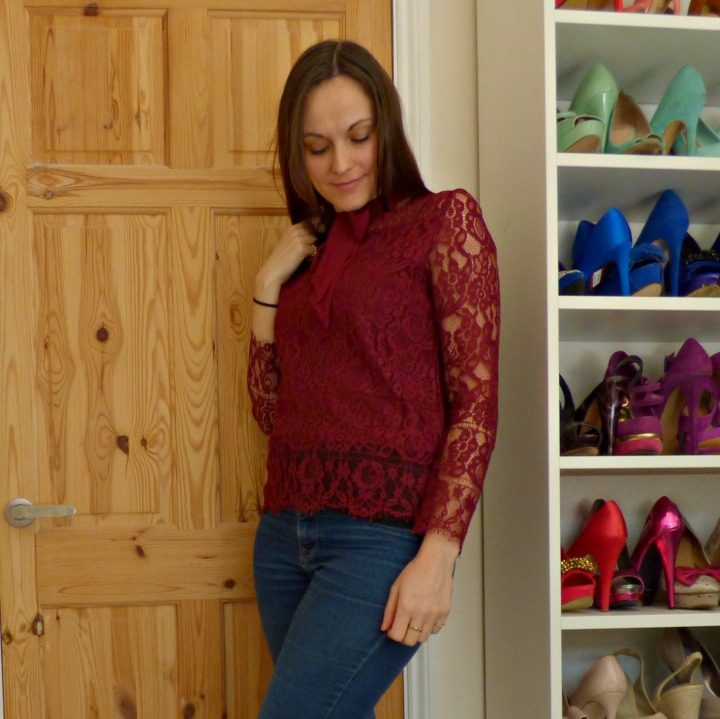 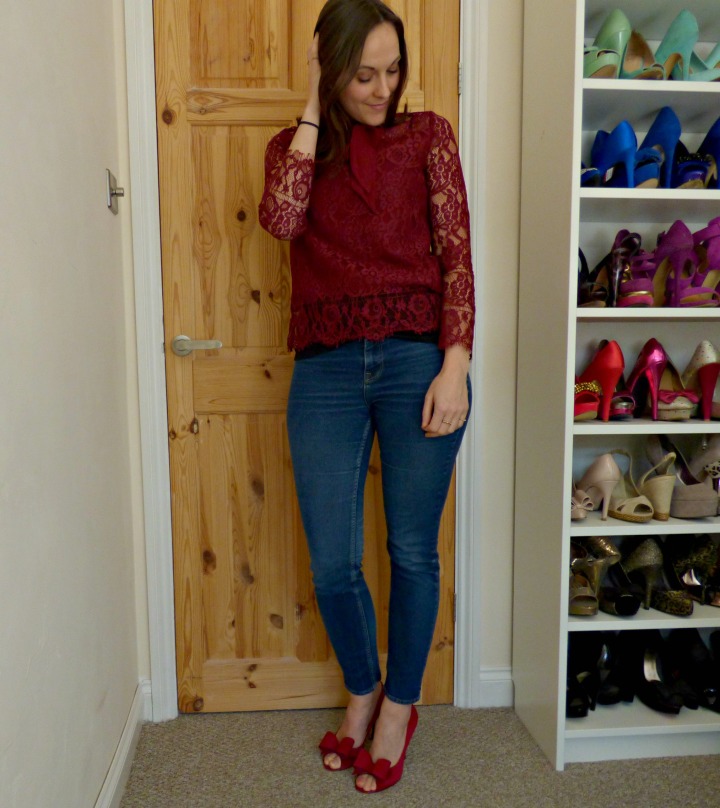 While it isn’t the best top I’ve ever owned, I’m pretty happy. The lace is nicely soft and not scratchy like you’d expect a cheap lace to be, and the bow detail at the neck is a nice touch. I wish it was a touch looser and longer so I’d get a bit more wear, but it’s ideal for tucking into my high waisted trousers and pencil skirts, so it isn’t at all wasted on me. 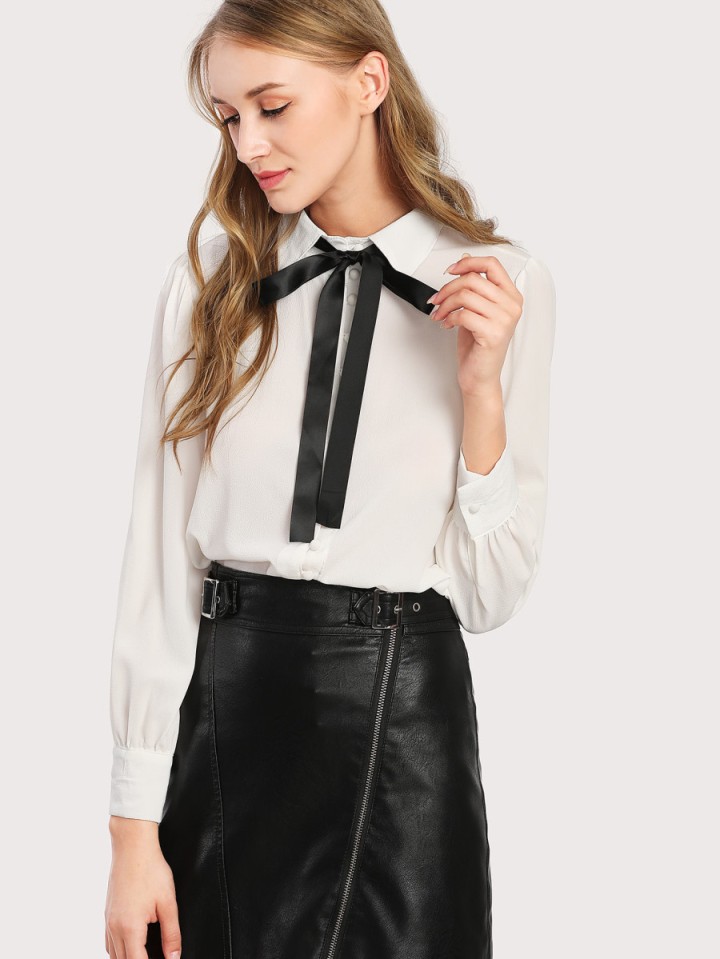 For quite some time now I’ve been after a white or cream blouse with a black ribbon tie at the neck. Don’t ask me where this rather specific set of requirements came from, but it’s been in my brain for a while with no sign of shifting. There were more than a few items meeting this description on the site, but in the end I chose this one thanks to the slight volume at the ends of the sleeves, and the fabric covered buttons, which are always a plus in my book. 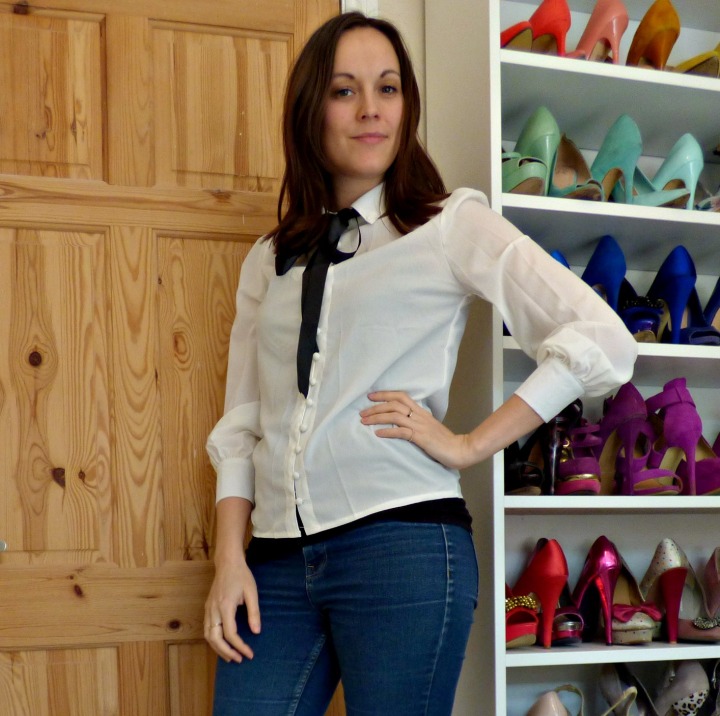 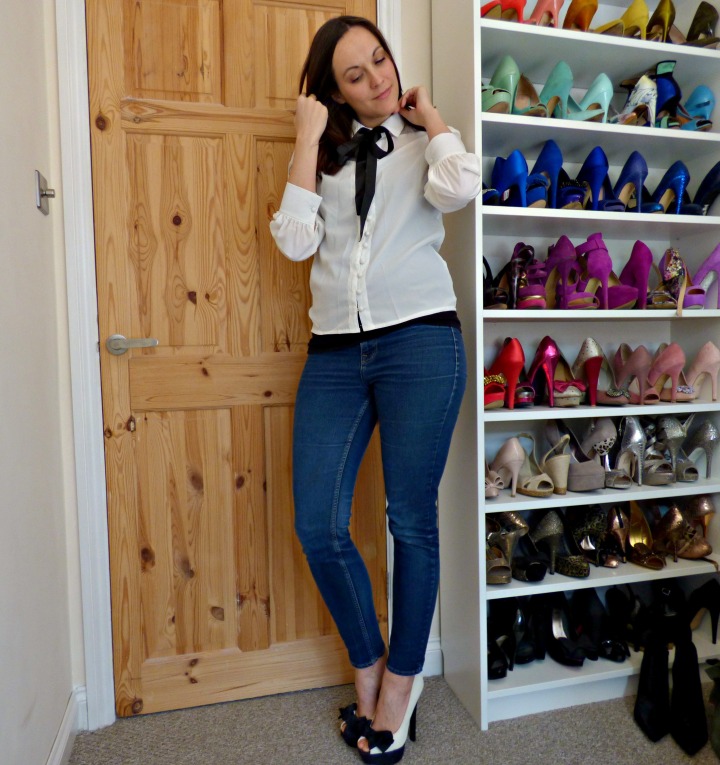 It’s okay. The fabric is a little stiffer than I had in mind, but nothing out of the ordinary quality wise compared to a normal high street purchase. I was a little alarmed at first at the sheer number of buttons, thinking it would take an age to get on and off, but thankfully the button loops are made of elastic so that isn’t a problem. I like that the neck ribbon is actually not attached to the garment, so you can use it or not depending on your mood. It is slightly slim fitting at the hips again though, and a little on the short side, so again will probably only be worn in ‘tucked in’ scenarios. 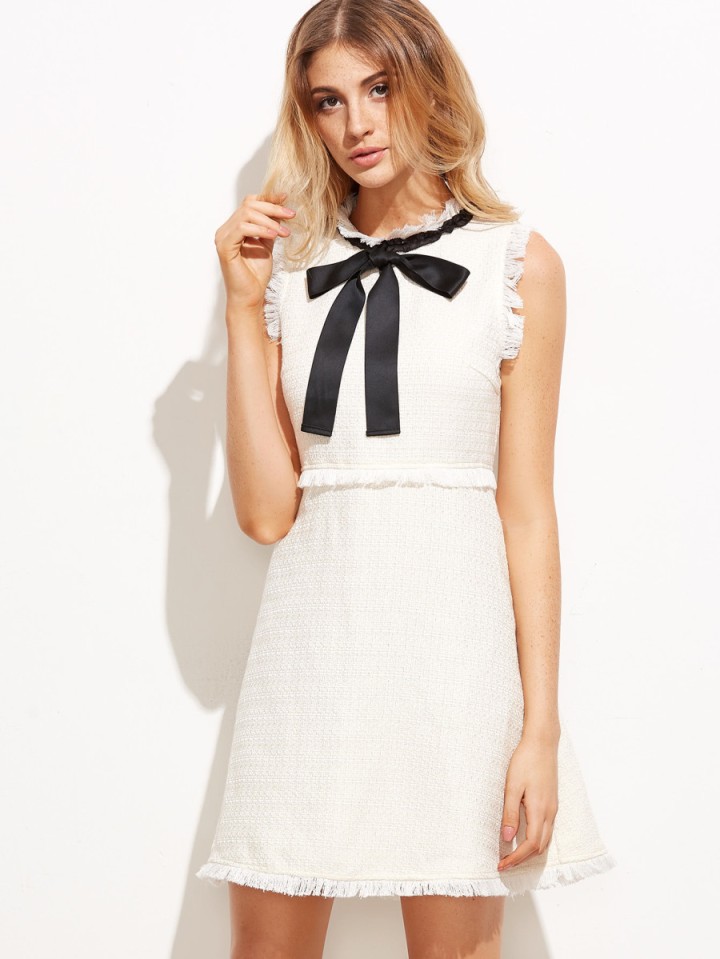 I’ve seen this frock on a few bloggers now and always been enamoured. I love the bow at the neck (quelle surprise…) and there is something about the preppy style that just really appeals to me. I had to give it a go. 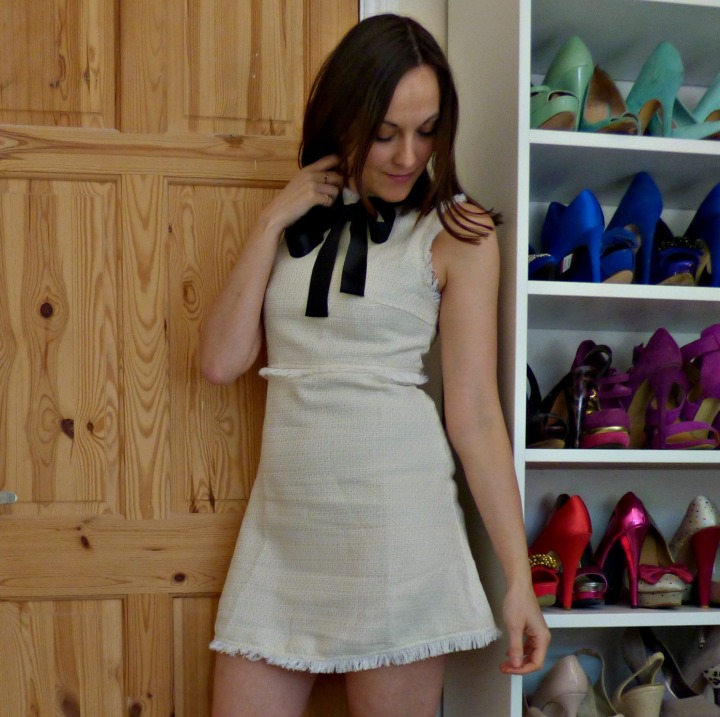 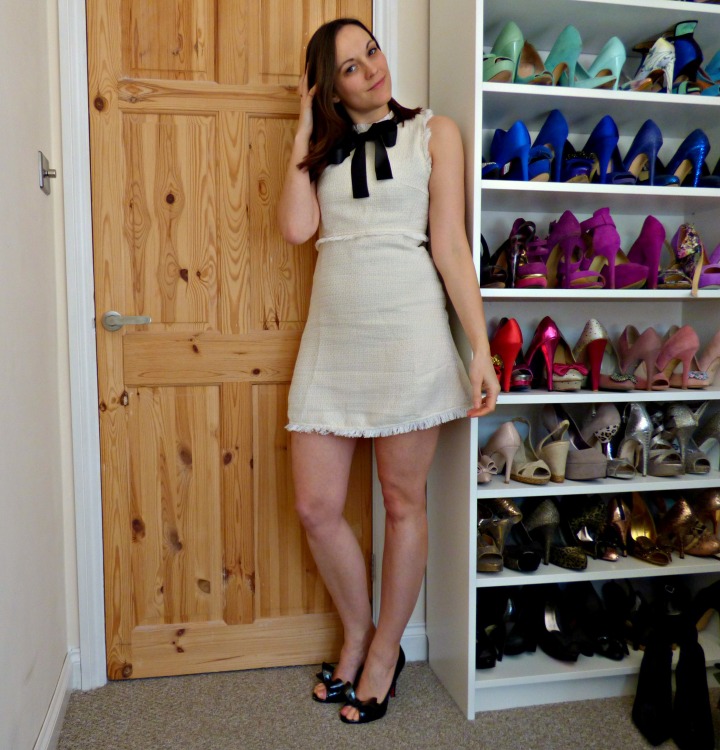 Well, obviously it isn’t actually tweed, but I think we all knew that, right? It is a pleasingly heavy fabric though that is far better than I was expecting, and I’m very much taken with it. I was expecting it be obscenely short as mini dresses from these sites often are, but it’s a perfect length, and I love the unfinished, frayed edges. I won’t actually ever style it the way I have here, as the heavy fabric is very much at conflict with how much flesh would be on display. No, it will be a winter dress for me, worn layered over a sweater with thick tights and boots, but it will most definitely be worn. This one was definitely a win. 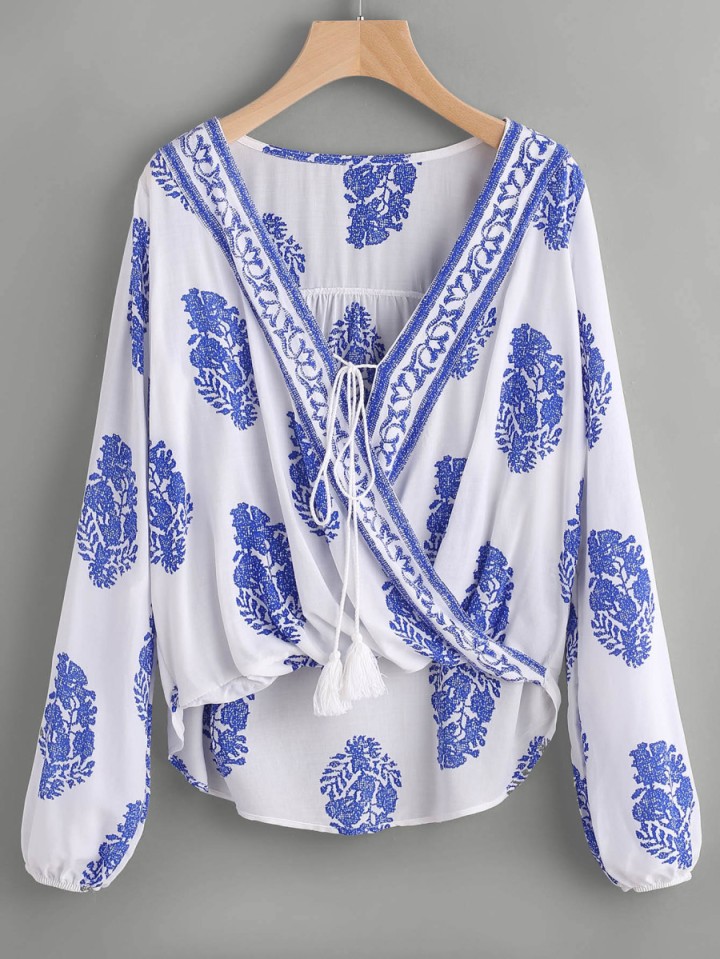 With my upcoming trip to Morocco I’ve been looking for some loose, airy garments that cover up a little more skin than the usual holiday attire, and as soon as I saw it I knew this was just the thing. I love the blue and white print and the tassel ties, which already remind me of warmer climes, but the flowy, wrap shape looked super flattering while still demure – just the ticket. 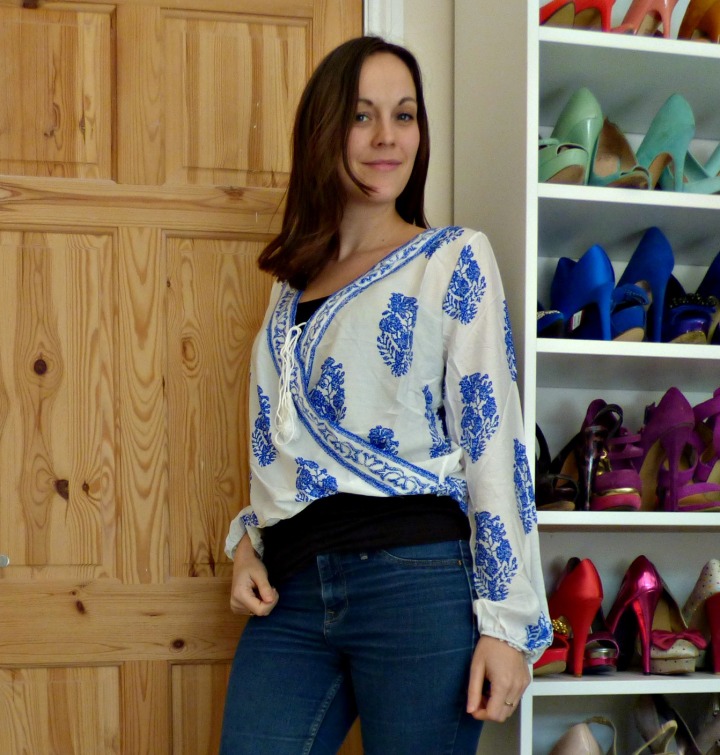 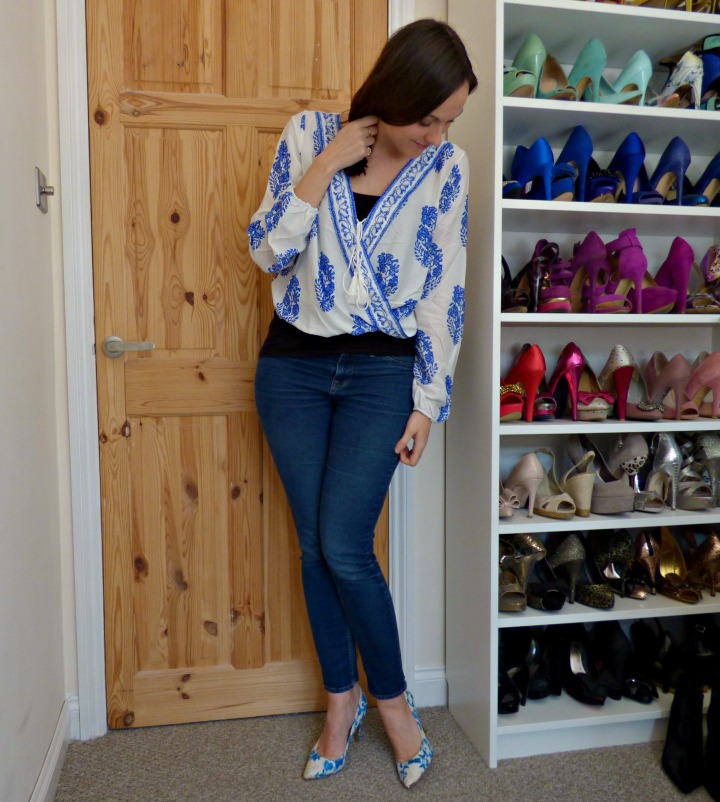 I FREAKING LOVE THIS BLOUSE!! I cannot tell you how pleased I was with this. It is exactly as it appears in the photos and is made from a soft, silky fabric that feels lovely and cool against the skin. Ten out of ten for this one – I’ve already worn it several times and I’m not even packed for holiday yet!

So – the truth? You really can get some great items from this site for very little money. I was very pleasantly surprised how quickly my order arrived compared to most Chinese sellers, and for what I spent I’m very happy with what I received. HOWEVER…. This site can be dangerous. There is just so much stuff, and no consistency to sizing or shape (please pay close attention to the measurements and the reviews – they are vital to making a good choice) that it could be very easy to get carried away and buy things that you either didn’t really need or weren’t quite what you were expecting. As much as I love a good bargain, I’m going to steer clear unless I have a specific need that I can’t get elsewhere – I think for now I’d prefer to get my fashion a little closer to home so that I’m not sucked in to spending too frivolously.

What are your thoughts and experiences?

The final bump shot. I can’t believe less than a week ago my two babes were still inside there. We took this the night before my section and I’d spent most of the day in tears that my pregnancy was over. It’s been really tough, especially at the end, and I was physically spent, but in no way emotionally ready - I cant even begin to describe just how much I’m going to miss feeling them wriggle inside me. I feel so privileged that I got to experience this miracle twice, so thankful for this body that grew and housed my beautiful children and delivered them to me safely. I will never stop being in awe of how incredible our bodies are ❤️
So - here they are! Finally we are home with our gorgeous baby boys, reunited with thier darling brother Bailey and doggy Bonnie and have had time to get to know them properly to give them names! We’d like to formally introduce Taylor Lenny (left) and Jesse Cooper! Bonnie has been an angel so far, Bailey’s thoughts on the matter are a little more complex but he’s been very sweet, giving them kisses and offering them his cars. We are so happy to be home as a family of 5 (plus dog!) It feels a bit like a beautiful dream 🥰
They’re here…!! Our two new baby boys were delivered safely on Friday morning via c-section. We’re doing well, still in the hospital having treatment for a touch of jaundice but hoping to be reunited with our darling Bailey at home very soon. I will introduce you properly in due course, but just wanted to let you know we’re all fine. Thank you so much for all the lovely messages asking after us, I’ll get back to you all soon once we’re settled. Lots of love in this room right now 🥰
Right, I’m about to do that really Insta-wankery thing of making a big announcement as I leave the room like I’m Elvis or something 😂 The big day is looming ever closer so I’m signing out for a short while to get mentally prepared and spend some quality time with my boys. I know if and when I stop posting people will wonder and I didn’t want anyone to worry. I’ll be around in the background, just not actively posting (I’m pretty much going to be in comfies from here on in anyway so won’t have much to post in the way of interesting outfit photos!) have a lovely week or two, and hopefully I’ll have some exciting news for you soon! Over and out!
We’ve had a lovely day today. The twins are due to arrive around Dan’s birthday so we decided to do some celebrating this weekend. Started the day with pressies, then a lovely long dog walk in the sunshine (I actually hit 10000 steps for the first time in ages today which I didn’t think was even possible!) and a fun afternoon with friends. Feels very surreal to think days like this as a family of three are nearly over!
Think Bailey is going to miss his cuddle seat 🥰
Loading Comments...
%d bloggers like this: