When we first got the hot tub, I obviously knew I was going to enjoy it. I mean, it’s a hot tub. Come on. We had originally had concerns that maybe we wouldn’t use it as much as we thought we would, and some people do seem to have a bit of a snooty perception of people with hot tubs, as though we’re suddenly a pair of flash, sleazy swingers or something! But it’s still a hot tub – it goes without saying that being able to jump in the tub with a glass of fizz any time I want was obviously always going to be a bit of a treat. But I’m still not quite sure I realised just how much I was going to love it until it was here!

We’re using the tub far more than expected, so far. We always knew it was going to be the ideal thing for entertaining and parties, but it’s become a pretty regular evening activity now, jumping in the tub for a bit of a relax, and if I was at home all week instead of away for half of it, I’m pretty sure I’d be in it a fair amount mid week too! We’ve even found it a great way of keeping the kids of our friends and family all smiles when they’re here which is an added bonus we didn’t envisage! I’m not sure it’s makers imagined it with ‘The Wheels On The Bus’ blasting out of the speakers, but hey, it made a certain little boy very happy indeed! But the most surprising thing has been the lifeline it’s offering me right now when things are getting on top of me.

My return to work last week was pretty brutal. Going back after a holiday is never easy, but with the team low in numbers at the busiest time of the year and a whole load of new legislation landed on us in the time I was away, it was one hell of a crash back down to earth. My job is emotive at the best of times, but one of the hardest parts is that we bear the brunt of an awful lot of people’s frustrations, and they aren’t always particularly polite about it no matter how far out of our control their problem is. We had one such person cause a bit of upset in the team last thing on Friday. Normally I’d spend all weekend stressing about having to deal with it on Monday, but to my surprise, the thought that within an hour or two I’d be climbing into that tub with a G&T just made it so much easier to deal with. And lying there with the jets on, watching the sun go down and listening to the birds singing while I sipped on my favourite tipple, I was too relaxed to even think about it, let alone worry. Only problem was, I was so desperate to get in there I couldn’t be bothered to eat first! Luckily I had a lovely boy on hand to bring me some pizza!

Worth every penny (the hot tub, not the boy!! I’m pretty sure he’s here for free!) 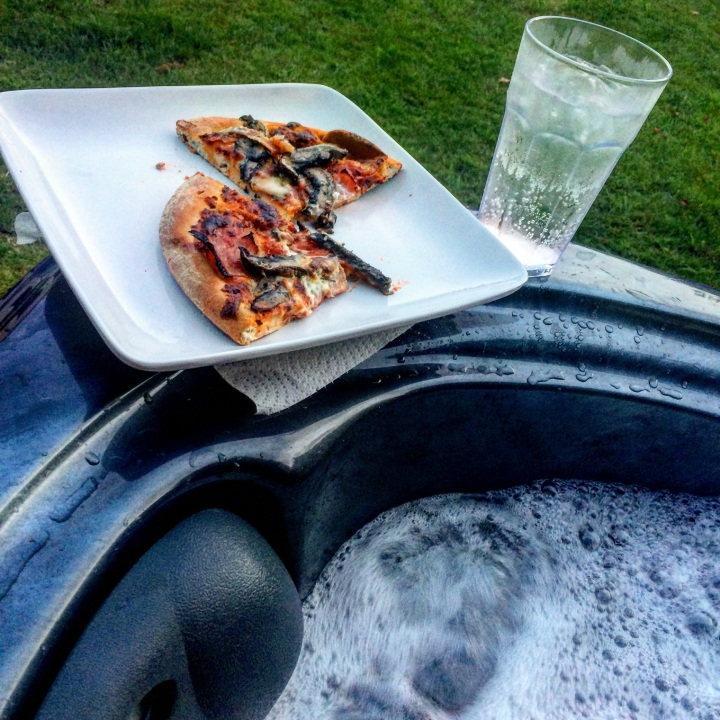 Happy Monday everyone, here’s to a hopefully hassle free week!