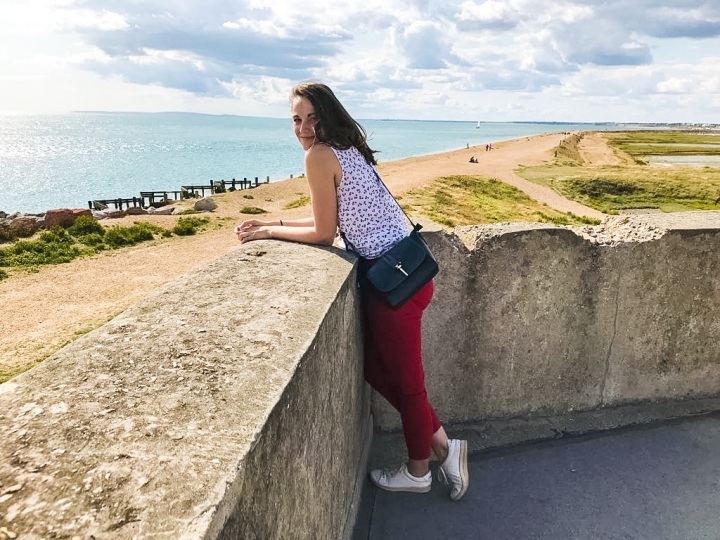 In case you hadn’t noticed from yesterday’s post, I am more than a little alarmed that we have reached September already. It feels a little odd to say ‘already’ like that, because on the one hand this gorgeous weather we’ve been having sometimes makes it feel as though this Summer has stretched out endlessly, I can barely remember how it feels to need to wear a coat. But on the other hand, the seemingly sudden arrival of Autumn has made me very aware of how quickly the nights will be drawing in, the cold weather will be upon us and before we know it the year will be over. My mood doesn’t fare well in Winter. The greyness, the darkness, the constant gloom – it all weighs a little heavily on me and I find it so much harder to motivate myself to do much of anything, so I’m not looking forward at all to the end of Summer, especially as it’s been such a good one. BUT, it isn’t over just yet! And this post isn’t about September and it’s dreariness, it’s about lovely, sunny August, so without further ado….

Would you believe that the crazily warm and beautiful weather we’ve been having persisted even through August? True, the temperatures dipped somewhat and we’ve had a little rain. The sun has been setting far earlier these days and the mornings have brought with them heavy dew on the lawn and a distinct chill in the air, but all the same, the ratio of sunny days to drizzly days has definitely been favourable. Unfortunately we’ve been very busy working on fitting and decorating our kitchen this month so we haven’t been able to spend quite as much time outdoors as we’d like to have! Still, it’s really taking shape now, and it’s really starting to make the place feel like ours. I won’t share any pictures just yet because I’m planning a few posts all about our house transformation, but if you follow me on Instagram you may have caught a few stories all about it!

Despite being so busy with hard labour, we’ve managed to get a whole two date nights out together which is pretty impressive going for us! The first, at the start of the month, was a trip out to the cinema to watch the new Mission Impossible movie (which is entertaining enough and very Mission Impossibley if you’re into that kind of thing – I’m not that big a fan because I pretty much hate Tom Cruise in anything unless it’s a comedy, at which point I find him strangely brilliant…) and eat our body weight in pasta thanks to some Tesco Club Card vouchers for Bella Italia! I used the opportunity to completely overdress for the occasion, of course, except we were in too much of a rush to take proper outfit photos so I had to pose for a horrifically awkward set of photos in front of the pick n mix! The next fell later in the month and was more to do with the fact we had no kitchen to cook in than anything else, but we happily used the excuse to use our staff discount at one of our favourite Miller & Carter steakhouses, drink some gin cocktails and I got to wear heels so it was a win win all round! 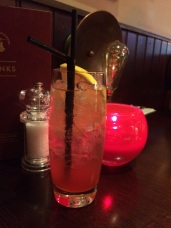 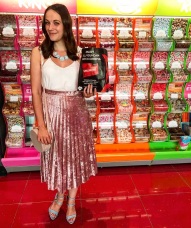 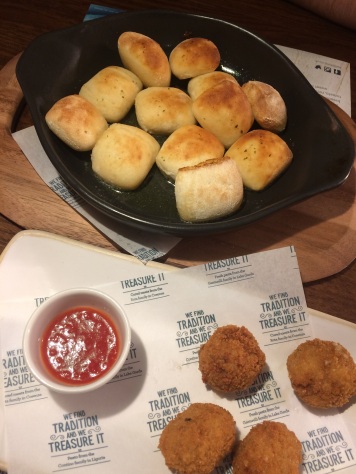 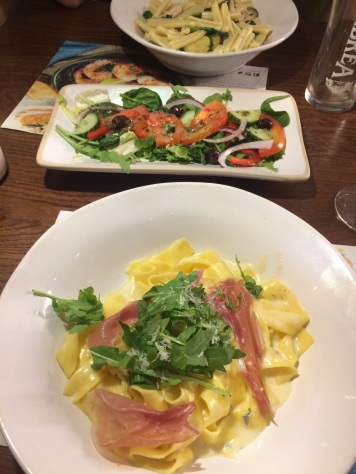 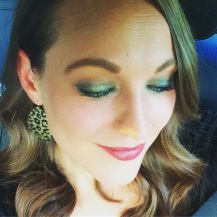 We also got to spend a lovely few weekends with friends which always makes a great month! One such weekend our friends from Birmingham brought the kids up for the day and we spent a lovely afternoon catching up at our local pub, where I ate the most delicious Mexican Chicken burger – a chicken breast coated in crushed up nachos and topped with salsa and sour cream, absolute heaven! I tried to work it off with a session on the bouncy castle, but it didn’t go well. Do you remember it being such hard work?? Because I definitely didn’t! After a few disastrous attempts at ‘cute’ action photos, we gave up and went home to chill in the hot tub for a little while! The other was last Bank Holiday, when we headed down south to visit our Friends in Southampton. It turned out to be a bit of a rainy weekend, but we managed to get one beautifully sunny, if a little windy, day out down to Milford on Sea where we had a lovely lunch overlooking The Needles at the Isle of Wight, before spending the afternoon exploring Hurst Castle which was fascinating, and really captured the imagination of their 3 year old boy who spent the rest of the weekend asking to know how canons worked! I think we know how we’ll be sending our next day together! The next day it rained all day, so we had a cosy day baking crumble with all the blackberries we’d picked the day before and playing hide and seek. The next day was time to go home, but not before we’d managed to squeeze in a little explore around Itchen Valley Country Park and a slap up lunch at one of our nearby pubs. Itchen Valley homes Southampton’s Go Ape and I have to say, while I’m normally a little bit of a wimp I thought it looked extremely fun and wouldn’t mind giving it a go sometime! 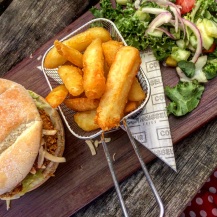 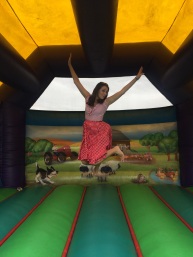 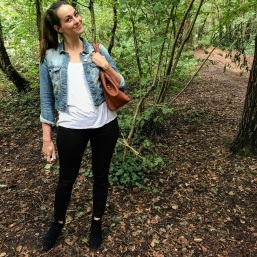 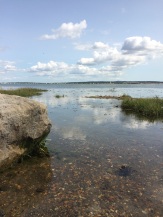 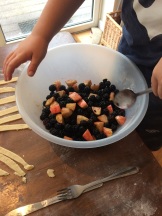 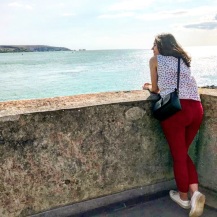 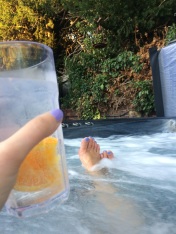 The middle of the month welcomed my nieces who were staying with my parents for a week during the holidays! I love it when they come to visit as we get to do all sorts of fun stuff, and true to form we had a jam packed couple of days. First up was a trip to visit Dippy the Dinosaur who was on tour at Birmingham’s Museum and Art Gallery. I loved seeing him again as it reminds me of being small and the girls had a whale of a time taking part in all sorts of dino themed activities! Next up they had a slot booked at Rock Up, and indoor climbing centre which is one of their favourites. Here they have the Leap Of Faith, where you have to climb to the top of one of the walls then jump and try to grab hold of a trapeze! Keira has done it before and succeeded again with such grace for little ‘un! Josie had her first attempt and her arms just weren’t quite long enough to grab hold, but I couldn’t believe how brave she was – she looked so tiny all the way up there! We followed up with tea at Pizza Express which has become a bit of a tradition when they visit, then got an early night ready for the next days activities! Friday was my favourite as we were off to West Midlands Safari Park! It was tricky at times keeping the girls occupied as we drove through the park, but they had a fab time and all were agreed that feeding the giraffes was a highlight! Probably my favourite part though was walking through the Lemur Forest, where the Lemurs happily jumped through the trees above our heads and pretty much posed for photos! Such a lovely day, but then any day where I get to touch animals is basically a treat for me… 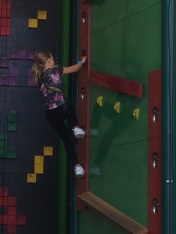 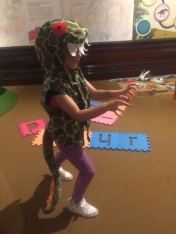 Oh what a lovely old month it has been! If only we could hold on to Summer for just a little while longer!

10 thoughts on “August Round Up”

Had to sit down for todays #ootd because I drank A LOT of gin and I’m out of practice at day drinking…
Let’s talk cake!! (Sorry, still posting wedding spam! I’ll stop soon, I promise!)
Apologies for posting yet another gratuitous wedding shot, but it dawned on me that I never posted an official #ootd despite the fact I got married on #favouritefrockfriday - plus today we celebrated one week of married life at a spa so I’m not looking particularly presentable!
My wedding flats! I decided I needed an insurance pair since I don’t get to wear heels as much as I used to and I didn’t want to risk spoiling the evening by not being able to dance! As it turns out though they only went on for the walk home. Not that they’ll be wasted though - shoes this pretty will always be worn!
Can you read the actual awkwardness on my face at having my outfit photo taken in public, because we left it too late and it was getting dark! But I had to capture it, because WE WENT OUT OUT! And also I matched my drink to my ensemble so surely that scores extra points of some kind?
Can we just take a moment to appreciate my stunning bridesmaids? I know the bride is meant to be the centre of attention on the big day but these incredible women definitely gave me a run for my money and I don’t mind one bit.
Loading Comments...
%d bloggers like this: