And just like that another month is done! Somehow I blinked and seemed to miss May – it doesn’t seem fathomable, but here we are nearing the halfway point of the year in which I will become a parent, and I can’t quite get my head around it! It may be partly due to the fact that compared to April, May has been a little bit of a snooze fest, what with us spending almost all of our spare time sorting through the house to get it extension ready! It’s been a huge exercise – my gosh, how two people can come to accumulate such a large amount of crap in just 18 months I do not know – and I’ve created a rather large pile of clothing and shoes for the eBay/charity shop pile which is slightly terrifying, but it’s been pretty cathartic too and I feel as though nesting is well under way! The really good news is that we had the house revalued last week and the assessment has come back where we were hoping which has freed up some funds for us to spend on the project which makes all the hard work worth it!

The weather has been similarly dull. Literally. After some real stonkers of sunny days over Easter the weather turned for the cooler this month and we’ve seen our fair share of rainy, grey nothingness. Thankfully the temperatures have stayed fairly pleasant though, meaning most of the month has been spent in what I’m starting to think may be my signature pregnancy style – the floaty midi dress! Most of these frocks are ones I’ve had for a while so I’m absolutely thrilled that they are still fitting me this far through, though I have to admit I may have acquired a few more this month, including BOTH polka dotted ones, but I don’t believe you can have too many polka dots, soooo…. 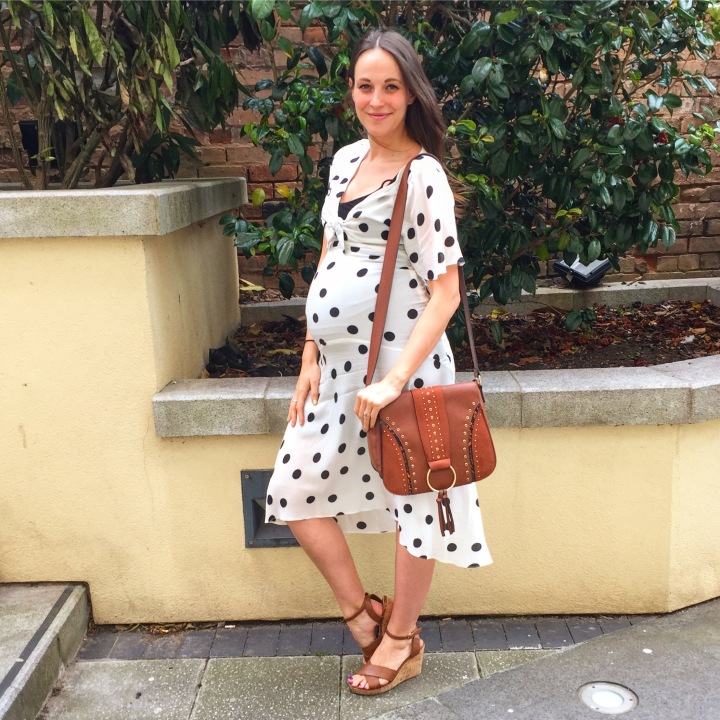 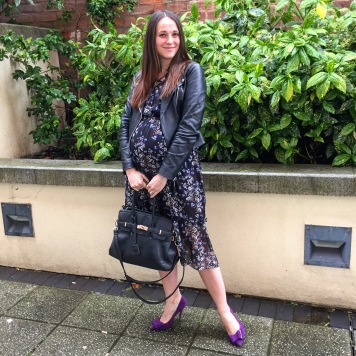 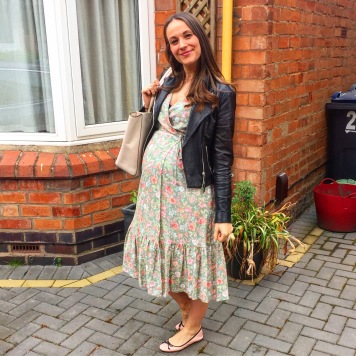 Stretchy tube dresses and skirts have still been making a regular appearance and I can’t see that changing to be honest. They are just so darn comfy and I’m still feeling really good about my body and showing off my little (well, rapidly expanding, actually…) bump! Long may it continue! 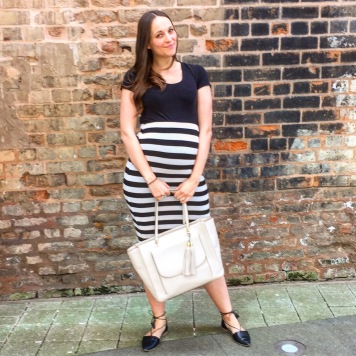 While most of my beloved pleated midis are now a little too snug around the middle, two are still clinging on. These velvet beauties are so snuggly soft, and have waistbands with just the right amount of stretch, meaning they have been a firm favourite lately. They also have the added bonus of making my belly extra stroke-able, though I’m not sure if that is a blessing or a curse! 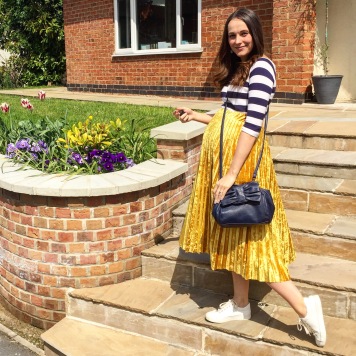 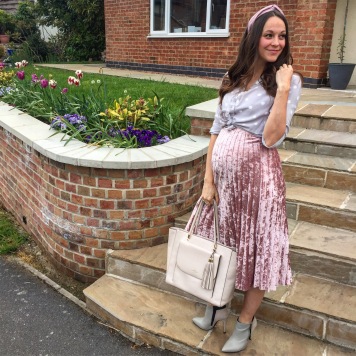 And of course, my reliable maternity jeans are still in constant rotation. All three pairs have been enjoying regular outings so as much as I was reluctant to splurge on specific maternity wear I have most definitely been getting my money’s worth. Honestly, they are so comfy that once they’re on I don’t want to take them off! Tops, on the other hand, I’ve found much harder to wear. Even my looser blouses have started to feel a little tight across the bump and have an unattractive tendency to bunch up around the bust, so other than the few swing style tops I have, like this striped sleeveless blouse from Shein, I’m struggling a little in this department. Might be time to start perusing those maternity ranges soon! 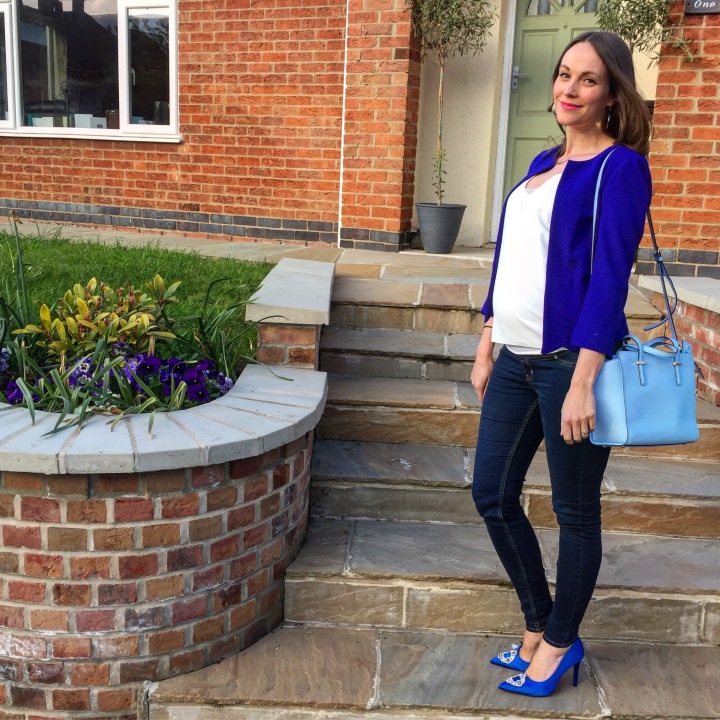 Buy of the Month

This one was a toughie because as I alluded to earlier more than a couple of new frocks found their way into my wardrobe this month (just as well as I cleared all that extra space then, right?!) The best has to be this gorgeous polka dotted number from H&M though, if only because of the hard graft it took to get it! You may well remember it from a shopping post a whole year ago. Well, it turns out I was a little hasty in waxing lyrical about how great it was, because this was back before H&M reworked their sizing and to be frank, despite normally wearing a size 10 there and everywhere else, the dress was obscene. Like, boobs out, knicker flashing obscene! It seriously looked as though I were trying to squeeze into a child’s dress! So I switched it for a 12, and while this was slightly less obscene I still didn’t feel comfortable going out in it. By this stage, of course, the dress had sold out completely and I’d started to fear I’d screwed up. I couldn’t stop thinking about that dress though – the heart wants what it wants. And finally a whole year later I spotted a size 14 on eBay! I thought it was unlikely it was going to fit me, especially as I’m now 6 months preggers. Whaddya know – it does! And it’s such a joyful little dress, I’m so glad I persevered! 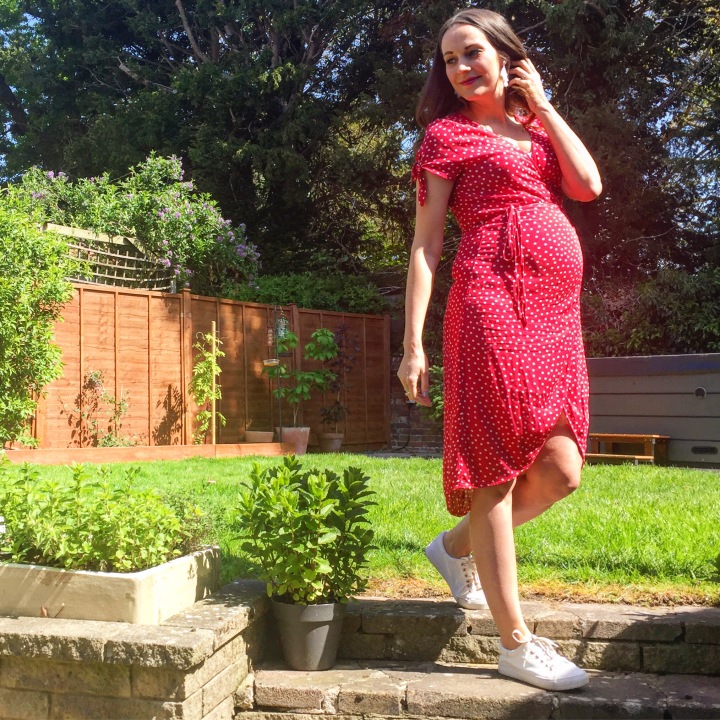 Outfit of the Month

Again, kind of tough to call this month as I’ve picked up so many lovely little treats and I’ve been feeing that whole ‘pregnant and glowing’ thing, but in the end I had to go with this one. I have this ancient tube dress from New Look in three colours, but for some reason it’s the green that I always feel the best in. I paired it with another of my eBay bargains, this Insta-famous Topshop bag which I managed to score with the tags still on for the bargain price of £8, and I have to say I felt a million dollars! Green and leopard always goes so well together, don’t you think?

And that was May! Will I still be squeezing into my pre-pregnancy clobber this time next month? Only time will tell! Tune in next time!

9 thoughts on “May Outfit Roundup”

Another blissful day of sunshine! I do t know about you but it’s lifted my spirits no end, I always find life’s stresses far more easy to deal with when the sun is shining. The ice cream van being back also helped of course... Some warm, dry weather had also breathed some new life into the shoe challenge as I’ve been able to wear something other than boots! Save 51/181 isn’t particularly exciting, just a beaten up old pair of gold flats, but a firm fixture of my spring/summer wardrobe. Gold is such a great neutral! These are about to give up on me any minute though so I’m on the lookout for replacements!
Woohoo, the ice cream van is back in the village this afternoon! It’s quickly becoming the highlight of our week! What are you looking forward to this weekend?
Oh, hello Spring! A full day of warmth and sunshine, to what do we owe this pleasure?? I can’t quite believe I’m wearing bare legs and my beloved leather jacket! I spotted this dress way back when shops first opened in the summer in TK Maxx. I resisted because I had not long started my attempt at not buying new, but it was one of those that haunted my thoughts. Inspired by the spring like weather I had a quick look on eBay this week for the first time in yonks and what do you know, there it was! Still with the tags on and a mere £2.99. So now I have my dress AND can be smug about resisting temptation the first time! I really want to pair this with some pastel coloured heels but we have an outdoor play date this afternoon, so shoe save 50/181 are these polka dot trainers, and the last pair of them to save to boot! Happy Friday everyone, hope you’re getting to enjoy some sun too!
Had a little helper with my #fridayfeet today! He wasn’t in my original vision but he insisted on sitting in my lap while I was taking the photos and turns out his Dad had picked out amazingly appropriate PJs last night so we went with it! See my stories for a behind the scenes exclusive 😂 These were a little treat for my birthday - I think they might be the happiest shoes that ever existed! ROLL ON SUMMER!!
Comfy and casual for a day in the park (where else?!) I was tempted to go for a two save day and change into some heels when I got home, but turns out I couldn’t be bothered so it’s a boring one today - just my everyday white trainers for save 49/181. Until a few years ago trainers were a purely functional item, but these days I have succumbed to their charms and have three pairs, plus a willingness to add more at some point! You may have noticed my total to save has gone up by one - I got new shoes! They’ll be debuting tomorrow but you can catch them on my stories for now!
It’s a gorgeously sunny and mild day here today, but despite my constant moaning about the cold I find myself suddenly feeling wistful for wintery snowy days... sorry, Mother Nature, seems you can’t win with me!
Loading Comments...
Comment
×
%d bloggers like this: