Friends of mine will already know this story, but it’s a good ‘un, so I thought I’d share.

So, I’m catching my regular bus home from work. It’s about 5.30pm, so it’s pretty busy, and it’s been a nice day so there is a larger than usual assortment of undesirable people on board. Think topless dudes who’ve been drinking all day and squawky girls who think you want to know the ins and outs of the argument they’re having with their boyfriend, the way they’re screeching at him down the phone. This girl, though, was different.

She looked about 16 or 17. Pretty, dressed nicely. Just a normal teenage girl, minding her own business, trying not to breathe in that lovely aroma of stale beer seeping from the pores of the oaf next to her. Eventually that aroma appeared to get too much for her as she moved to the seat at the front, the one right behind the driver, though I barely noticed any of this, because, well I had hairy, booze-drenched oafs of my own to worry about thanks!

The interesting part came when I got up to get off. My stop is by some traffic lights so I was stood there for a few minutes, and I noticed she was staring at my feet. Now, this is not unusual. I have a shoe collection I’m proud of, and hey, I spend a hell of a lot of time staring at other girls feet. Like, probably more time than I actually should. Once, I almost walked into the sale rail in Selfridges because I was busy checking out the pair of blue suede ankle boots some lucky lady was trying on! There was nothing odd about what she said either:

Me – (thinking, well, yeah, of course you do. They’re pretty awesome!) “Why thank you!”

SG – “Can you get them here?” (Here, by the way, was Kings Heath High Street, a small suburb in Birmingham)

Me – (All snotty and patronising) “No, sorry,” (you know, in that really insincere way that says ‘I’m not sorry at all’. What a stuck up cow I was being that day!) “You can get them online though. Or in town?”

SG – (All disappointed, which I get actually, because come to think of it, it would be pretty great if there was a Kurt Geiger store on Kings Heath High Street) “Oh. No, that won’t work. I need them now. I have no shoes you see.”

So I look down, and sure enough, this girl is barefooted. Completely, 100% barefooted, on the number 50 bus on a Tuesday rush our.

And then I exited the bus. Really fast. And walked most of the way home looking over my shoulder, because I was suddenly convinced she was going to mug me for my Carvela Lotty Pumps! To this day I have no idea whether it was a concious decision not to wear shoes that day, or if she’s mislaid them somehow (though, seriously, someone is going to have to fill me in on how you lose your shoes, because I’m struggling to think of any scenarios where that is likely!) but that is the kind of person who catches my bus peeps, complete and utter fruitloops! 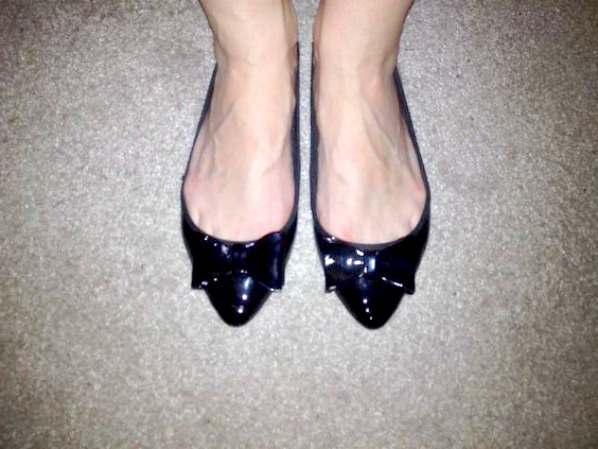 S’cuse the messy mum bun, we just got back from Bailey’s first swimming lesson since Covid kicked off! I was a bit apprehensive as we’ve only been in the pool once since then during the Summer, but I needn’t have worried as he LOVED every minute! The second we walked into the health club and he spotted the pool he started yelling ‘WAAATEEEER!!!’ and the biggest challenge was stopping him from launching himself in there fully clothed! It was so wonderful to see him laughing, kicking and splashing again, we absolutely can’t wait till next week!
I’m cheating again and using a throwback outfit shot, because Fridays are for pretty frocks and I’m anything but pretty today 😴
Here’s lookin’ at you, kid! No, I didn’t lie on the floor in a public park in inappropriate shoes to catch this shot, I’m just in my garden. I only do that when I have a photographer on hand to make me feel better about my Insta-wankery. Embarrassment shared is embarrassment halved, right? Too bad said photographer wasn’t about to catch the behind the scenes though. Embarrassment aplenty there...
Full disclosure - the sunglasses are largely because I couldn’t be arsed to do my face today. And the jumpsuit is because I couldn’t be arsed to get dressed. But I made an effort with the boots! And finally got another shoe save under my belt with number 82/181!
What a glorious day yesterday was. I caught a train. I wandered around my beloved home city in the sunshine, marvelling at how much it’s changed since I was last here. I drank a coffee in the sunshine with a book. But best of all I got to spend a few hours putting the world to rights over drinks and delicious food for the first time in over a year and it felt MARVELLOUS!! Dan, Bailey and I made the most of the pub last summer but I haven’t been able to have a good old fashioned girls catch up and I’ve missed it so much! I also finally got to try out @dishoombhm after months of hearing friends rave about it, and it definitely lived up to expectations! Steered clear of the shops though - far too busy for me!
Fifty shades of beige... sorry, still not got my style mojo back just yet, and it’s not being helped by this bizarre polarising weather we’re having. What do you wear for a day sat outside when you’ll be sweating in the sunshine but hypothermic in the shade?? I’ve gone for layers and hoped for the best... anyway, my face is betraying my true feelings here because right now I’m on a train to Brum to spend a child free afternoon in my fave city with a fave girl and I’m actually VERY EXCITED!!
Loading Comments...
Comment
×
<span>%d</span> bloggers like this: