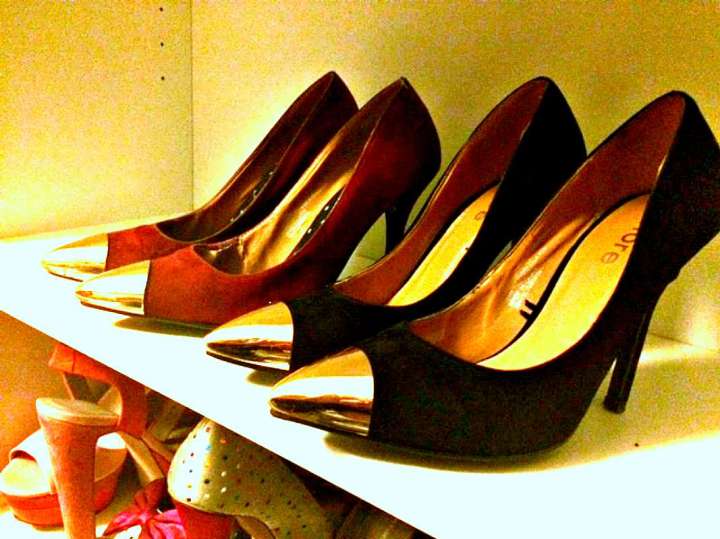 I own a lot of cheap shoes. Well, I own a lot of shoes full stop truth be told, but my point was, I don’t actually spend huge amounts of money on shoes. I have my Louboutins, of course, a rather extravagant gift for my 30th, and the odd ‘investment’ purchase. I’m also pretty skilled at navigating outlet stores, flash sales and eBay in order to feed my habit, so I’ve got plenty of expensive shoes that I actually bought for peanuts. But I’ve also got a lot of genuinely cheap shoes. As in, “Ooooh, look at these Primark bargains! £12?? Might as well get them in every colour then…” Normally, these cheap shoes are the frivolous ones. The ones that are a bit of fun, but you’re only likely to wear to the odd party or two, because, come on, if they cost you less than £20, they just aren’t going to last very long, are they?

Every now and then, though, you find a pair that are basically perfect. You think to yourself, ‘There’s no way these could be that cheap?! There must have been some mistake!’ But no! They really are that cheap, so you WILL go ahead and buy them in every colour, and you will wear them everyday, and just when you have declared them The Greatest Shoes Ever To Grace Your Feet, they will break on you, and leave you bereft. That’s what happened to me with my beloved Matalan toe cap pumps anyway….

A couple of years ago, toe cap shoes were all the rage. I’d decided I wanted to get some but couldn’t find any I really liked (That’s a lie. Zara had a great pair that came in turquoise or coral, but I could really justify parting with £140 since I couldn’t decide which colour I wanted the most….) Most of the (affordable) versions looked a bit naff – like the toe cap had just been painted on rather than a proper metal cap. Then one day on a trip to Matalan with my Mum, I spotted them. Perfect shape, lovely dark oxblood colour and most importantly, a proper, pointy, gold metal toe cap. It was love at first sight. They looked so much more expensive than their modest £16! They also turned out to be amazingly comfortable, so it wasn’t long before I caved and bought another pair in black. How lucky I thought I was, to have found such a bargain. And they did turn out to be pretty lucky. And also the unluckiest shoes I’ve ever owned….

Not long after I’d bought the oxblood pair I was wearing them out for cocktails on my 30th Birthday. I’d been wearing them all day at work without a hitch, but suddenly three cocktails in, I heard a suspicious crack. Yep, the heel had snapped. It didn’t break off entirely, I just about managed to hobble about for the rest of the evening, but it was clear it wasn’t fixable, and I was gutted. You’d think I’d have the sense to chalk this up to experience and accept that they were just too cheap. But no. I decided I couldn’t cope without them, and got straight on eBay the next morning on the off chance some idiot had bought them and decided they didn’t need The Greatest Shoes Ever To Grace My Feet. But wait! Someone actually was that stupid! And so I came to find my first replacement, brand new with tags and even cheaper than before! Talk about lucky! 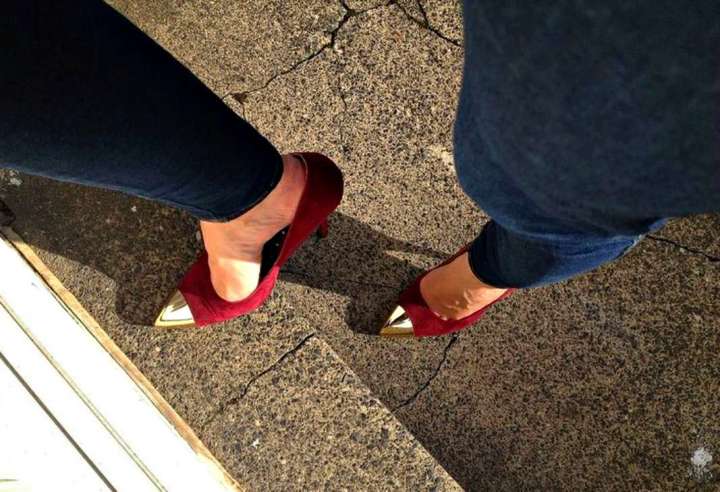 Now, the oxblood pair are great, and I love them dearly, but the black ones? They’re the real superstars, because everyone knows you can wear black with pretty much everything, right? So it wasn’t long before they became my go-to work shoe. They were smart, the toe cap made them a little more interesting than a plain pair of black courts and I was constantly getting told they looked more pricey than they were. And we had a really good innings too. A good 2 years they lasted me – not too shabby for a £16 pair of shoes. Till one fateful night this summer I allowed the pup to sleep in my bed with me, and oh how that dastardly pup betrayed me. I was awoken in the night by the sounds of stirring and realised she’d gotten out of bed. Then there it was – that dreaded suspicious crack again. Not the heel this time, but the toe – that beautiful real metal toe cap I loved so much had a split right down the middle and a collection of doggy teeth marks (because, of course, they weren’t made of metal at all, just gold coated plastic like you’d expect for £16). God damn dog. She sure was in the proverbial dog house that night. 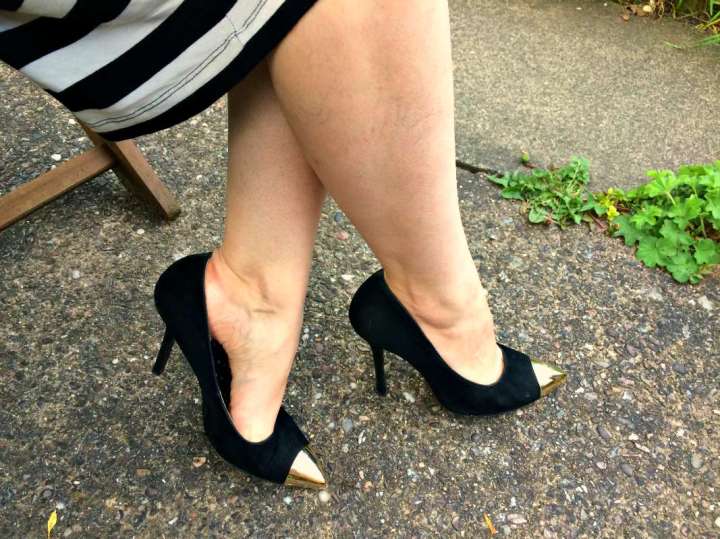 I didn’t hold out much hope, but I thought I may aswell give eBay another shot. You never know, it worked out last time, but surely no-one would be selling a brand new pair again, 2 whole years later, would they? HOLY CRAP, YES THEY WOULD! There they were! What. Are. The. Chances. Told you – luckiest shoes ever. You’d think I would have learned, by now though, that there was no happy ending to this story, wouldn’t you? But no. I swanned around in my second pair of brand new shoes as smug as smug can be, till a mere two weeks later I was stood chatting with a colleague and there it came again. CRACK! Snap goes the heel. Crap. Crap, crap, crap. And it seems third time not lucky in this case, because my daily searches and eBay alerts have so far been fruitless. No-one is selling a black pair in a size 5, it seems my luck has run out. There are, however, 3 people currently selling the oxblood pair in my size, which is just freaking typical. And very annoying. Though I kinda want to buy them now as spares, you know, just in case….

I will keep searching though! Keep your fingers crossed for me, and tune in next time to find out if I ever find them!*

*You don’t really have to tune in. I know this isn’t really edge of the seat stuff! Though just to warn you, I probably will be sure to document the occasion should it happen….

Amazing how a gale force wind can help add a bit of swish to your outfit shot…! These shirred bodice dresses are fast becoming my favourite kind of maternity wear, and the best bit is they will double up as perfect breastfeeding attire too! Decided to save a pair of my more fancy heels since we clearly weren’t going anywhere today - these gold heels make save number 130/183!
New shoooooooes! I’ve been looking for a replacement for my tan wedges since they broke last year. Obviously these aren’t actually wedges, but I decided that chunky heel would do just as good a job! I bloody love ‘em! Just annoyed they’ve arrived just in time for the rain 😂
Still battling through my aversion to skirts now that my bump starts directly under my boobs… persevering though, because I haven’t worn this skirt in ages, and it fits, which right now is a bonus! Saved another pair of flats - I always forget about these in favour of others, but I’m not sure why as they’re the perfect summer throw on shoe! 129/183 down, 54 to go!
Never thought that one day Thursdays would be my favourite days, but here we are… 💕
Can you tell I don’t like ironing?? I probably would have if I was going into the office to be fair, but since I wasn’t I couldn’t be arsed! I wasn’t going to let it stop me wearing this #newtome dress though! I already own it in blue and ADORE how flattering it is so I snapped up this pink version when I spotted in on Vinted last week! It also gave me the opportunity to save these Ted Baker shoes, making the tally 128/183! I just love the pretty print on these, but it can make them hard to style, especially as I don’t own that many block colour dresses, so very happy this one is already paying dividends!
My sweet peas have really been the gift that keeps on giving this year! It always feels like a shame to pick them, but it’s only ever a day or two before they’ve bounced back in abundance! Seeing those pretty pink and purple petals from my kitchen window while I make my morning coffee never fails to make me smile 😊
Loading Comments...
%d bloggers like this: