It’s that time of year again, when I start waxing lyrical about light nights and sunshine and dreaming about beer gardens and being able to wear shoes again, blah blah blah. I’m so predictable, aren’t I? Like, you could actually use me instead of a calendar. A crazy, bipolar calendar that was happy and excited for the three weeks or so of British Summer and glum and despondent for the rest of the year. Except I would probably forget all of the Birthdays and key dates you bothered to write in me because I was too busy dwelling on something completely irrelevant in the grand scheme of things that will be all but a distant memory in a few months, yet right now is THE WORST THING EVER TO HAPPEN EVER EVER EVER like The Walking Dead finishing or that dress I wanted selling out or something (and now you know what kind if a mood I’m in this week). So perhaps on second thoughts, just buy a regular calendar….

Anyway, the point is, like clockwork, the moment the clocks change and I start getting to see actual daylight outside the office, things take a dramatic turn for the cheerful. It really shouldn’t make a difference, but it does. Having a crappy day and then having to trek home in a rainstorm, when your umbrella will inevitably break and the bus will be late and your feet will be drenched because you forgot these boots aren’t waterproof actually is just so much more depressing. Having a crappy day and then putting the world to rights in the beer garden of a pub with your friends over a vat of wine and it still being light enough to walk the dog in the park when you get home rather than drag it’s neurotic self around the street in the dark – 100 times easier to handle. I guess it’s because during the Winter you feel like you do nothing but work, commute, clean the house then go back to work again. In those longer Summer days you suddenly feel like you now how SO MUCH TIME FOR ACTIVITIES! Look, I have a life now outside work! How did that happen? Not that you actually achieve anything more of course. Except maybe hangovers. There are definitely more hangovers… 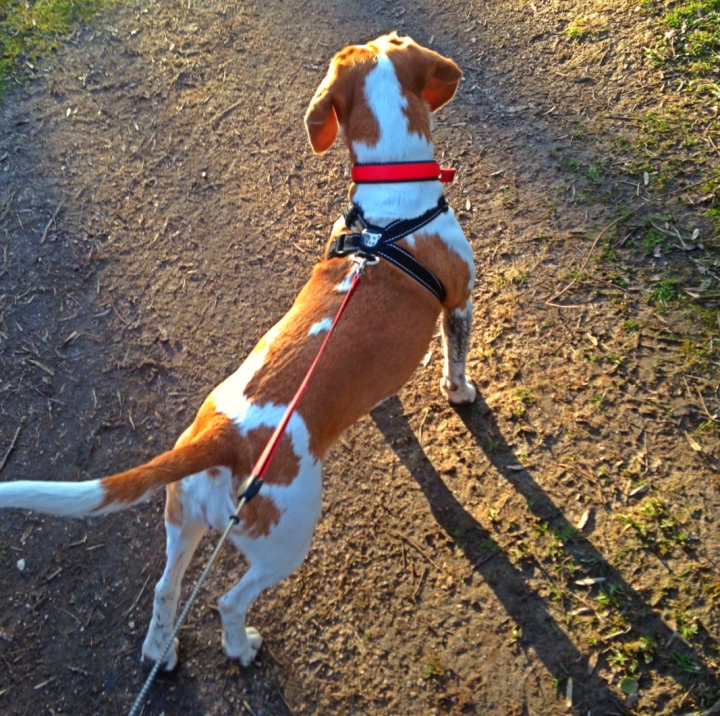 I actually haven’t been using the extra daylight to drink as it happens. Or so far anyway (give me time, I’ve only had about 4 days of it so far!) I’ve actually been using it to spend some quality time with the pup and take her on lovely, long, evening walkies. Here’s where you say ‘Shut the front door, Steph, you took the dog for a walk? That is so dramatically different to what you normally do with your spare time!’ and I can understand your lack of surprise here, but it does feel different. Because I notice stuff so much more in daylight that I didn’t before (before you go ‘erm yeah, that’s ’cause you can’t see in the dark…’ that’s not what I meant). Like, do birds stop singing in the Winter? Because I swear I couldn’t remember what birds singing sounded like until this week (though I think I might already written this at some point. Probably this exact time last year. Like I said, clockwork…) and, did you know what a duck fight looks like? Because I do. I witnessed not one, but two last week. In case you’re interested, two boy ducks fighting over a girl duck is remarkably similar to two boy humans fighting over a girl human. They spend a lot of time flapping their wings and quacking at each other before throwing a few lairy pecks at each other. In the meantime the girl duck gets bored and flies off to find a less macho duck, and the boy ducks don’t even notice.

So, you learn something new everyday. And all thanks to an extra couple of hours of daylight.

Saturday snuggles
Just waved my sister off after a visit. She’s off to Greece on Tuesday. So I absolutely haven’t spent the last few hours crying over old holiday pics…
Amazing how a gale force wind can help add a bit of swish to your outfit shot…! These shirred bodice dresses are fast becoming my favourite kind of maternity wear, and the best bit is they will double up as perfect breastfeeding attire too! Decided to save a pair of my more fancy heels since we clearly weren’t going anywhere today - these gold heels make save number 130/183!
New shoooooooes! I’ve been looking for a replacement for my tan wedges since they broke last year. Obviously these aren’t actually wedges, but I decided that chunky heel would do just as good a job! I bloody love ‘em! Just annoyed they’ve arrived just in time for the rain 😂
Still battling through my aversion to skirts now that my bump starts directly under my boobs… persevering though, because I haven’t worn this skirt in ages, and it fits, which right now is a bonus! Saved another pair of flats - I always forget about these in favour of others, but I’m not sure why as they’re the perfect summer throw on shoe! 129/183 down, 54 to go!
Never thought that one day Thursdays would be my favourite days, but here we are… 💕
Loading Comments...
%d bloggers like this: