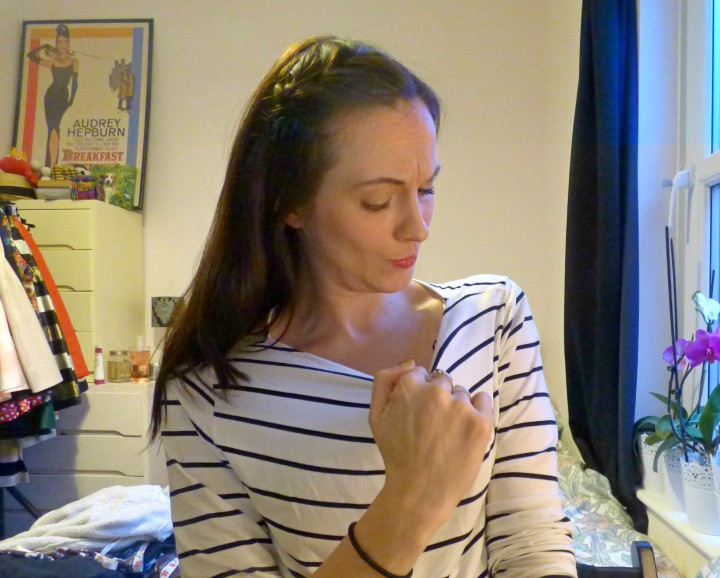 When I was 18 I wanted bigger boobs.

Not crazy big ones, big boobs back then were not what they are now. A double D cup was considered more than ample in those days. Then along came the likes of Jordan and, well the rest is history, as they say… So anyway, I wasn’t after boobs as big as my head or anything, but I definitely wanted more in the bust department. So much so, that for a while I did ponder cosmetic surgery and how I might go about getting the money to do it.

Growing up I was always a skinny child. My arms and legs were a bit too gangly for my body and I was straight up and down. I had knobbly knees and tiny bird-like wrists and ankles and hip bones that jutted out well into my 20’s. Some people seem to think being slim as a teen must mean you had no issues with your image growing up, that you were saved from any mean jokes or jibes and that you must have had an easy time of it, but that just isn’t true. Kids are mean, whatever you look like, and being thin didn’t give me a free pass. I was teased just as much as the next girl, and the easiest thing for them to pick on was my lack of cleavage!

There really was a lack of it too – to be honest, my boobs didn’t really come in till I was about 25! I tried all the usual tricks – push up bras, chicken fillets, good old fashioned bra stuffing – but there was no fooling anyone – there just wasn’t anything there to work with. When I bent down in a flimsy top I wasn’t risking flashing a bit of nipple – you could see all the way down to my knickers for christs sake! Yep, I was as flat as an ironing board. And that meant just one thing to my peers. Boys loved boobs, therefore no boobs meant you couldn’t possibly be attractive, and as much as I’d love to say I was bigger (LOLZ) than that, rose above it and scoffed at their immaturity, I of course soon enough believed they were probably right.

During those years I was not capable of seeing the positives. That I seemed to be blessed with clear skin and had never really had to worry about spots. That I could eat whatever I wanted and never had to be that girl that was always on a diet. That, actually, I was a perfectly ordinary looking person full stop and not the freakish proportions I’d convinced myself to be. All I could focus on was the vast expanse of skin where my cleavage was supposed to be, and I truly thought I’d be far happier in life if only I had boobs.

Hindsight is a wonderful thing though, and these days I could not feel more different. Those days where I could eat what I wanted and sit on my ass all weekend and never put a pound on are looooong gone. I laugh at the younger me who went through a phase of drinking slimming shakes on top of my meals in the hopes I might gain weight – because like a numpty I assumed I would gain it evenly all over and transform into a perfect hourglass shape over night! Oh how I miss that washboard stomach! My boobs did come in the end, and although they’re still a modest size I thank my lucky stars I didn’t tinker with nature and get them done.

There are the classic reasons. It’s nice to wear a slinky camisole without having to worry about bra straps. It’s undoubtedly easier to buy pretty undies when you are smaller in the bust department. I’ll never know that awkward irritation when a man addresses my chest instead of my face, and don’t even get me started on the obvious benefits when running for a bus…..! But there is more to it than that. Whereas back when I was younger I associated breasts with what made you attractive, now I have the opposite fear – I don’t want people to find me attractive because of what I have in my bra. And they just wouldn’t be ‘me’. It’s not that I think they aren’t attractive – I can appreciate a beautiful pair as much as the next person – I’m just not sure I could carry them off. I kind of like being a Wallpaper Wendy and blending into the background (yes me, the girl in a full skirt and heels on a Tuesday afternoon…..) I’m just not sure I could handle the attention an ample bust might bring. I’m already the kind of person who feels like maybe they should apologise for their presence, imagine if I had a huge rack? I’d probably feel the need to announce them as I entered a space, like ‘Oh hi everyone. Here I am. And here are my boobs!’ as if alerting people to their presence might help address the elephant in the room, so to speak. Nope, we’re a happy pairing these days, my small boobs and me.

Although, it is annoying that I can’t wear Lindy Bop’s Ophelia or Vanessa dresses… Seriously Lindy Bop, could you do a girl a favour and stop releasing them in gorgeous new prints every 5 minutes? It’s like sartorial torture!

Packing for a couple of days away wasn’t easy this week - we’re in that lovely pre-storm period where you know the weather will either be sweltering heat of torrential rain but the forecast changes by the minute! I gambled on rain, and luckily it looks like I nailed it! I’m not a rain lover, truth be told, but can’t say it doesn’t feel a tiny bit welcome today!
Up bright and early this morning to get the train over to Birmingham for a couple of days in the office. Was a bit nervous but actually it was really quiet! Was nice to see a lot of faces again at work after a few weeks of it being a ghost town! It’s my first night away from Bailey though since October which I’m not loving, but we just had a lovely little FaceTime 🥰
I don’t normally share Bailey’s face on the grid that much but I had to share this. The second pic is one my mum took while I was at work the other day, and my sister dug the first one of me because she thought we really looked alike. This will sound really daft, but this meant so much to me. Ever since he was born people have commented on how much he looks like his Dad, it always made me feel a tiny bit left out, but now it’s my turn, and it’s really lovely seeing my features in him 😊 EDIT: yes, that’s a cage. No, we don’t keep him in one. Regularly, anyway 😂
Feel like a bit of a walking cliche, but got myself some maternity dungas! Next thing you know I’ll posing on a step ladder while painting the nursery 😂 In all seriousness though, I LOVE them, and they were just the ticket for a morning at soft play! Now on the lookout for some black ones…
DOUBLE JABBED! And feeling good, other than a sore arm, of course! Just another one of those little things that helps to ease my anxiety about the babies. Not that I’ll be throwing caution to the wind or anything, I’m not ready for huge gatherings just yet! But it definitely helps to put my mind at rest a little. And every little helps! Now, I need to go and wrangle a toddler into a car seat as we’re off to soft play! Hope you have fun plans whatever you’re up to!
Bit of an emosh day. Lack of sleep is like a special kind of torture. I was already feeling fragile after this mornings post, then I arrived for my second jab and realised the queue went all the way around the car park and knowing I was going to have to stand in the blazing sun for a long while nearly brought on the tears again, but thankfully it wasn’t too bad and the main thing is, I’m finally double jabbed! Though that isn’t helping the general aches and pains and lethargy! I did save another pair of shoes though, so there’s that…! 127/183 saved now!
Loading Comments...
%d bloggers like this: