I managed to go a whole month without buying anything on eBay! Go me!!

That doesn’t mean, of course, that I didn’t buy anything. Oh no. But I have been what I would call incredibly restrained this month, so I’m deeming April a massive success all round. I am choosing to ignore the vast amount I’ve spent on food and drink because it doesn’t count when you’re on holiday, ok? Don’t go raining on my parade now!

Anyway, back to the task in hand, and rounding up this month’s purchases!

Now, I may have curbed my eBay habit, but there are still 3 new pairs of shoes in my collection, which yes, I know, is starting to get silly (I can now hear my parents saying ‘Starting? STARTING??’) but two of them were gifts and I can’t exactly help that now, can I? And we all know what happened with the third pair because I wrote a lengthy post about it just a couple of weeks ago! But heck, lets just take another minute to bask in their glory shall we? Because they’re still awesome!

My instincts were definitely right because I’ve already worn the khaki pair at least three times! Outdoors and everything! And now that the sun has started to stick around a little longer I’m sure you’ll be seeing an outfit post featuring the others too very soon…!

My next purchase was this rather gorgeous wrap dress from good old Primark:

Now, I did feel a teensy weensy bit guilty for buying this because it is remarkably similar to this one that I bought back in Feb, but what can I say? It called to me, and it was only £15, sooooo….. I’m actually really looking forward to wearing this one as it has a bit of a flamenco vibe that really makes me think of holidays! I couldn’t resist pairing it with my Louboutins for this pic just thanks to the matching red soles, but this would also make a perfect casual hanging-out-in-a-beer-garden dress with sandals and shades, so I’m not worried about getting my money’s worth.

I do genuinely seem drawn to midi frocks at the moment, because I also accidentally bought this Vero Moda dress:

I had no intention of shopping when I bought this – I was actually trying to help my sister spend a Birthday gift card in House Of Fraser when it beckoned me from across the room (I know, asking for trouble). When I saw it was n the sale I got a little over excited, and when I realised it was down to just £15, well, you know how it goes…. Again, I can see this being pretty versatile – that tribal print and purple hue is really summery, but I’m already picturing it with my beloved Dune Stretchy boots in the Winter! 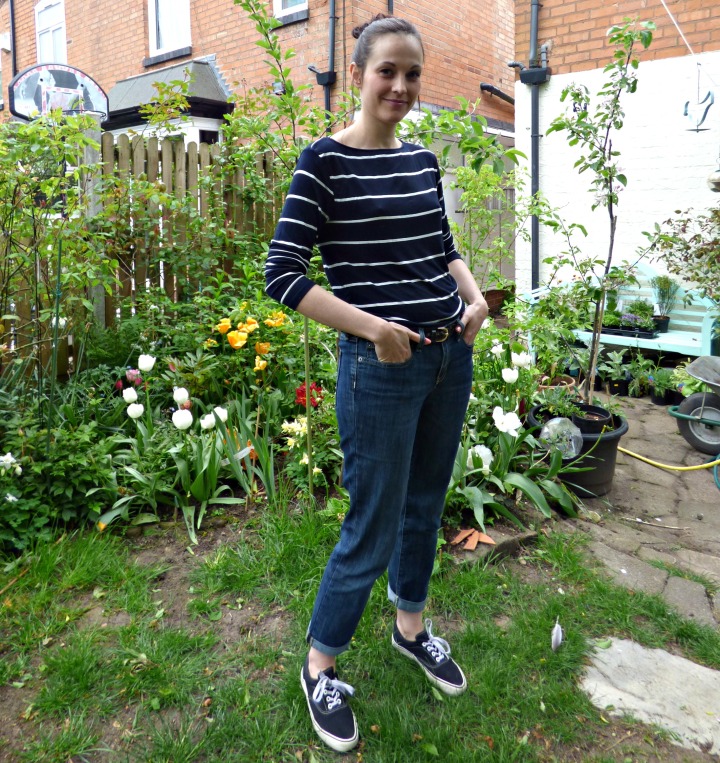 I bought some boyfriend jeans. I know, me! I’ve been after something more casual than my usual skinnies for a while now but kept on resigning them to the realms of ‘things I can’t wear’, but we stopped of at a McArthurGlen Shopping Village the other day where Gap had some ridiculous discounts, and the boy convinced me that I didn’t look hideous. I’m still on the fence myself, but they are darn comfy and I seem to be wearing them an awful lot, so I guess that makes them money well spent!

Oh I also treated myself to these while there thanks to a rather brilliant Beauty store:

So, not too shabby a month on the spending front, almost practical, I’d say! I’m clearly growing.

We’ll see about that next month….!

Thank heavens for sack-like dresses…
I had a long moan in my stories last night about how little I’m enjoying wedding planning right now. But one part that was lovely was out little trip to Birmingham’s Jewellery Quarter on Friday to look at wedding rings! I was only expecting to get some inspo, but we actually ended up choosing and ordering our rings from the first shop we went in! Happily, it’s the same shop from which Dan found my engagement ring and, a year later and by complete coincidence, matching earrings to celebrate Bailey’s birth, so it feels right. More than that though, it was just lovely to spend the time wandering around my home town with Dan and the twins, doing such frivolous things as eating cake and drinking wine in the afternoon! A tiny little reminder of what life was like before 3 children! I wouldn’t take it back for anything, but it’s nice to have a little trip down memory lane sometimes ❤️
I’ve been super lax with the outfit photos lately. Life is very busy what with wedding planning and dealing with the kiddies, who each seem to be going through their own challenging stage right now. And it’s Winter, of course, so I have about 5 minutes of daylight to get photo. But more than anything, I just can’t really be arsed a lot of the time. I’m not loving how anything looks on me and haven’t been able to find the motivation to start working out what suits my new body. Clothes have always been a big part of who I am so I always find this part of motherhood tough. I know I’ll find myself again, but sometimes it’s ok to have a bit if a wallow.
Super sparkly #fridayfeet this week as we’re off to the Jewellery Quarter to start looking at wedding rings! One of my favourite places to have a wander in Brum, is there anything more fun than browsing diamonds I ask you??
Seem to be wearing this cardigan more often than not these days! Just too darn snuggly!
Bailey’s hair - it’s getting a bit silly now. He’s starting to resemble a 2020 BoJo at times, especially when he’s just got out of bed! Combing it can be a bit traumatic and his fringe covers his eyes now so we have to tie the front bits back with a bobble for playgroup! But I still can’t bring myself to cut it. Those butter blonde curls are just too beautiful! I know once they’re gone, they’re gone, and I just can’t quite bear the thought yet. I know when we do finally chop them off he’ll transform into a little boy over night and I just want to hang on to my baby a little bit longer. In the meantime we’ll just have to put up with him wiping his nose into it and everyone thinking he’s a girl, but it’s worth it. What parts of motherhood pulled at your heartstrings unexpectedly?
Loading Comments...
%d bloggers like this: