Considering I only discovered Ralph & Russo around a year ago, it’s quite surprising to me how quickly they have cemented themselves in my head as the ultimate in fantasy footwear. There is something that is just magical about their designs that sets them apart somehow. They aren’t just beautiful shoes, they are almost dreamlike, as though you aren’t quite sure whether or not they are real, or if you dreamt them up! They only carry a fairly small range and it doesn’t change too frequently, but when they do introduce something new, I get very excited indeed.

Today I found an email from them in my inbox entitled ‘Introducing Empire’ and I’m not ashamed to say I emitted a little squeal! I couldn’t wait to see what marvellous new creation they’d dreamt up, and here is what I found: 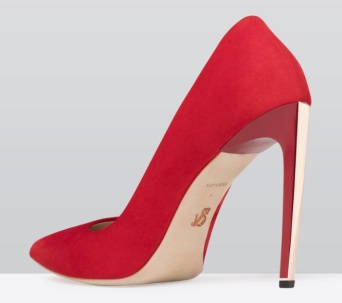 I have to say I was a little surprised. Not in a bad way, though. Not at all. They just seemed like a bit of a departure from their previous releases. Gone were the fairytale florals and creeping vines, the delicate metalwork and charming whimsy. But they are in no way less showstopping. What we have instead is a sleek, modern and beautiful pump that just exudes class. I’m in awe of that stunning geometric metal heel. It’s very reminiscent of the famous Casadei Blade heel, but where Blade’s strength is curvy sexiness, Empire is all about clean, sharp lines and edges. So no competition here – there is definitely room for both in my life!

Ralph & Russo have been extremely generous in that they’ve release Empire in seven – count them, seven, gorgeous colour combinations, but it’s this red suede and rose gold version that had my heart beating the most. I think I’d find it pretty hard to say no to any of them though to be fair!