So, I’ve been back from my hols now for three days. It was absolutely hammering it down as we landed in the dead of night, and is it just me or is it freakin’ freezing now?? Even worse, I only have a few hours to go before the dreaded return to work has to happen as I write this, so I’m not in the most positive of moods right now. My holiday was wonderful – the weather was gorgeous, out hotel was fantastic and we saw and did some amazing things – but the time to get back to reality has arrived and it’s a bitter pill to swallow! My tan already seems to be fading before my eyes, and I’m not 100% certain I can adjust to not having a breakfast buffet prepared for me every morning. Oh how I miss you, cinnamon pancakes! My work phone is still sat on my dresser, the battery having dies nearly 2 weeks ago, waiting to be charged and I’m really struggling to work up the motivation to do so. But I will, because I have to, and all good things must come to an end. It’s time to go back to work and earn the pennies to pay for our next trip, and in the meantime focus on the things that can bring me happiness. By the time you read this my first day back will be over and it won’t have been half as bad as I’m imagining – it never is.

Right now, the main thing that is keeping me motivated is our new home. I was not relishing the thought of coming back to the dark and the cold, but the one thing that remained a glimmer of excitement in me was the thought of getting back to our house and making it the way we want it. We had talked at length while away about some of our plans and the thought of putting them into motion is keeping me from falling into a Winter induced pit of despair! I hope to keep you guys updated, so I tried to capture a few shots when we first got here – they aren’t great as we were is a rush to get everything unloaded off the van, but hopefully they give you an idea of what we have to work with: 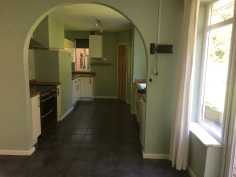 It’s a lovely, spacious bungalow (woohoo, no more hoovering stairs, which is literally the worst of the chores amirite??) with three bedrooms, a living room and a nice big kitchen diner. We have lots we want to do, but we are lucky that it’s in a very livable state for the time being, with decor that isn’t a million miles away from my own tastes, so we can take our time deciding how and when to tackle things. The most exciting part is this though:

At the side of the house is a huge double garage and outdoor toilet, which we have plans to knock through and convert into a master bedroom and ensuite bathroom! It also has a huge driveway, so we hope we might be able to bring the front of the garage forwards and have the ultimate of house goals (for me anyway) – a walk in closet! We have an architect coming around next week to start looking at ideas, so fingers crossed!

I think my favourite part of it all though was bringing Bonnie round yesterday to have a sniff around. Because we’ll have to be leaving her alone sometimes we decided not to move her in straight away. She already spends every other week with my ex so we want to introduce her slowly and help her settle in without getting overwhelmed. I’ll still be spending a few days a week in Birmingham for the time being while I finish my driving lessons so she’ll be staying with my parents, but we had lots of fun taking her to Pets at Home to pick out a new crate and bowls and some toys to help her feel at home. Let me rephrase that – she is a dog, not a person, so I picked out her new things and she had lots of fun sniffing at the treats and wondering how she could get off the lead to go and play with the bunnies…. Either way, it was lovely watching her smell out her new surroundings and make herself at home. Her favourite part is definitely the garden, which she can run around in to her heart’s content! Now we just have to figure out away to stop her drinking from the pond instead of her lovely, shiny new bowl…!

Right now we’re sat on our sofa with Bonnie snoozing on our feet, watching an episode of Lost before heading out on her first walkies here, and despite the rain, and impending work, and dark nights, and the distinct lack of cinnamon pancakes, I feel very happy indeed.

3 thoughts on “Reasons to be Cheerful – Home Sweet Home”