It’s been a busy old day today and I didn’t actually have a post planned, so apologies for the hastily written and badly formatted mobile post, but since my Monday posts are about the things that keep me positive and smiling I couldn’t keep this news to myself!

My Mum and Dad decided a while back that since Bonnie would be moving over to Loughborough soon it was as good a time as any to get a new pet (or two!) We were always a cat family while I was growing up, with Bonnie being the first dog in the house since before I was born, and while I don’t think they’ve closed the door on getting a dog of their own at some point, they decided to get a cat. Well, that was the original plan anyway….

As it happened, not long after they first started discussing the idea a friend of my sister’s told her they had a litter of kittens that needed a home. After being shown some pictures of the adorable things they decided now might as well be the time and picked out a pair of sweet little Totoiseshell & White girls, which has always been their favourite breed. No, you aren’t imagining things, we did just seemingly transition from the idea of one cat to the reality of two kittens – this kind of thing happens a lot in my family. Now you know how my shoe habit got started! Anyway….

We were getting very excited about the imminent arrival of our new friends (partly because we hadn’t had a cat around the house since our last beloved cat Tilly died years ago, but also because KITTENS) but not long before the day itself my Dad sent some bad news. Somehow, there had been some confusion and their chosen kitties had been given to someone else! The two they were offered instead were boys, which they didn’t want, so they decided not to go ahead. This was obviously very disappointing, but it seems this must have made them realise how much they wanted them, because no sooner had they delivered the news they were sending me pictures of another two kittens they had found via the RSPCA!! That didn’t quite go smoothly either, as the poor little things got sick and couldn’t come home when first planned. At one point my Dad started to get paranoid they had actually died and the shelter didn’t know how to tell them! But they hadn’t, they were soon fighting fit and ready to join the family! They arrived yesterday, and they are #OMGSOCUTE!! Honestly, I’m not even sure I can adequately describe just how tiny they are! So without further ado, meet Primrose and Katniss! 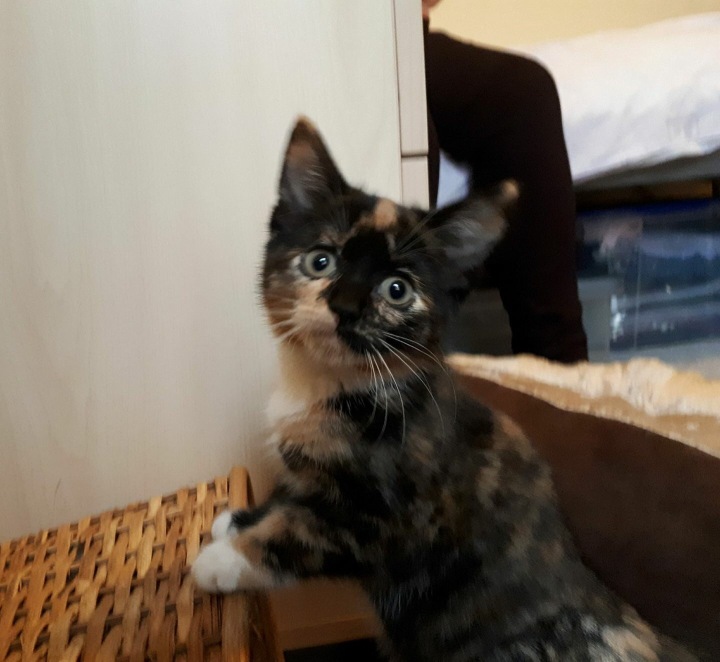 Those are the names the shelter gave them – obviously they were Hunger Games fans! I kinda like them, but Mum and Dad are keen to change them so please let me know your suggestions!

So, today in general was pretty pants, but then I got to spend the last hour playing with these gorgeous little beings, which pretty much makes it the best Monday ever, don’t you agree??

4 thoughts on “Reasons to be Cheerful – New Additions to the Family!”