You know that terrible habit I have of dressing in cliches? Well, I did it again. I’ve been wanting to photograph my beloved Collectif Mimi dress for quite some time now. It’s been in regular rotation since I bagged it in the sale last year, but somehow I seem to have managed never to feature it in an outfit post. Part of the problem is probably that black watch tartan has always had a bit of a wintery feel for me so I wear this dress far more during the colder months rather than the summer. The colder months are of course also the darker months, meaning it can be more than a little tricky to capture those lovely blue and green checks in all their glory. Every time I’ve tried so far I’ve been too disappointed to post the results, so I had made a mental note to try again as soon as the sun decided to show it’s head.

That time finally came around, and happily it coincided with Dan and my little weekend jaunt, which is always the best time to grab some great outfit photos! And then it dawned on me – I WAS GOING TO FREAKIN’ SCOTLAND!! This was a sign, no? The perfect weekend, the perfect weather, and in Scotland, no less! It was like I couldn’t NOT wear the dress really. Ho ho ho, what a jolly little escapade, I shall wear the tartan dress in Scotland, LOLZ! How hilarious am I? I thought to myself as I casually tossed it into my suitcase.

But then the doubts crept in. Pulling it out to wear on that sunny morning in Newcastle, getting ready to hit the road North, I suddenly questioned my choice. Hang on. Is this cricket? Is it actually ok for me to head to another country clad in the cloth of their clan, like I’m a bloody native or something? Is it offensive? A tiny bit racist, even? Google will know (Yes. I googled it. I’m not kidding) After a few minutes of anxious scrolling and the genuine relief of finding I wasn’t the only person in the world who had asked this question, I had it on good authority (everything on Google is true, right?) that black watch tartan was actually the perfect plaid for a non-Scottish person, as it’s roots lie in the military and it was standard issue. Phew. Crisis over. BUT WAIT! What if someone takes this to mean I’m supportive of some military organisation I’ve never heard of? Oh god. I don’t think I can wear this dress….

And then I realised I’d spent so long contemplating the damned dress that we only had 10 minutes left before we had to check out and I was just going to have to wear the stupid thing and be done with it. Ladies and Gentlemen, welcome to the weird and wonderful inner workings of my brain.

As I’m sure everyone other than me already knew, no-one gives a toss about you wearing tartan in Scotland and I’m pleased to report I was not mobbed in the street or publically accused of cultural appropriation. Yay! In fact, I’m pretty sure no-one even noticed. Obviously. The main thing is, I did get to finally photograph the dress, which is AWESOME despite my ridiculous and completely unwarranted concerns…. 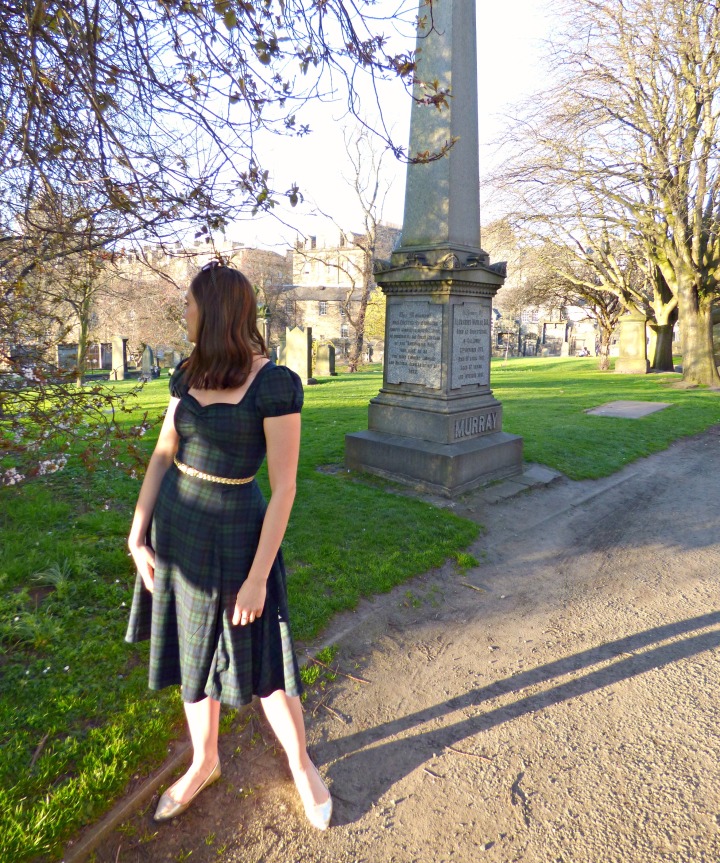 I’ve actually just realised how daft it is that I was so busy worrying that I was dissing Scottish heritage by wearing tartan that I didn’t even stop to ask myself weather it was a tad disrespectful to prance around in a graveyard taking photos… Probs best not to think too hard about that one Steph…!