In case you hadn’t noticed, I’m a bit of a gin fiend…. So when I found out Dan had booked us a tour of the Edinburgh Gin Distillery as a birthday present back in Feb, I was absolutely thrilled! Not only to they make one of my favourite gins, my knowledge of the stuff is based solely on drinking experience, and not educated in anyway, so I was really excited to learn more about my favourite tipple and how it’s made!

We started the tour with a little welcome from a very friendly team and were directed to sit in the charming little Heads & Tales bar – which opens to the public at certain times and sometimes holds events – while we waited for everyone to arrive. Once they had – there was only a fairly small number of us as it isn’t a big place at all – we were ushered into a room to start the event. Our host Alan (who was fantastic!) began the session off by giving us a very amusing and enlightening talk about the history of gin, dating right back to the 17th Century and covering everything from Victorian Gin Lane to the Gin Riots and the implementation of the Gin Act. I was genuinely enthralled – it was fascinating to learn how gin became the drink it is today and even learnt some interesting facts – my favourite being that James Bond was actually always a gin drinker until Smirnoff sponsored the film Dr No in 1962 and changed his preference to vodka as an advert for their brand! I was amazed to find out that one of the reasons we have seen such a surge in the popularity of gin in the last few years is because some of the restrictions imposed during the Gin Act, first implemented in the 1700’s, were only lifted in 2008 making it possible for small independent distillers to start producing gin again! This brought us right up to date, and perfect timing for a chat about Edinburgh Gin and how they began, including a run through of all their variations and the botanicals used to flavour them. Once the talk was done we were taken to see the stills and talked through how they work. When we’d first arrived I’d spotted them through glass windows and assumed they were models, but it turned out they were the real thing! The distilling floor contains two of them, and is not really any bigger than a corridor! It was incredible to think that, with the exception of one other still in Leith, all their gin was produced like that, and that they have managed to become so successful.

Next came the fun part – the tasting! We were taken to a cosy little booth where we were given a classic Edinburgh Gin with tonic and orange zest as a palette cleanser, and Alan proceeded to teach us all about the range. First he would ask us to take a sip of the gin neat. Then, once our mouths had recovered he would get us to take another so that we could appreciate the flavours. Then we’d finish with a splash of tonic. We were lucky enough to try three of their gins (4 if you class the G&T!) as well as two of the liqueurs, and I loved all of them! Their Seaside Gin, which is full of beachy botanicals, had a slightly salty edge which was really unusual but not at all unpleasant. I was shocked to find the navy strength Cannonball gin, flavoured with szechuan pepper, was one of my favourites! And we were lucky enough to be there a couple of days after the launch of their newest gin, 1670, which is a collaboration with The Royal Botanical Garden, where all of the botanicals are grown – this one had a lovely herbal taste which again was really different to the usual offerings. I’m pretty well established with the taste of their liqueurs already, but very much enjoyed tasting the Plum & Vanilla and Rose & Pomegranate samples! 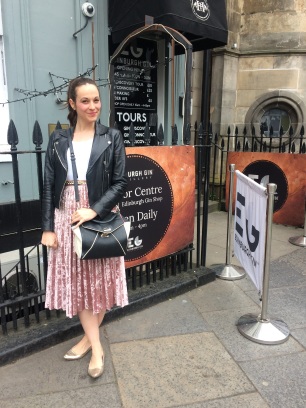 The tour included the gift of a 20cl bottle each to take home – we were allowed to choose which one which was a nice surprise – and a 10% discount in the store which I made the most of by grabbing a bottle of the 1670 as a souvenir! We had an absolutely fantastic time – even Dan, who doesn’t really like gin that much – and I couldn’t recommend a visit enough! There are several different tours on offer but they book up quickly, so head on over to the website for more info if you fancy giving it a go! The best thing about this place is the small, boutiquey feel. Everyone there is so friendly and so obviously passionate about their gin that it’s really infectious. I was worried my lack of knowledge might be an issue but it really wasn’t and I’d love to go back and try the Gin Making tour!

It’s made me want to visit some more now – any recommendations?

One thought on “Edinburgh Gin – The Gin Connossieur’s Tour”

There was an error retrieving images from Instagram. An attempt will be remade in a few minutes.