WARNING: It might be Spring already, but those awful indoor outfit shots aren’t quite over…. Don’t say I didn’t warn you.

You know how I’m always going on about how much I love tea dresses? Well, you probably haven’t absorbed that much to be fair, I know most of the time when I’m talking most people just hear ‘Blah, blah, blah, tea dresses….. blah, blah, blah, my dog…… blah, blah, blah, more tea dresses, blah, blah…..’ Anyway, if you have been listening out there, you won’t have failed to notice that a tea dress in the winter is  pretty much like uniform to me. I even wrote this post about wearing one every day of the week once! On those mornings when I wake up and it’s dark and grey and I don’t feel like going outside it’s just so easy to throw one on over a pair of tights and still look as though you’ve made an effort!

It’s no wonder they’ve remained a constant in the fashion world since they first appeared in the 40’s thanks to their versatility, but these days they come in so many shapes and styles that finding the right one can be tricky. I should know, I’ve sampled an absurd amount of them! The more classic styles with a longer hemline can have a tendency to look a little frumpy on some, and some are just so darn short they actually border on obscene, losing that demure, vintage aesthetic I love so much. Thankfully I have managed to track down the perfect one though, and isn’t it just always the way – it’s actually an ancient Primark number that I’ll have no hope in hell of replacing if it ever gives up on me! 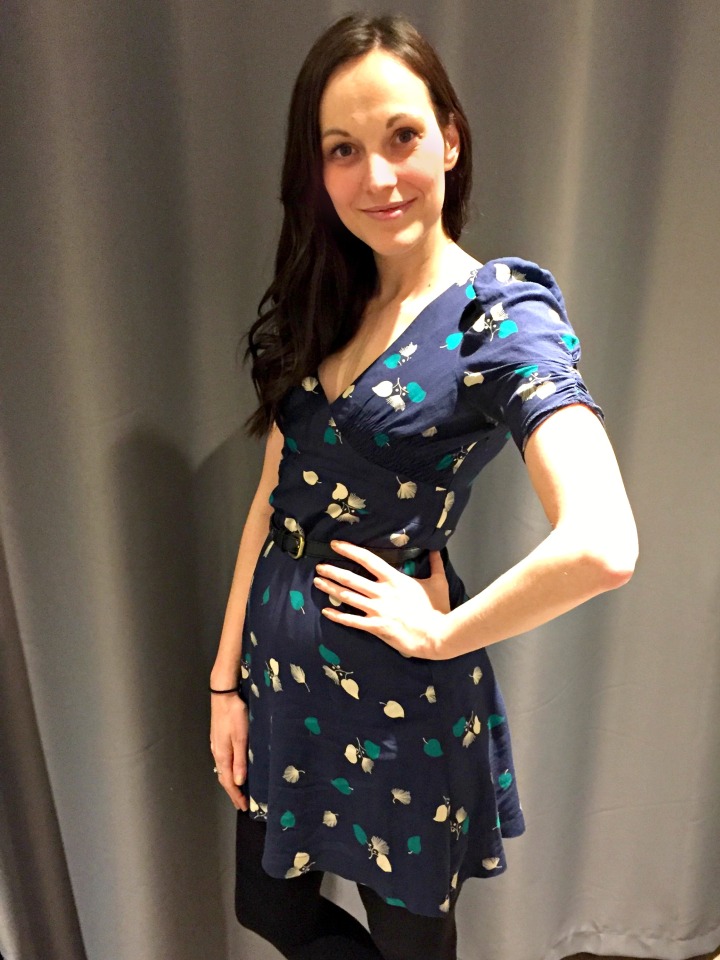 I absolutely love everything about this dress, from the sweet leaf print to the cute puffed sleeves. It’s an extremely flattering cut which skims over any lumps and bumps just so, and while the shape and details are typical of an authentic 40’s frock, the more modern length is just right on me. Seriously, I don’t know what I’ll do if this frock ever dies on me! Oh wait, of course I do, I’ll stalk it forevermore on eBay and moan about it right here! You’d better cross your fingers the dress lasts, people….

2 thoughts on “Outfit: The Tea Dress to End All Tea Dresses”

Had to sit down for todays #ootd because I drank A LOT of gin and I’m out of practice at day drinking…
Let’s talk cake!! (Sorry, still posting wedding spam! I’ll stop soon, I promise!)
Apologies for posting yet another gratuitous wedding shot, but it dawned on me that I never posted an official #ootd despite the fact I got married on #favouritefrockfriday - plus today we celebrated one week of married life at a spa so I’m not looking particularly presentable!
My wedding flats! I decided I needed an insurance pair since I don’t get to wear heels as much as I used to and I didn’t want to risk spoiling the evening by not being able to dance! As it turns out though they only went on for the walk home. Not that they’ll be wasted though - shoes this pretty will always be worn!
Can you read the actual awkwardness on my face at having my outfit photo taken in public, because we left it too late and it was getting dark! But I had to capture it, because WE WENT OUT OUT! And also I matched my drink to my ensemble so surely that scores extra points of some kind?
Can we just take a moment to appreciate my stunning bridesmaids? I know the bride is meant to be the centre of attention on the big day but these incredible women definitely gave me a run for my money and I don’t mind one bit.
Loading Comments...
%d bloggers like this: