I don’t know if you’ve noticed, but I don’t actually know very much about ‘fashion’. I don’t mean in the general sense. I know the basics. I know the difference between a midi and a maxi, for example. I am well versed in the language of box pleats and bias cuts and tea length hems. I could tell you what a skort is, though I might question why it’s a thing…..! But when it comes to ‘fashion’ I know diddly squat. Despite my love for all things sartorial, I’m not a slave to current trends. Oh, I’m sure I’m as guilty as the next girl at being subconsciously convinced that I suddenly and desperately need a certain dress or a pair of shoes (normally thanks to embedded advertising – damn you ASOS and your wiley promotional skills!) but I tend to buy things based on what I like, not what I think is ‘cool’, which is largely why I have a wardrobe full of frothy skirts and a substantial lack of casual wear…! So, not really caring whether or not something is considered ‘en vogue’ or not, I am completely in the dark most of the time as to what is hot and what is not.

This works for me – I find it hard to quell my insatiable shopping urges as it is without the added fear of looking ‘soooo last season’ – but it does mean that I usually don’t know about what is the next big thing until it appears to have taken over the high street completely. Often, the trend in question is something that leaves me a little bemused. Like flamingos. Where on earth did all the flamingos come from? Not that I’m anti flamingo, you understand, I think they’re kind of cute, but they are everywhere. EVERYWHERE. But more often than not, I can tell something is suddenly fashionable purely on the basis that I personally would look like a complete numpty if I tried to wear it.

Much like flamingos, ruffles seem to have spread like wildfire lately, as I discovered while browsing my local Zara the other day. I’m not averse to the odd ruffle. I am a fan of volume, after all, and see nothing wrong with a bit of frill detailing here and there. This year though, ruffles have gone extreme. It’s pretty hard to find a sleeve or hem that isn’t ruffled in Zara, and they are BIG. Even the ruffles have ruffles. Exhibit A – this lot: 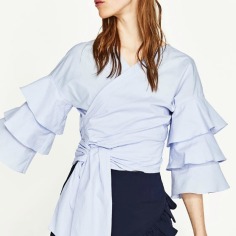 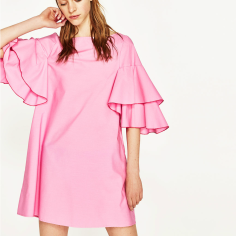 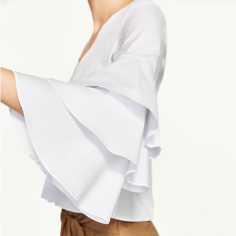 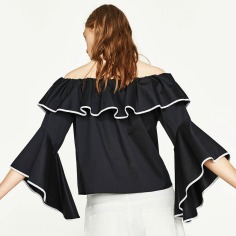 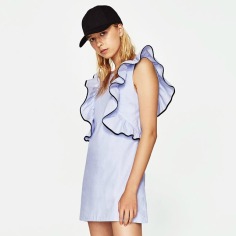 Now, I’m sure this is all the height of fashion, but I for one cannot pull this look off. I would not look like a fashionista, I would look like a demented flamenco dancer, or maybe even one of those dollies you put over toilet rolls. I just do not have the ‘edginess’ this look requires. I am starting to worry that I might struggle to avoid buying at least something that doesn’t fall into this category, though, because they seem to have dominated almost every genre. Dresses, skirts, tops, jackets. I thought maybe trousers would be exempt, but no: 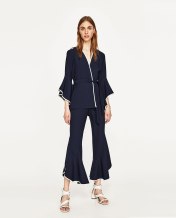 Even the shoes and bags have ruffles! 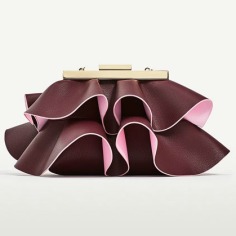 And beware the secret ruffle, because that can catch you out. Like this top – looks simple and demure enough, no? 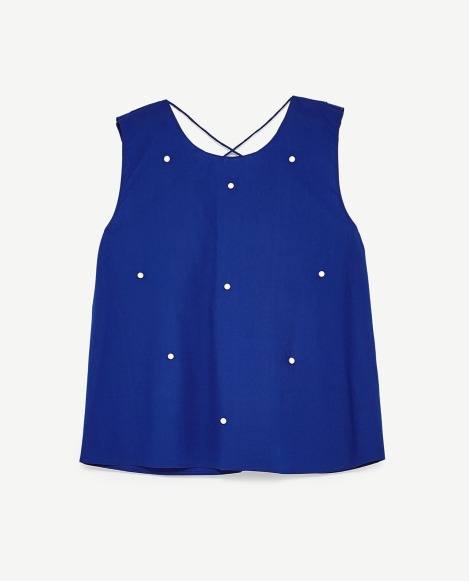 BOOM! RUFFLES!! Zara, why do you trick me so?

I don’t know quite what it is that makes me fear the exaggerated ruffle quite so much as I do – if I saw someone else wearing them I’d probably commend them for their courage and quirkiness. Perhaps it is a fear of standing out (says the girl who wears pouffy skirts to work) but I just can’t see me adopting them. That said, I remember telling my mother I’d die before wearing high waisted jeans when I was 16, so you never know…..

How to wear ruffles if you aren’t cool, like me!

Luckily, I was jesting when I said you couldn’t escape the ruffle, and Zara still remains a firm favourite with me thanks to the veritable option of other less trendy and more low key options to choose from. And if you do want to dip your toes in without going the whole hog, there are ways to do so. Try a classic cut with some ruffled detail along the hemline, for example, or a subtle fluted sleeve, which can be very flattering to those who don’t favour their arms. If volume or structure isn’t your thing, go for a floaty fabric for a more romantic, ethereal effect and try a print, which can detract attention from the ‘frilly’ feel. Failing all that, you could avoid full on ruffles altogether and opt instead for some delicate pleating along a sleeve or neckline. If you, like me, also like your frills a little bit less frou-frou, here are some of Zara’s less ‘out there’ offerings: 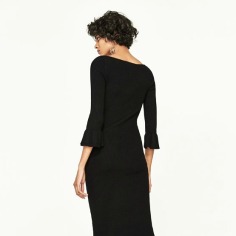 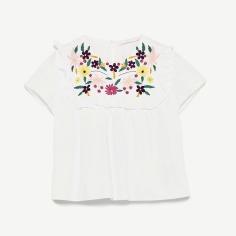 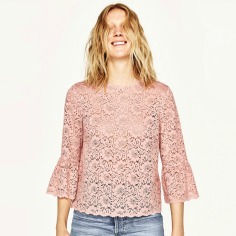 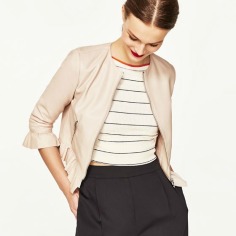 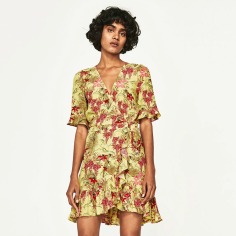 Much better – at least for my fashion backward self! How about you? Are you a fan of the frill?