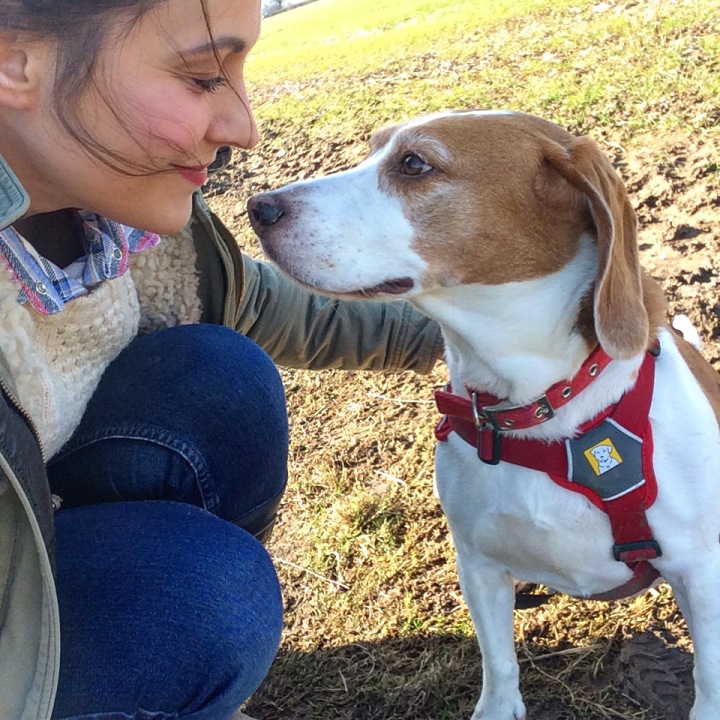 It’s not actually unusual that February passes in a blur for me. Firstly, the fact that the month is 2 or 3 days shorter seems to make the world of difference for no reason at all – why is that??? Secondly, my Birthday falls right in the middle, so the 6 weeks between Christmas and then always seems to pass in the blink of an eye, then the rest of the year spreads out in front of me like an age. It’s a tad deflating really, all of the ‘special occasion’ dates being over and done with so quickly into the year, with Dan’s Birthday not until October and our Anniversary in December. All there is to look forward to now is Spring and Summer, then again, I feel like a little bit of sunshine would give me far more cause to celebrate than turning another year older, soooo…..!

It’s been a pretty good month though to be fair. Mainly because I’ve done…. well, not a lot actually. For the first time in ages it felt like we had plenty of time to ourselves. Well, that said, I had time to myself, because actually Dan had a boys weekend away at the start of the month, and when he has been home he has been busy demolishing our old pond to make way for the hot tub! That does mean our garden looks a lot like this right now…: 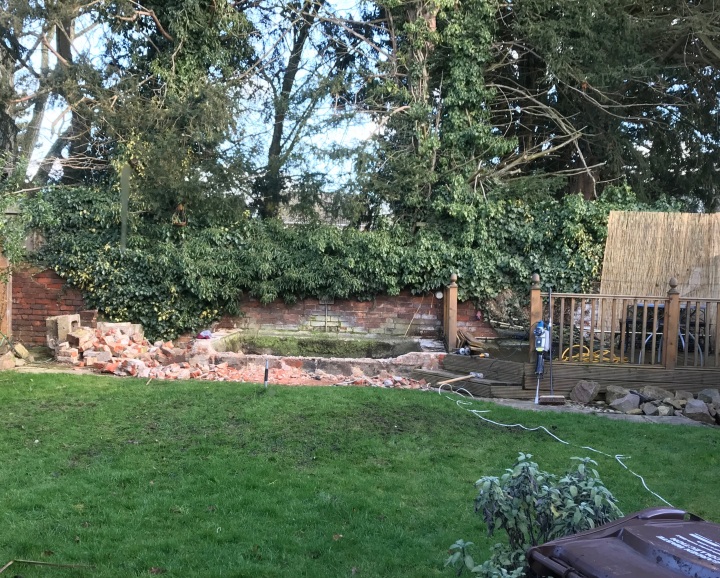 …which isn’t good news for my outfit posts as you may have noticed, because my garden is one of the only places I get around to taking them during the Winter! Anyway, most of the month was spent spending some quality time with my Bonnie dog, who my ex has now agreed, much to my delight, should stay with me full time! I feel a bit sad for him, and I’ll obviously make sure he still gets to see her, but it’s a relief to be able to get into a proper routine and know she is mine for keeps! The rest of the time has been spent doing some good old fashioned reflection on love, life and the universe, which again, you can’t have failed to notice if you’ve been reading recent posts! Turning 35 had me rattled, for some unknown reason, but Dan was a trooper and made sure I had a wonderful Birthday regardless!

It all started on the Thursday before. As my Birthday fell on a Friday this year I had booked it off work and fully intended to spend the day wallowing, but little to my knowledge Dan had other ideas. I knew he had made some sort of plans because he’d told me not to arrange anything, but what I didn’t know was that the next 4 days had all been secretly arranged to make sure I didn’t have anytime to tell myself Birthdays were not fun! First was a meal out with my family on the Thursday night to our favourite Balti restaurant Adil’s in Birmingham. It’s not fancy, but the food is delicious and we’ve been celebrating special occasions there since as long as I can remember. In case you didn’t know, the Balti curry was actually created in Birmingham, so me for me and my family is kinda traditional. The next day I was feeling a little fragile thanks to the bucket load of Prosecco I’d consumed, but I was compos mentis enough to open my gifts with Bonnie, who also has her Birthday on the same day – weird but true! It was my clever little niece that actually pointed out me and Bonnie actually were the same age – no, I don’t have a 35 year old dog, she is actually 5, but of course in dog years that’s the same, and I felt mighty stupid that it took a 9 year old to explain it to me… Anyway, Bons was thrilled with her gifts (yes, I buy my dog gifts, and I wrap the, what of it??) because they were mostly edible (seriously, we have more dog food than human food in our pantry right now…) and I was thrilled with mine because they were AWESOME! Not only did my lovely boy get me the long wished for Hendricks tea set I’ve been trying to track down for an age, but I found out I was being whisked away not once, but twice! We were headed off that very weekend with the pup in tow to a log cabin by the lakes, complete with hot tub! 3 days of marinating in a hot tub? Basically my favourite activity, especially since there will be a little while yet before we’re up and running! It was all over far too quickly, but I still have ore to look forward to, because in April he’s taking me on a trip to Edinburgh to visit my favourite gin’s distillery, with a stop off in Newcastle on the way! What can I say? The boy done good! 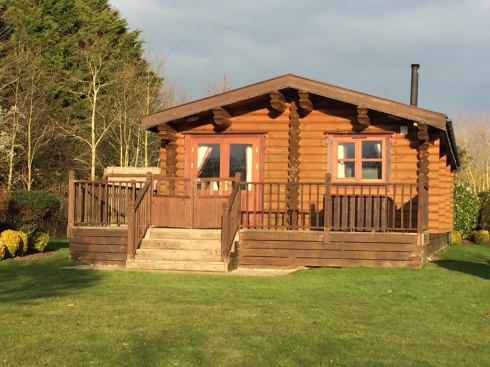 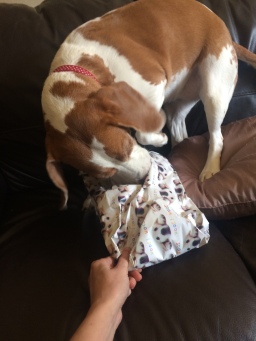 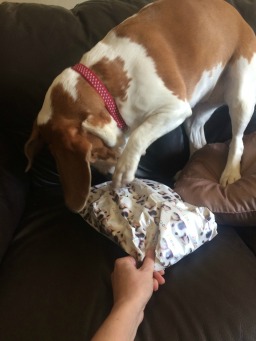 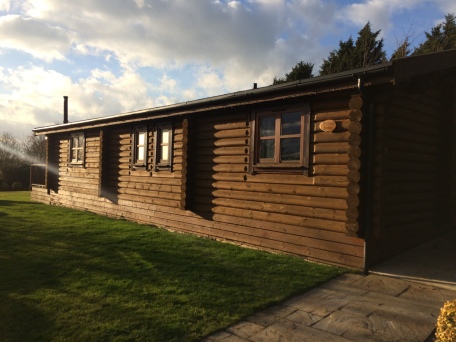 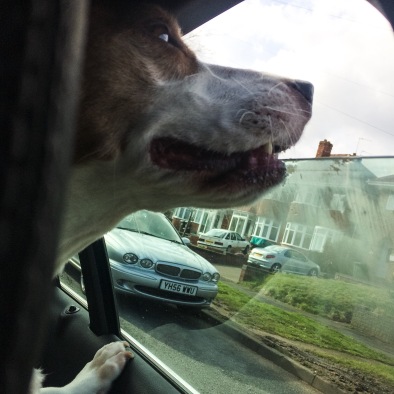 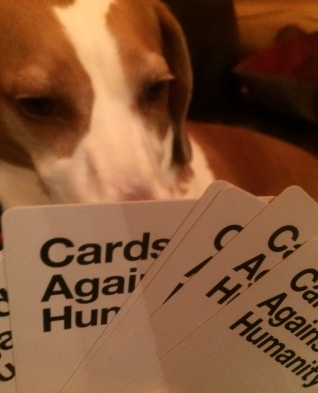 Bonnie enjoyed herself a little too much unfortunately. One night while we were soaking in the tub the little sneak managed to open the fridge by herself! When we decided to call it a night we found her chilling on the bed surrounded by her stolen wares – cheese, pate, butter….. a right little feast! Most of it appeared to be untouched, but then we found the bacon packets…. The greedy little monkey had managed to eat TWO WHOLE PACKETS!! We then didn’t get a great sleep for the next two nights, on the first night because she was ridiculously thirsty and kept waking us up to drink. Then of course she kept waking us up to wee! We were pretty damn tired by the time we left for home, but we still had a lovely time, and the good news is, dsite not really being an advisable meal for a dog, she seems to be fine now!

Of course, the major talk of February has been the #beastfromtheeast! Just this weekend on Instagram I was full of the joys of Spring, then just to pull the rug out from under me, Mother Nature decides to send a vicious blast of air from Siberia over here to dump a load of snow!! Of course, being the UK, the entire country lost it’s collective shit and started acThe following night it had all started to work through and she had a rather upset tummy, so ting like it was armageddon when so far, 2 days in, this is all we’ve had:

Ok. It’s obviously a little odd to get snow this close to March, but still, calm down folks (I bet I wake up to a fresh foot of the white stuff now just to teach me a lesson for being such a cynic… some other parts of the country have been hit really badly, too, just not us!) One thing is for sure though, it might not be all that snowy, but it’s bloody COLD! Which is really, really unfair, because I really NEED sunshine now! March, I’m relying on you…..!

Hope your February was just as fun, but hopefully a little warmer!!

2 thoughts on “February Round Up”