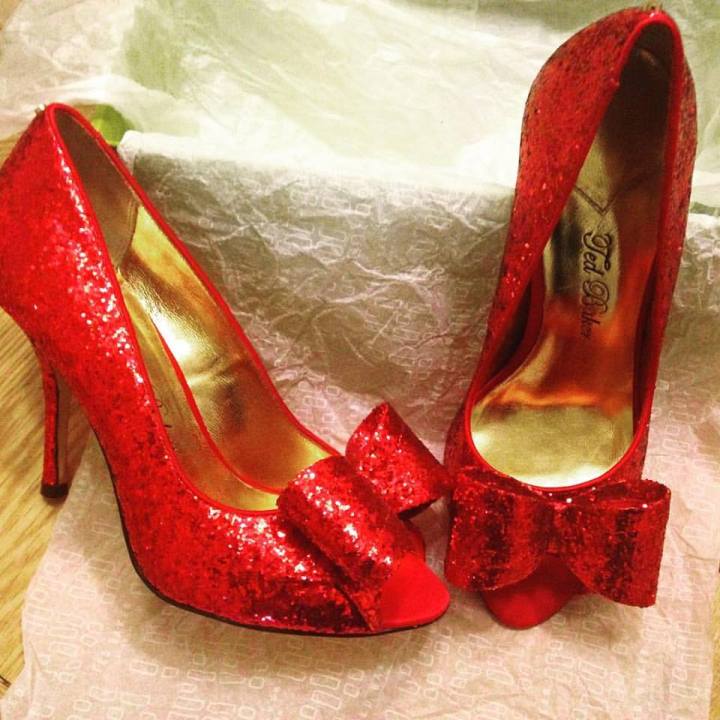 Remember when we talked about the point at which my shoe obsession might cross into the realms of ‘ridiculous’? Well, that time might be now.

For as long as I can remember, I’ve wanted a pair of ruby slippers. This far out dates my love of heels, it goes right back to childhood and I don’t think I’m alone – many a girl must have wanted a pair of sparkly red shoes like Dorothy’s, particularly if they had magic properties! But the desire followed me into adulthood, and while the style of shoe has changed in my imagination over the years, one thing is for sure – I just had to have some glittery red shoes, preferably with a bow on the toe.

A few years ago, I found what I thought was the holy grail. A pair of shoes that fit the bill so perfectly I couldn’t quite believe they were real – the Kurt Geiger Dolly. Dolly was a sweet little sequinned court shoe with a bow on the toe, and came in a range of colours, but most importantly, a bright ruby red, just like Dorothy’s. Gosh, I wanted those shoes. But so did everyone else unfortunately, and while I managed to snag them in green and black, and later rose gold, I never did manage to get my hands on a red pair. The following year KG managed to go one better and released an upgraded version, the Jasmine, which was almost identical just with a slightly more streamlined shape, and rather than sequinned, was encrusted in a ruby red glitter. Though I wouldn’t have thought it possible, I wanted these even more than Dolly! Yet again though, it wasn’t to be, and they all sold out quicker than you could say, ‘There’s no place like home’!

Over the years I tried, and mostly failed, to find a substitute pair. I trawled outlet stores and eBay relentlessly in the hopes that someone would relinquish a pair or drag them out the back of a long forgotten cupboard somewhere, but no. The few pairs that did crop up normally went for far more than I was willing to pay, and eventually I plumped for an inferior pair of glittery peep toes, which at least had the red hue, but were nowhere near what I was looking for. Then last year, just when I had almost given up hope, I stumbled across a new alternative – Ted Baker’s ‘Keanah 2’. They weren’t quite perfect – they were peep toes – but oh my, that bow! They were in my size, brand new in box, and Buy It Now at just £30! I already owned the style in another colour, and there was no denying how stunning they were, and so I made them mine.

Now, that should be where the story ends, but something strange has started happening ever since I got them. It started with this:

Yes – the Dolly was back. After literally years of fruitless searching, someone had listed a pair of the elusive Dolly shoes in red, at at a starting price of 99p! I hovered over the watch button for quite some time – I mean, this was the originals, could I really not buy them?? But really, how many pairs of sparkly red shoes does a girl need (don’t answer that – we all know you can never have enough, but I was trying to be sensible!)? The Ted Bakers had already become known as ‘The Christmas Shoes’ because of their festive properties, so they weren’t exactly the easiest to get wear out of, and I loved my Keanahs enough not to want to replace them. Besides, they were bound to ramp up in price before the auction ended, so I let my sensible side win and tried to put them out of my mind.

Guess what though? They didn’t ramp up in price. Some lucky bugger got them for just over £5 including post and packaging. Well if I’d known that, I’d have bought them anyway dammit! It’s perfectly acceptable to own two pairs of ruby slippers when one of them is that cheap! I was seriously peeved, but there was nothing I could do about it now but chalk it up to experience – and maybe stop looking up red glitter shoes on ebay!

Except I didn’t stop looking guys. And look what I just found today? 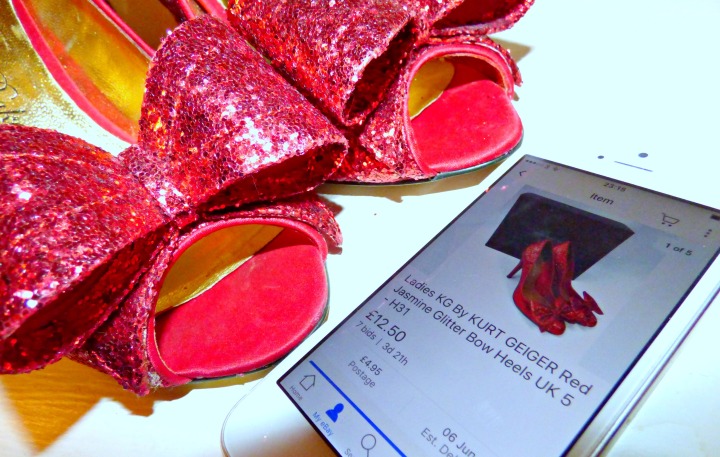 Yes – someone has now gone and listed a pair of Jasmines!! WHY ARE THEY DOING THIS TO ME??? Is it some weird kind of karma or something? These shoes are literally haunting me! I know there is no reasonable justification for buying them, and yet I still want them desperately, and I can’t stop ‘visiting’ them! I think we can officially call this the moment my obsession got ridiculous – it’s not a number that’s too many, or a lack of storage that signifies the shift, it’s when you struggle to stop yourself buying shoes almost identical to a pair you already own, just because you’ve wanted them for years.

So there you have it! Only time will tell whether or not I’ll manage to curb this nonsensical desire to buy them. Until then I’m on an eBay ban!