Now I must start by saying that January has not been a restrained month. Not at all. To be fair, I did hint that this would be the case last month, and true to form, I have been an absolute spend monster so far this year! So if you are passionately anti-disposable fashion or all about conscious spending, you might want to look away now, because I’m sure you will find this post rather offensive to your beliefs. Don’t say I didn’t warn you…!

It all started with Marks & Spencers and their ridiculously good Winter shoe range (now there is a sentence I never thought I’d say…!) I’d already posted about a particular pair on my November wishlist, but the truth is, they had an awful lot of excellent shoes this year. None of them were the sensible kind of shoe though, in fact the pair I featured were pretty typical of what was on offer – velvet, gold, embellishments, glitter. Basically party shoes! And I do not need any party shoes, so I was adamant that I was not going to get any. Then they went down to £20 a pair in the sale. And then £15… Still, my resolve held! I even went in with Dan one lunchtime for a little snoop and agreed that as lovely as they were, I didn’t really need any of them. Besides, there weren’t many sizes left anyway. But then I got a voucher for Christmas. Admittedly just £10, but still, it was an excuse to go in there and look again. I chose to do so on an evening when I’d had a particularly bad time of it at work and was feeling like I needed a pick me up – always a bad idea to go shopping when you’re feeling hard done by! I also seemed to manage to pick that magical day where they’ve started setting up the clearance sale and had dragged all the long forgotten and returned pairs out of the back of the stockroom! Well, fast forward 30 minutes and I was on the train home feeling very much better and clutching a bag containing 4 pairs…! Four pairs that cost me just £50 after my voucher, mind you, but even I have to admit it was a little excessive. In terms of heels ended up going for the Manolo copies in blue and this rather lovely pair of red and gold brocade courts, because I noticed this Christmas that all of my ‘festive’ shoes are a little too high to wear for work (first world problems right there, I know!) Honestly I still feel a smidge guilty about buying these. Less so the flats – I’d actually been meaning to get a couple of pairs of more ‘dressy’ flats as I’m finding myself wearing them so much more these days so I’m actually pretty thrilled with them. Particularly the fuschia ones, I just wish it would stop bloody raining so I could wear them!! Anyway, here they are in all their glory: 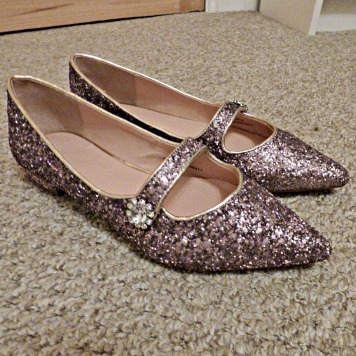 I’d love to say the shoe purchases stopped there, but…: 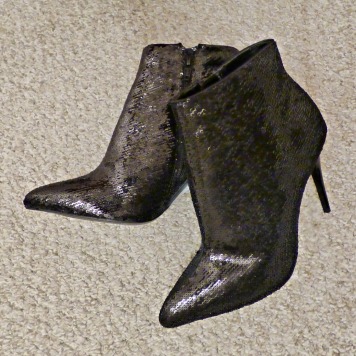 Yeah. This happened. I’d already promised myself the Ted Baker Sailly boots and a new (well, second hand – I’m not all bad!) Kate Spade bag as a bonus treat, but of course once they’d gone on sale they sold out in my size immediately. Luckily for me though, some crazy lady listed them on eBay as an ‘unwanted Christmas gift’ so I managed to score them for nearly half the original price, brand new and never been worn! And as for the New Look sequin boots, I think we all knew after this post that it was inevitable they’d be mine!

Then there was a mini trip to Primark. As always, I only went in to buy tights and some underwear as I’d forgotten to pack some for a couple of days in Birmingham, but I couldn’t really leave without this rather darling little £6 bag could I?

A week later I made the mistake of stumbling into the Zara sale and splurging a little on a few nice tops and a dress, but costing a grand total of just over £40 for the lot I’m pretty happy with my bargains! My favourite has to be the dress, which only cost £7.99! Amazing value, and it’s already been worn twice!

As I already own and love the Wellesley Alessa in turquoise shade I knew this was the one as soon as I saw it, especially at the excellent price of £80! I love that the neutral colours should make it a little easier to match into outfits than my other one and I already have some ideas so watch this space!

After all of that you’d think I have no need for anything else, but it is my Birthday next month, so…..

4 thoughts on “Moments of Weakness – January”

First post twin #ootd! Not going to lie, today was another tough one. We’re in full on survival mode right now. But I did my hair and put on a dress. Baby steps.
The final bump shot. I can’t believe less than a week ago my two babes were still inside there. We took this the night before my section and I’d spent most of the day in tears that my pregnancy was over. It’s been really tough, especially at the end, and I was physically spent, but in no way emotionally ready - I cant even begin to describe just how much I’m going to miss feeling them wriggle inside me. I feel so privileged that I got to experience this miracle twice, so thankful for this body that grew and housed my beautiful children and delivered them to me safely. I will never stop being in awe of how incredible our bodies are ❤️
So - here they are! Finally we are home with our gorgeous baby boys, reunited with thier darling brother Bailey and doggy Bonnie and have had time to get to know them properly to give them names! We’d like to formally introduce Taylor Lenny (left) and Jesse Cooper! Bonnie has been an angel so far, Bailey’s thoughts on the matter are a little more complex but he’s been very sweet, giving them kisses and offering them his cars. We are so happy to be home as a family of 5 (plus dog!) It feels a bit like a beautiful dream 🥰
They’re here…!! Our two new baby boys were delivered safely on Friday morning via c-section. We’re doing well, still in the hospital having treatment for a touch of jaundice but hoping to be reunited with our darling Bailey at home very soon. I will introduce you properly in due course, but just wanted to let you know we’re all fine. Thank you so much for all the lovely messages asking after us, I’ll get back to you all soon once we’re settled. Lots of love in this room right now 🥰
Right, I’m about to do that really Insta-wankery thing of making a big announcement as I leave the room like I’m Elvis or something 😂 The big day is looming ever closer so I’m signing out for a short while to get mentally prepared and spend some quality time with my boys. I know if and when I stop posting people will wonder and I didn’t want anyone to worry. I’ll be around in the background, just not actively posting (I’m pretty much going to be in comfies from here on in anyway so won’t have much to post in the way of interesting outfit photos!) have a lovely week or two, and hopefully I’ll have some exciting news for you soon! Over and out!
We’ve had a lovely day today. The twins are due to arrive around Dan’s birthday so we decided to do some celebrating this weekend. Started the day with pressies, then a lovely long dog walk in the sunshine (I actually hit 10000 steps for the first time in ages today which I didn’t think was even possible!) and a fun afternoon with friends. Feels very surreal to think days like this as a family of three are nearly over!
Loading Comments...
%d bloggers like this: