After last month’s extremely restrained, 3 item wish list, my spidey senses went bonkers this month and I suddenly decided I wanted EVERYTHING. I wish I was joking when I say that. Unfortunately for my savings account though, those Summer lines have been coming out in force, and I just can’t seem to stop myself wanting to consume an entirely new wardrobe. I’m the same most years around this time to be honest, but this month seems to have been particularly bad – I already accidentally splurged in Primark this weekend, and it hasn’t done anything to satisfy my urges! So before I think of even more things to add, I had better kick things off!

Lets start with this one:

Yes, I know I only featured it a couple of days ago, but I haven’t stopped thinking about it since. It’s just so darn classy! I popped into store to check it out in real life – BIG MISTAKE. That print is even more lovely in real life. Thing is though, I suspect it’s one of those frocks that looks better on the hanger than it does on me. It looks as though you probably need to be very flat of tum to pull this off, and I’m, ahem, not. Not once I’ve had a beer or two, anyway. Still though, it’s so beautiful I fear it is destined to be one of those frocks I buy anyway with absolutely no occasion to wear, chance upon one a year or so later, realise I look like a sack of potatoes and feel like crap all night, swear to list it on eBay the next day, then lovingly hang it back up in it’s place just to repeat the whole process again… Yeah, a bit like this one! It’s sadly completely unsuitable.

Yep. I also really want this one, which is basically EXACTLY THE SAME UNSUITABLE SHAPE. What can I say? It’s a sickness. I just saw that pretty magnolia print and all logic went out of the window. I hate myself.

At least this one is a bit more me:

I went on a little holiday to Somerset last week, and it was only when we got there that I realised every dress I’d packed for the week was by Lindy Bop. It was a complete fluke, but it did make me realise I hadn’t been over for a visit for a while so it was probably about time I stopped by to see what I’d been missing. I thought it would be okay see, because it’s been a while since I really fell for a Lindy Bop dress. I’ve been feeling like their recent offerings have bordered a little on the ‘costumey’ side of things a little for me, so I expected to see lots of cutsey, whimsical stuff that made me smile, but that I didn’t necessarily want to buy. And I did. But this one was different. I mean, it isn’t, it’s the very definition of cutsey. But it’s pastel AND polka dotted AND has a bow. So…..

At least these are a bit more sensible: 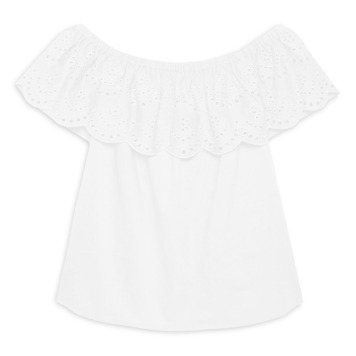 You know how I said that Primark splurge didn’t help to satisfy my urges? It’s because I couldn’t actually get everything I wanted, so has just left a big, frustrated, bardot top shaped hole in my soul. I’m kinda loving the gypsy, folky styles that are popping up at the moment, and these both fit the bill. You can’t really beat a loose white top in Summer (despite my tendency to spoil them…)

That’s probably why I also want this one:

Though, what I’m not sure about is why I’ve suddenly decided I want to dress like a 6 year old? Who knows, I’ve given up trying to work out my fashion impulses at this point.

Lets end then on something far more practical:

I’m sure plenty of people would raise an eyebrow at the thought of a pair of bright red wedges being called described as ‘practical’, but these are probably the one and only item on this list that I could argue I need. See, I’m off to a wedding in a few weeks. The theme is ‘vintage’ (gosh darn it, what on earth will I wear….? LOLZ!!) and it will be mainly outdoors, so heels are not an option. I just can’t see myself being happy going to a wedding in flats though, so wedges are the obvious answer, and as I’m wearing a white cherry print dress I’ve decided I need them to be red or white. Well, bingo. Problem solved.

And the fact I’ve decided I want something I actually have a need for has unnerved me somewhat, so I’m going to sign off there!