As suspected, I haven’t been well behaved again this month. The fact it was my Birthday gave me a little too much of a sense of entitlement unfortunately, and as a result I’ve spent a fair bit more than I was intending, AGAIN. Still, I’m feeling pretty darn happy with my purchases so I can’t say I feel too bad. In fact, I’ve been thinking lately that it’s a little odd how I feel the need to apologise every time I send money on clothes and shoes. It’s almost though I’ve been conditioned to think I’m doing something wrong, when actually, it’s my money, I’m comfortably well off right now (and let’s face it, that’s almost always a temporary situation isn’t it!) with a healthy savings account so I don’t know why I’m supposed to feel bad about spending some of it on things that make me happy. I completely get that ‘disposable fashion’ is a thing to be avoided, but I’m not exactly someone who spends hundreds of the latest trends or fancy items I’m never going to get to wear, and I actually do wear all of the things in my closet – maybe not as often as I’d like, but there certainly aren’t any brand new things languishing in there for years at a time with the tags still on, so I really think it’s time I stopped pretending to feel guilty!

So without further ado, here’s what I’ve been buying this month….

Firstly, I’ve had a bit of an ebay binge this month. Well, I think I could probably say I have a bit of an ebay binge most months, to be fair, but it isn’t often they come up trumps quite like this latest one! I’ve been on the hunt for both of these Oasis dresses for quite some time. Some of you might remember I featured them early in the Summer last year, and deemed them gorgeous but completely unsuitable for my body shape. Then of course I realised I was completely wrong when I bought the similarly shaped Sadie Wrap dress and found that it fit like a dream! As it transpires, rather than clinging awkwardly to my pear shaped bottom half, the draped style of the top actually balances me out rather neatly. So obvs I had to track down every variation I could get my hands on…. 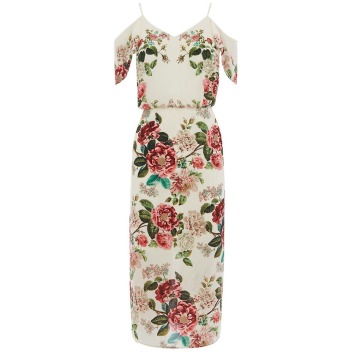 I also managed to acquire an accidental additional purchase. It was a happy side effect of endlessly typing ‘floral Oasis dress’ into eBay over and over, stumbling across this rather sweet little dress. I remembered seeing it in store and being impressed by the lovely stiff skirt and pretty beaded neckline, so when I saw it pop u for such a ridiculously low price I just had to have it!

The next binge came courtesy of Primark. I haven’t been sending all that much in there lately, but with the changing of the season (LOLZ, doesn’t look like it’s changing much from Winter right now, but you get what I mean…) and all the holiday clothes coming out it’s proving very difficult to resist! I only went in to look for a gift for my Niece’s birthday, but £50 later I was the owner of 3 new blouses, a frock and a pair of shoes…. Whoops! Blouses are pretty much my transitional statement for work – whether worn loose over skinny jeans, tucked into a smart pair of trousers or even a pencil skirt, they are such an easy way to look smart for the office. The white bird print blouse was just so pretty and summery, and ever since buying my Ted Baker Sailly boots khaki is a colour I’ve been trying to acquire more of. Also – polka dots…..! 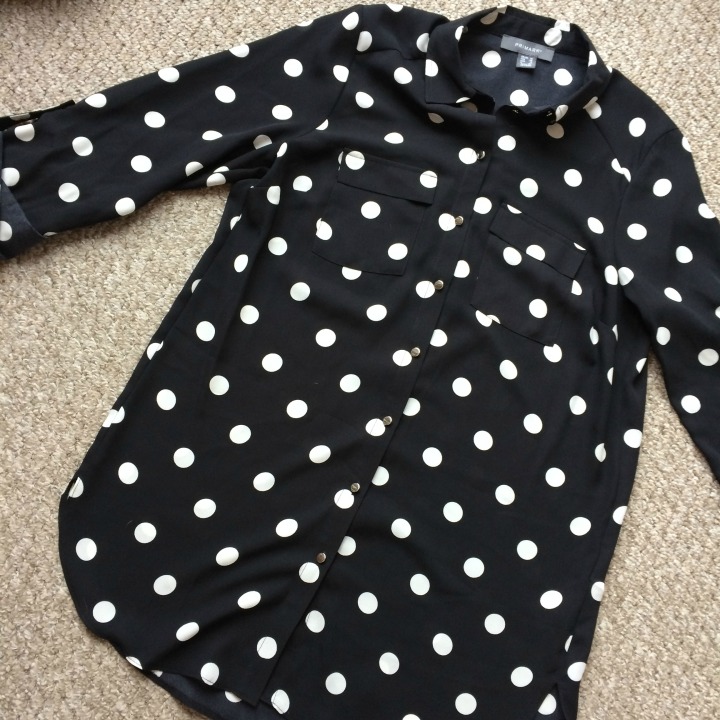 I also couldn’t resist this sweet little tea dress (well, it’s a tea dress, you know?) Yellow isn’t a colour I own a huge amount of, but it always makes me feel cheery so I decided I needed to add a little more to my wardrobe to brighten things up a bit! Lastly, the only white flats I have are peep toe, which isn’t the most versatile in this lovely rainy country of ours. A lot of my Summer dresses look good paired with white though so I’ve been on the look out for some more for a while now, and these Valentino style studded ones were just the ticket!

Having had a sneak peak at their holiday collection, something tells me this won’t be the last Primark binge I have before Summer hits…. Not gonna lie, I mentally spent most of my next pay packet yesterday while browsing the bikinis…! Tune in next month to see what makes the cut!

6 thoughts on “Moments of Weakness – February”

Busy day! Bailey’s last swimming lesson for a while till we’ve worked out what life with twins looks like - I feel a bit sad about that as he loves it so much but hopefully it’s not for long. Then we survived a trip to IKEA and Bailey kindly tested out the new twin buggy for us, which we love except that we can’t collapse it but I’m sure we’ll learn 😂 Little man was such a good boy he got treated to some Colin Caterpillar cake at M&S which I may or may not have eaten quite a lot of also…🤫
Bit of a rant today. You may have already seen it on my stories yesterday, but it’s annoyed me enough to give it a square… I’m no different to I’m guessing most women on here in that I get unsolicited messages from creepy men. I had a massive follower cull last year and started monitoring my notifications more closely and it calmed down, so I relaxed a bit. But now they’re all back in their droves, and mainly because I’m pregnant (though a few are here for my feet too, it seems…) Some people are into feet and pregnant women, I get it, good for you and everything, what you like doing in the bedroom with other consenting adults is your biz and I’m not here to judge. But here’s the thing, I am NOT one of those consenting adults. I’m just a happily almost-married mother, who enjoys talking about clothes and shoes and her experiences of pregnancy and parenting with like minded people. There is nothing on my account to suggest I want to hook up. There is nothing sexual about my content. There is absolutely nothing in my profile that suggests I’m open to sending you some ‘special’ content, paid or not! So STOP ASKING!!! I know there are people who will suggest it’s an expected part of social media, but I call bullshit on that. We need to stop normalising the idea that it’s ok to treat human beings as objects for your personal gratification, whatever the platform. I take my bump outside in the street around perfect strangers everyday, am I asking for it then?? Should I just hide indoors until I’ve given birth lest my BABIES turn someone on?? B******s to that!! I shouldn’t have to police my content. I shouldn’t have to make my profile private and potentially miss out on some of the genuine connections I’ve made here. I should be able to enjoy a pastime I’ve come to love without being bombarded with requests to pleasure people because they are too tight to pay for adult content where it is being provided by willing participants. I know this post won’t make a difference, and I’m not going anywhere, but I just wanted to say ENOUGH ALREADY! JUST STOP!
So, people keep asking me how I’m going to cope with a toddler and twins, but honestly, I’m more worried about coping with the dog! She’s been an absolute pain in the backside today, deciding she wants to be in whatever room I’ve just closed the door from, wanting to go outside, wanting to come in again, barking incessantly! I swear she is far more needy than Bailey! I wouldn’t change her for the world, but it’s going to be a challenge for sure! Here’s a quick pre-weekend swish I managed to capture just before she woke the boy up early from his nap… 🤦🏻‍♀️
Had to give my favourite #newtome Bodens a #fridayfeet square, didn’t I?! Velvet, metallics and a bit of bling - they’re the perfect festive winter shoe! And best of all, they’re flats, so I’ll be getting to wear them lots even if there won’t be many Christmas parties in my diary this year!
Never have I been more pleased to get changed into a dress than today! We spent a very long morning at the hospital having our last growth scan and have finally booked in a date for our section! Won’t be sharing it as these things so often don’t go to plan, but needless to say I feel equal parts thrilled that we have something to anchor to and overwhelmed that it seems so soon and so final! I’m really going to miss carrying these little monkeys around in my belly even though they are causing my back, bladder and sleep all kinds of grief! Anyway, last time we were at the hospital we waited around for an appointment that didn’t exist, this time we had the opposite problem and almost as soon as I found out we’d be seeing the consultant straight after the scan I realised I was desperate for the loo, but couldn’t go as they’d need a sample 🙈 thankfully I didn’t have to wait long but there was an awful lot of paper work and consent forms to fill in and I was a hot, sweaty mess by the time we were done! Seems ironic that I normally whinge about the end of summer, but just as I say I’m ready for autumn the sun comes back 😂
I miss this. Time to arrange another at home date night I think. With less wine though, sadly…
Loading Comments...
%d bloggers like this: